The Rise and Fall Of the Bitcoin Stock-to-Flow Model 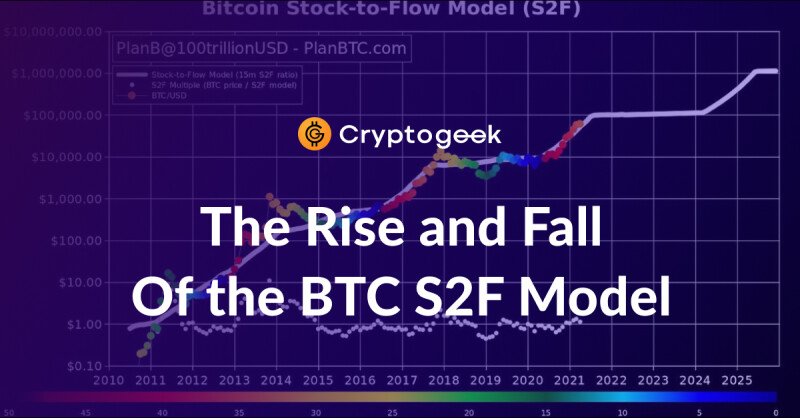 There have been many attempts to predict the future prices of Bitcoin. To see where the price is heading investors use Bollinger Bands and other popular indicators. However, this time we will talk about the model that became one of the most popular in the cryptocurrency field. Not only it's popular but is still considered to be one of the most accurate. It is known as the Bitcoin Stock-to-Flow model. It was first published in March 2019. According to the S2F model, the price of Bitcoin is going to reach 1 million dollars per coin by 2025. Let's see if this model makes sense and what role it plays in attracting more investors to Bitcoin.

Bitcoin and the Stock-to-Flow Model

The Stock-to-Flow (S2F) model is not something new. Stock-to-flow is an indicator showing the relation between the amount of the commodity in stock to its production amount per year. Usually, S2F was mentioned with hard-to-produce commodities with limited supply. Gold and silver are the most obvious examples here. As Bitcoin (sometimes referred to as a "digital gold") is scarce and is hard to mine by design, the stock-to-flow model appeared to be relevant for this asset, as well. Currently, Bitcoin has a smaller stock-to-flow ratio than gold but bigger than silver, and this ratio will grow bigger as the mining rewards will continue to decrease.

The total supply of Bitcoin is limited to 21 million. While miners validate the transactions on the network and keep it safe they receive rewards. In the first years, miners were rewarded with 50 BTC per block. The reward was set to reduce in two once every 210,000 blocks (roughly every 4 years). The current reward is only 6.5 BTC per block while mining has become much more resource-consuming since the inception of the Bitcoin network. The next halving (decrease of the reward in 2) will take place in March 2024. Although over 18 million of 21 have already been mined, mining will continue until 2140 as miners will receive increasingly smaller rewards for their job. The stock-to-flow ratio of Bitcoin will keep on increasing due to halvings. Some consider it causes the constant increase of Bitcoin's price in the long term.

The S2F model for Bitcoin was introduced in 2019 via a Medium article written by Plan B, a popular anonymous Dutch investor, and Twitter personality. He shared a graph showing the relation between Bitcoin's stock-to-flow ratio and the asset’s price. The graph includes the prices of BTC from December 2009 to 2025. The colored line showcases the price at a given moment in time. The colors indicate the time before the next halving where dark red color stands for 40 months while dark blue is zero months. The experience shows that in 20 to 30 months (yellow and orange segments) before the next halving the BTC price was going through surges. 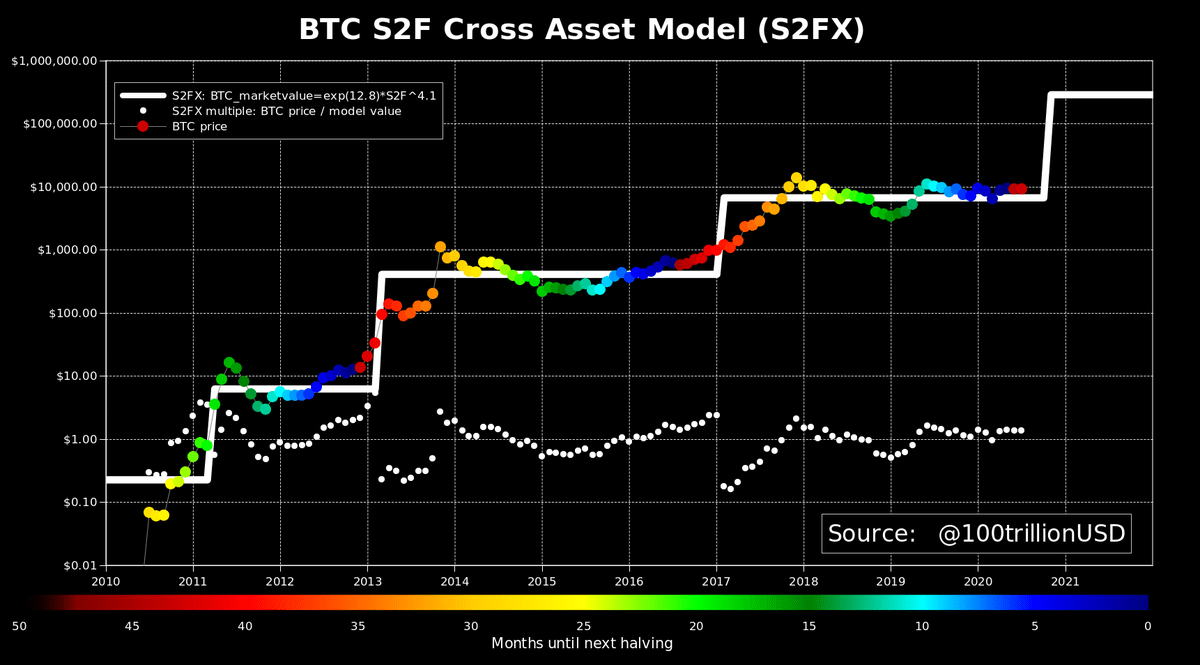 The graph posted by Plan B is very optimistic for long-term investors as it implied that in 2021 the price of Bitcoin was going to reach $100,000 and then rise to one million dollars per coin in 2025. Apart from wishful thinking, there was one more thing that made the Bitcoin S2F model popular: the graph posted by Plan B matched the previous 9-year period. The graph is not quite accurate, but in general, its retrospective extrapolation is close to the historical BTC price data. It still makes some people think that the future prices that are shown in this graph (until 2025) reveal the future development of the BTC price to us.

Is this model really so great? Well, no. Despite the popularity it gained, the Bitcoin S2F model can't be seen as a reliable price prediction staple. In his Medium article, Plan B says that the connection between stock-to-flow and Bitcoin's market value is strong and that there is no probability that this connection is caused "by chance". What seems strange here is that he didn't try to find alternative reasons, different than "chance". Later, Plan B said in an interview with Forbes that his S2F model ignores such factors as demand which is associated with the intrinsic value of Bitcoin. To this day, experts have no consensus over Bitcoin's intrinsic value. More than that, each of us can easily create a scarce product, for instance, draw a picture. This picture will be scarce (as the original without copies) but will it have value if no one wants to possess this picture? The same goes for Bitcoin. The S2F model doesn't consider the level of demand for Bitcoin, it only shows how many coins are released every year and how many remain unmined, and the future price that is based solely on this. If this graph didn't match the past 9 years of price movements, no one would have cared about the Bitcoin S2F model. In fact, for 2 years the S2F model has been one of the most precise models for Bitcoin price forecasts despite the known flaws.

In 2021, the reliability of the S2F model was harmed. In 2021, for the first time since the model's emergence, the real price has seriously deviated from the graph. The big crypto rally unleashed in early 2021. According to the initial Plan B's prediction, the BTC price was going to reach $100,000 this year. However, as we know, at the peak the price didn't even reach $65,000. Interestingly, in the first half of 2021, Plan B himself claimed that the worst scenario for 2021 is $135,000 per 1 BTC by the end of the year while at best it can hit $450,000. This optimistic suggestion was contradicting not only the reality but also Plan B's model itself. At some point in July of 2021, the BTC price experienced the biggest deviation from the S2F graph in 10 years. At the lowest point, the price was only 27% of the amount predicted by Plan B's S2F model. Although the price has grown since July, it is still far from $100,000.

One of the possible reasons why Bitcoin "underperforms" is that Plan B's projections were made when Bitcoin's dominance on the crypto market was much higher. The adoption of cryptocurrencies is growing faster than the BTC price and the share of Bitcoin on the crypto market got thinner. If the S2F model was considering such changes it would have probably been more accurate.

The Bitcoin S2F price evaluation was reflecting the approximate price direction in the past and is still relevant for this purpose as we don't see the price changing its trajectory drastically nor do we expect that the BTC price will drop below $30k and won't recover. Will Bitcoin hit $100,000 in the future? Well, if it happens in 2022, the S2F model proponents will claim that Plan B rather was right than wrong although as of early September 2021, the price is almost two times below what has been predicted. The connection between Bitcoin value and its scarcity continues to draw criticism. In July of 2021, the question if the S2F model should be invalidated was raised in the cryptocurrency media.

The Role of the Bitcoin S2F Model

As the Bitcoin S2F model, in general, matches the BTC price trends, promises huge gains in the next couple of years, and has some scientific vibe, initially it was met with much enthusiasm. Even now, when it's clear that the reality is more complex than the graph, people still praise Plan B's brainchild and expect that the future price will follow the path mapped by him.

This has been a wild ride: 3 years, 3 articles, 30 interviews. So much energy and great people in this space. Honored to be part of this epic journey🙏 pic.twitter.com/WXx2KXisa3

The article on Medium was translated in dozens of languages and is referred to sometimes as one of the fundamental works on Bitcoin. The model described in the article is subjected to constant analysis and adjustments by other authors and became a common element for the BTC investment calculations. Some use the S2F ratio to estimate if the current Bitcoin price is undervalued or overvalued.

What's more important, some cryptocurrency industry professionals find the S2F-based BTC price prediction convincing, too. For instance, the CEO of ZB.com, Omar Chen, said in an interview with Cryptogeek that despite short-term price fluctuations against the value outlined by Plan B, the long-term prediction remains correct.

It is hard to tell if optimism originating from the S2F model has played a serious role in the latest bull market when both institutions and enthusiasts have flocked to Bitcoin. In fact, we won't find many people working in the crypto industry who, like Chen, refer to the S2F model. In the same interview, Chen names a lot of other factors that have made Bitcoin an attractive asset for big players and doesn't associate the S2F model's popularity with it. It seems that although Plan B's article became an object for further research, it's more popular among amateur investors. Instead of relying on one-dimensional (in the case of S2F this dimension is scarcity) models, institutions and corporations have the power to shape the future trends of the Bitcoin market themselves (for instance, we can remember the case of Elon Musk's influence). However, we cannot deny that the S2F model makes the Bitcoin fanbase edgier and still ignites its trust in the "digital gold" up. 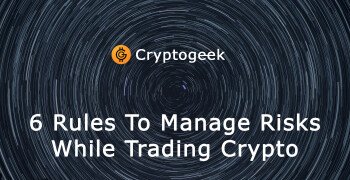 Jan 26, 2023 0
bitcoin blockchain cryptocurrency trading btc price prediction twitter s2f stock-to-flow plan b
The opinions and assessments expressed in the text are the views of the author of the article and may not represent the position of Cryptogeek. Do not forget that investing in cryptocurrencies and trading on the exchange is associated with risk. Before making decisions, be sure to do your own research on the market and the products you are interested in.