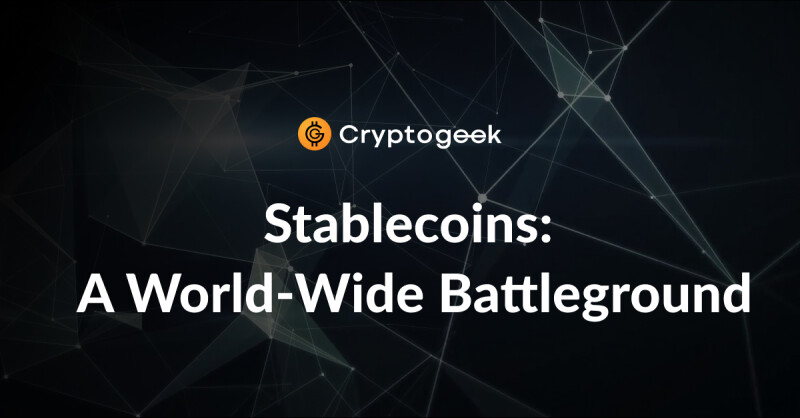 Back in 2017, stable cryptocurrencies (stablecoins) seemed exotic against the background of volatile cryptocurrencies such as Bitcoin, then in 2019 they were at the center of world political events: the defeat of the Libra project by the US government, the international condemnation of non-government stablecoins at the G7 summit, the intensification of work on the creation of state stable currencies in Europe, China, etc. Why is there a stir around stable currencies? Will the state try to crush this asset class by force or enter into market competition with it? What stable currencies are popular today and what are their prospects?

When in 2013 the whole world learned about Bitcoin, many people of libertarian views saw in it the Holy Grail of a free non-state market. But economists noticed that BTC does not have all the properties of a good means of payment, which Friedrich Hayek once wrote about.

The strength of BTC lies in its ability to reliably exist without a state, but the weakness lies in the extreme instability of the rate (volatility). The emission of BTC and other classic cryptocurrencies is algorithmically limited and predictable. For this reason, they cannot be devalued by the sudden start of the printing press, but the rates are extremely dependent on the vagaries of the market: the network lacks a centralized mechanism for suppressing pumps, dumps, and bubbles. If someone uses BTC as a means of payment, it is advisable that as little time as possible elapses between the acquisition of BTC and their spending - otherwise you may become a victim of another sudden collapse of the rate.

In 2014, the first stable cryptocurrency projects started - CoinoUSD (XUSD), NuBits (USNBT), and BitUSD (BITUSD). All three currencies, as the name implies, are tied to the dollar. However, the stability of the first two rested on an “honest word”, and the projects failed. But BITUSD used the reserve fund in the volatile cryptocurrency BitShares (BTS) to stabilize the exchange rate, and its stability turned out to be much higher than that of other pioneers.

In 2015, the first truly famous stablecoin was launched - Tether (USDT). Like BITUSD, it was pegged to the dollar and used a stabilization fund. The main differences were that the fund was made up of real dollars, and the currency itself had a single issuer - the company Tether Limited, which has close ties with the Bitfinex crypto exchange.

Unlike most other cryptocurrencies, USDT turned out to be centralized and tied to a specific company. Centralization and quickly established cooperation with Bitfinex, Poloniex and other large exchanges allowed to promote the project and far ahead of competitors. In 2017 USDT turned out to be a de facto monopolist among stable currencies.

By the end of 2017, the USDT capitalization exceeded $ 1 billion, but this success led to a scandal: if every USDT is provided with a real dollar, then where does Tether Limited store this amount? For a while, the company shied away from an answer, but when opacity threatened its popularity, some cards had to be revealed: a reserve fund still exists. However, to this day it is unclear whether it now fully provides the $ 4 billion capitalization.

In 2017−2018, several new projects of stable cryptocurrencies appeared, designed to solve the problems of their predecessors.

One of the directions was to copy the USDT experience but to make the currency more transparent and strictly legal. So there was USD Coin (USDC), True USD (TUSD), Paxos Standard (PAX). Although private companies such as Coinbase and Paxos also took part in creating these currencies, the coins turned out to be less centralized (for example, allowing several issuers), and their reserve funds were open to regular audits. But the reverse side of the legality of these coins was their actual non-anonymity: sellers are required to go through the identification procedure.

Another example of a legal currency with transparent reserves in traditional assets is Euro Stasis (EURS). From the above coins, it is distinguished by a binding to the euro, and not to the dollar. In addition, EURS has a Maltese jurisdiction, where the attitude to cryptocurrencies is more liberal than in the United States.

We also note the Digix Gold (DGX) coin from the Digix Decentralized Autonomous Organization (DAO). It is not tied to currencies at all but to gold.

Another direction for the development of stable coins was the reservation not in traditional assets, but in cryptocurrency. At the same time - the utmost decentralization while maintaining anonymity. Although the long-standing pioneer of this approach, BITUSD has not gained popularity, the idea of ​​reservation in cryptocurrency has its advantages. Cryptocurrency reserves are volatile due to exchange rate fluctuations but are more convenient to use and better allow for deep automation through smart contracts.

The most famous example of a modern currency with cryptocurrencies is Dai (DAI) by DAO Maker. Here, ether is used as a backup, smart contracts of which ensure the transparency of the system. Today, DAI is considered one of the best examples of a truly decentralized approach among blockchains. On the NASDAQ exchange, the Maker token (MKR) is part of the EXANTE DeFiX Index.

2019: Stable cryptocurrencies - a threat to the world order?

In 2019, USDT was fixed on the fourth line of the world cryptocurrency rating by capitalization. Moreover, not one of its competitors was able to enter even the top ten.

The stablecoin market has ceased to be as monopolized as in 2017, but its participants were faced with a choice: use the popular, but centralized and scandalous USDT - or more transparent, but much less popular USDC, DAI, etc. It was logical to expect the appearance of a new project, which combines legal reliability and powerful marketing opportunities. It turned out to be a stable currency Libra from Facebook.

With a billion-dollar user base, Libra had excellent chances to outshine competitors and even shake the position of national currencies - including the dollar. Libra as a non-state, but stable coin could be closer to Hayek's ideal than volatile Bitcoin or ether. Although, from the point of view of the ideals of the free market, attachment to a giant corporation is a drawback, a significant part of the population would easily come to terms with it in exchange for exchange rate stability and free movement of coins between the borders of countries.

However, the dollar does not like to be challenged by its hegemony. If in June Libra seemed a serious bid for the redistribution of world financial power, then in July, American politicians actually stopped the project. President Trump and Minister of Finance Mnuchin have criticized cryptocurrencies for their involvement in illegal activities. Facebook was required to obtain a banking license and play according to traditional rules without claiming the role of the “second FED”. Parliamentary hearings on Libra were unsuccessful, and a bill banning the largest companies from issuing cryptocurrencies was submitted to Congressmen for consideration.

The epic with Libra not only interfered with FB's plans but also cast a shadow over all private projects of stable currencies. At a meeting of the G7, a united front criticized initiatives such as threats to world stability. It was a coincidence or not, but soon after the summit against Tether and Bitfinex an unprecedented lawsuit was filed for more than $ 1 trillion, which could well lead to the bankruptcy of companies.

Another trend in 2019 was a sharp interest increase in state cryptocurrencies. Including - as a potential weapon of central banks against non-state stablecoins.

State blockchains promise many advantages to governments. They can combine the convenience of transactions like cryptocurrencies, exchange rate stability, and legal reliability like fiat, as well as potentially unlimited possibilities for controlling the movement of funds. All these opportunities have been discussed for more than a year, but until recently, governments have not rushed to such projects.

The exception was the pro-Venezuelan blockchain Petro, which only discredited the idea of ​​state crypto: it was not possible to maintain a stable course, nobody developed reserve “petrol fields”, and in many cases, Petro was forcibly imposed on people, preventing them from using alternatives.

However, the threat of Libra and similar projects returned politicians' attention to the state-crypto. In October, a group of German bankers called on EU officials to join forces to create a digital euro. Then the Chinese leadership announced great progress in the development of the digital renminbi. And in November, it was announced about the possibility of introducing an interstate blockchain for the BRICS countries.

With high probability, now it is not only with political declarations, but also real plans. Indeed, despite the failure of Libra, there are already several popular non-state stablecoins in the world, and not all of them can be prohibited by a simple decision of regulatory authorities. If sooner or later, citizens have an attractive option for a global non-state stable currency, then it will be wise for governments to have not only strong arguments but also a competitive alternative. In matters where anonymity is important, the population would prefer a private blockchain, but where reliability is more important (including, for example, the reversibility of erroneous payments to a vindicated fraudster), government currency would remain preferable.

2020: What awaits stablecoins next?

Despite the general trend “for state stablecoins, against non-state ones”, it would be naive to believe that the world will soon turn into a “digital financial concentration camp”, where the only means of circulation will be state blockchains with control of all transactions.

It is very likely that in 2020 we will see a parade of state projects of stable currencies. But it is unlikely that this will be accompanied by a tough fight with all competitors.

Although the G7 Summit spoke out against stable currencies per se, the main target of government agencies today is stablecoins from specific corporations. The Libra project was obviously inhibited due to fear of the scale of the company and its potential transformation into a virtual superstate. As for Tether, on a smaller scale, it is still uncomfortable with its simultaneous combination of centralization around the company, opacity, and anonymity.

Due to their transparency and strict legality, such projects as USDC, USDT or EURS are unlikely to face state repression: they play by the rules. Already, their total capitalization is approaching $ 1 billion.

The fate of decentralized systems like DAI remains more uncertain. On the one hand, it is much more difficult to ban them than corporate projects. On the other hand, they do not claim the role of new centers of power. They threaten the power of central banks, but not in order to transfer it to someone else, but in order to "disperse it in the air." Perhaps they are “enemies of the world order”, but clearly not “enemies number 1”. And therefore ... perhaps they will ultimately win. Although DAI has a capitalization of $ 60 million so far, the capitalization of its developer, Maker DAO, has already exceeded 500 million. And, unlike the capitalizations of most blockchains, it only grew in November.

Banks Are Used For Money-Laundering In a Larger Scale Than Cryptocurrencies, New Study Reveals 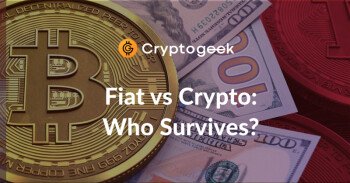 Will Cryptocurrencies Replace Fiat Money? Not the Perennial Question Anymore

Alli
26 January, 7:19 PM
The idea of stable coin contradicts the point of the crypto market. It could be profitable for a while, but I thought the main ideological aim of the crypto market is destroying the common bank-money system. There is a lot of something to think about. What if the dollar goes down and how the cryptomarket should react then? If there's less relation between cryptomarket and the Jamaican monetary system then it means bigger independence and variety.
cryptocurrencies (67) cryptocurrency market (58) altcoins (51) bitcoin (50) trading (42) cryptocurrency exchange (27) guide (27) prediction (26) blockchain (25) ethereum (25) price prediction (20) price (18) basics (15) security (14) news (13) list (13) distributed ledger technology (12) binance (12) btc (10) mining (9)