What’s the Difference Between Proof of Work and Proof of Stake Cryptocurrencies? 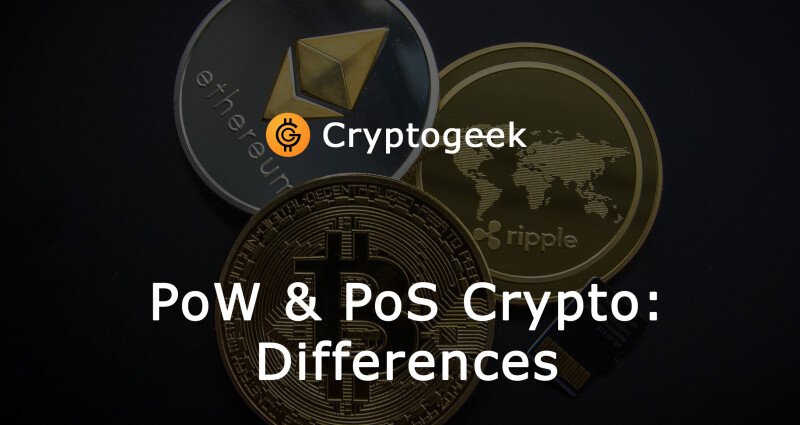 While fiat currencies such as dollars, euros and naira are regulated by the central government which distributes them and all online transactions made using them can be authorised by the relevant authorities, cryptocurrencies work in a slightly different way. Given that one of their major selling points is their decentralised nature, they must rely on different methods of authorising transactions.

Generally speaking, these methods fall into two distinct categories: proof of work (PoW) and proof of stake (PoS). However, for those who are only just beginning to learn about how the sector works, crypto terms like these can create more questions than they answer. With that in mind, this informative article aims to clear up any confusion over how the two disciplines differ and the advantages (and drawbacks) of both.

How does PoW work?

Both PoW and PoS are known as consensus mechanisms which verify the authenticity of a cryptocurrency transaction. However, both go about it very different ways.

The former was created by Bitcoin pioneer Satoshi Nakamoto, who wished to devise a method of validating transactions without the need for a centralised third party. To do so, he set complex mathematical problems which can only be solved using significant amounts of computing power. The resources which go into solving these problems means that it would not be time- or cost-effective for a hacker to try to game the system. Those who do devote the requisite resources to the process are known as “miners”. The first miner to solve the problem wins a reward in the form of additional tokens of the cryptocurrency in question.

But while this form of verification is safe and secure, it’s inefficient and costly for the planet. The vast amounts of energy used are not sustainable in a world which is ever more conscious about its ecological footprint, while that computing power means transactions cannot be processed quickly.

How does PoS work?

Step forward PoS. Devised as a direct response to address the inadequacies of PoW, PoS dispenses with the mining and mathematical problems aspect of cryptocurrencies in favour of “staking”. Owners of assets will stake their wealth as collateral for the transaction, with it only achieving verification once a certain threshold has been reached. At this point, their stake will be refunded to them and they will also have an opportunity to win a fee for approving the transaction.

The beauty of the PoS lies in the fact that it is in the interests of all members to prioritise the authenticity of the transactions in question, since they will have a chance at receiving a reward for doing so. Meanwhile, hackers are discouraged from putting forward dishonest transactions, since they’re at risk of losing their entire stake if their deceit is discovered – as it inevitably must be.

PoS is superior to PoW in that it consumes a fraction of the amount of energy and in that it can handle a significantly higher number of transactions simultaneously. It can also process those transactions much more quickly. On the other hand, this very advantage could become a drawback if a malicious actor were to perform a “double-spend attack” by spending the same funds twice before the first transaction could be verified. There is also the argument that PoS gives greater opportunities to those who already have a larger amount of assets, thus promoting a “rich get richer” ethos. However, its supporters counter that PoW does the same, since those miners who can afford better equipment will have a greater chance of solving the puzzle before others.

While the jury is still out on whether PoS is better than PoW, there is certainly plenty of evidence that it can help the world of cryptocurrencies from an environmental and an efficiency standpoint. Watch this space for further developments going forwards.

pow crypto pos cryptocurrencies differences
The opinions and assessments expressed in the text are the views of the author of the article and may not represent the position of Cryptogeek. Do not forget that investing in cryptocurrencies and trading on the exchange is associated with risk. Before making decisions, be sure to do your own research on the market and the products you are interested in.