Mainnet Meaning and Difference From Testnet 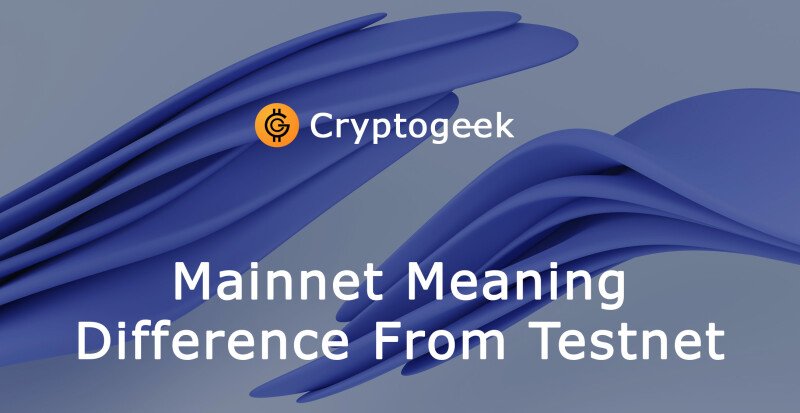 The crypto space is full of bizarre puzzling terms – blockchain, staking, proof-of-work (most of them we have covered in our articles, by the way :). Mainnet and testnet are among them, and they can be heard quite often: Harmony has a mainnet upgrade, Vesto migrates from testnet to mainnet, etc.

Although these two are somewhat intuitive (the words “mean“ and “test” serve as powerful clues), we better dig deeper into the topic and discover:

A scheme comparison of Ethereum’s testnet and mainnet

What is a Mainnet?

When we think of a fully functional, “grown-up“, we always think of its mainnet. Developers launch on a mainnet when they have fully tested out their product (with the help of beta-testers or within their team) and are ready to go live.

Mainnet allows for transactions with actual economic value to be recorded on the blockchain and then verified through PoW or PoS algorithms.

If the project has launched on the mainnet, it means that the developers have full trust in their Blockchain platform and are ready to present it to the public.

The mainnet implies a ledger of transactions which is available for everyone. This fully embodies the principle of crypto: transparency and verification by the public.

What is a Testnet?

Originally, all cryptocurrencies launch on a testnet. It is a testing environment that mimics the functioning of the mainnet and allows devs to play around, try out how their solutions work in real-life situations and troubleshoot the potential bugs.

Testnets are not open to the general public, and if they are, no real money can be spent within them. All transactions that occur within the system are not recorded on the ledger and do not use real cryptocurrency. For this purpose testnets use tokens as a kind of “mock money”. These are subsequently transferred into coins in a process called “mainnet swap“ (we’ll talk about that later).

Since all transactions in the testnet do not involve real-life crypto, it is a great environment to test out the functioning of the coin without paying any fees.

Mainnet and Testnet in Action

The typical roadmap of a crypto project at its infancy looks something like this:

A page from the crypto history annals: during the 2017 hype a lot of startups entered the testnet phase and issued their own ERC-20 compliant tokens (also see below) on the Ethereum platform. These attracted substantial investment, because everyone was hoping to get a piece of the next big thing. But eventually most of these projects failed during the mainnet stage, and investors lost their money.

While in the testnet phase, many projects release their native tokens to help with funding. These tokens are generally kept within the Ethereum network and comply with the famous ERC-20 standard (which is too technical to discuss in depth here: just know that it requires for a token to have basic marketing info like a name and a ticker and facilitates compliance with different platforms and dApps).

When the time for mainnet comes and developers are moving to their personal platform on the blockchain, the project overgoes the so-called token migration: old tokens are swapped for new coins with a 1:1 ratio. The remaining ones (the ones that were not reclaimed by the holders) are being burned, as happened in the Tron case (we’ll dive into that later).

These swaps can be held in different manners: some projects make the process automatic, while others set a deadline for the migration.

It also has to be noted that the platform migration may not only take place in a “Ethereum => your own blockchain” manner; some are migrating from the Bitcoin to the Ethereum platform.

Effects of Mainnet on Price

Let us example two illustrative cases of mainnet launches from 2018 to see how this process may affect the price of a newly minted coin.

Golem is a project that makes laborious computing operations (mainly image and video rendering) cheaper and faster and at the same time allows users to monetize their unused computing power. We’d like to note that in their crowdfunding effort they raised an impressive 820,000 ETH.

During the testnet phase, Golem opened up Beta-testing for everyone in return for fake tokens, tGNT instead of real GNT (thus the company aimed to encourage enthusiasts instead of those who are just llooking for an income).

In this case, the mainnet launch had a short-term impact on the coin price, but did not help it in the long run. Although the performance of the stock is quite decent, and we have quite an optimistic price prediction for it.

The notorious rivals of Ethereum celebrated its Independence Day (as the companies Twitter put it) on June 25th. In the process it burned 1 billion tokens, which is equivalent to $50 million. However, the mainnet launch did not bring any significant bump – the Tron coin even saw a gradual decline over the end of June (the day of the launch is pointed out with a dot on the graph).

To discover the potential reasons for this, we have to consider the project’s essence and public image.

Firstly, Tron has been widely criticized for potential plagiarism. Big chunks of its codebase were allegedly stolen from the ETHj library without giving the source any credit. This along with other instances of borrowing led to frequent heated debates between Justin Sun, the CEO of Tron, and Vitalik Buterin, the Ethereum chief. It might be decent black PR, but it’s not good for the project in the long run.

Secondly, the staking system of Tron might be at play here. The project functions on a proof-of-stake algorithm, but instead of making everyone to participate it allows only for 27 block validators which are called Super Representatives. The SRs are democratically elected (each token counts as one vote, and one has to acquire 100 million votes to win the position), but the whole process is being criticized as centralization as opposed to the main principle of crypto. The election began on June 26, the day after the mainnet launch, and it vaguely coincides with the gradual decline of the coin price.

Despite all this, Tron is still ranking #13 on CoinMarketCap, so if you want to stock up on it, we have a guide for that.

To sum it up, the mainnet launch might bring some short-term hype for the coin, but generally it doesn’t have any significant impact on its price.

Hopefully, we’ve been helpful in drawing the line between mainnet and testnet. Now you know that the latter is a crucial part of the project history and a great environment for enhancement; but no project is fully up and trustworthy without the former.

blockchain crypto Testnet mainnet
The opinions and assessments expressed in the text are the views of the author of the article and may not represent the position of Cryptogeek. Do not forget that investing in cryptocurrencies and trading on the exchange is associated with risk. Before making decisions, be sure to do your own research on the market and the products you are interested in.