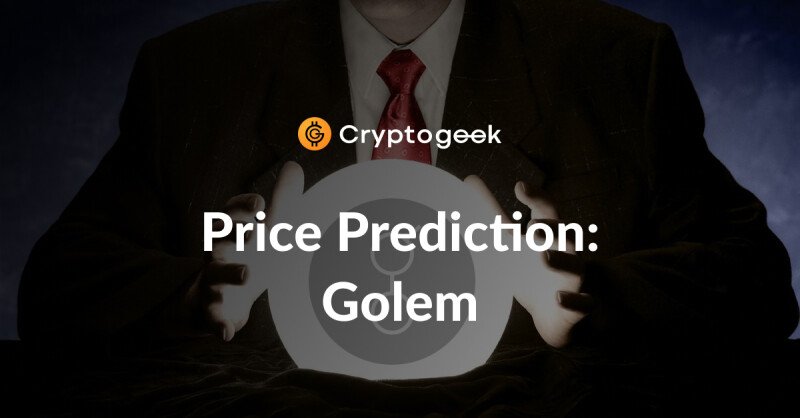 One of the best-known implementations of blockchain technology is sharing computing power and creating virtual computing machines. Ethereum is one of the largest platforms to provide such functionality. However, that's not the central purpose of the Ethereum blockchain and not the main reason why it gained popularity. Golem is probably one of the most successful companies focused on the exchange of computational resources.

As many people have the computers that are not used at full force 24/7 it's understood that they might be eager to sell the unused power to others. Such a practice is good in terms of the macroeconomy and also that's quite an eco-friendly approach as the lesser amount of physical machines will do the same work as before.

Golem is not the only platform created for that purpose. Ethereum Classic is one of the rivals. However, the future can bring more players. Currently, the GNT token is one of the top 100 cryptocurrencies by market cap and we can predict if the asset is going to leave this list or climb higher in the following years. To do so we will consider the past market trends experienced by GNT and see if the project has anything to offer to the major public in the future. But first, we will provide some details about the Golem platform itself.

Golem network is a decentralized marketplace for the trading of computing power. Golem includes a peer-to-peer network, a trading platform that uses Ethereum smart contracts for transactions, and the instruments for creating dApps (gWASM). The Golem supercomputer is open-source. The owners of powerful GPUs and CPUs or entire data centers can rent out the unused capacity to people in need of power. Usually, the virtual machines are used for computer graphic rendering (it doesn’t matter if it’s done with CGI, Blender, or something else), for scientific research or for large businesses that have a vast documentation flow and process numerous computer operations. It is possible to join a trusted network of computers. The delivery of power through Golem is compensated with rewards paid in Golem Network Tokens (GNT).

The power is aggregated so the platform can be used for renting huge amounts. People who lack enough computing power can look for it on Golem. They can specify the desired rendering duration and the number of active subtasks. Another feature is that those who rent the capacity can specify how much they are willing to pay per hour. So the platform is good for both sides.

The Golem is built on top of the Ethereum blockchain. The ICO was held in late 2016, long before the cryptocurrency fever. During the ICO, the GNT price was set at $0.01. Since that moment the token has gained significant value. Currently, GNT is listed on several huge exchanges however most of the liquidity is coming from the CoinEx exchange. The project was launched in Switzerland by Julian Zawistowski, an entrepreneur from Poland. The CEO of the project is Piotr Janiuk.

The team has big plans for developing a large-scale decentralized platform providing diverse services. Although the company is not doing much in terms of marketing, the project has great potential and gained enough popularity to keep on developing. Golem had a harsh time in 2019 when the team failed the deadline, however now it seems that Golem is still capable of continuing the work. Let's see how the GNT price was moving throughout the years.

By the end of April, the price reached $0.2. The growth continued in May. First, the price moved to $0.25 and after several days of relative stability, it has grown further, reaching $0.52 on May 24. Such a sudden rise in value (x25 in four months) is explained by the Bitcoin price influence. Those days, Bitcoin was gaining its value quickly (although not as quick as Golem). As usual, the BTC price played a huge role for the rest of the cryptocurrency market, attracting new investors and traders to join the industry and making other cryptocurrencies look interesting, as well. For a couple of weeks after May 24, the price of GNT was volatile reaching from $0.24 to $0.61. Although BTC was alright in the summer of 2017, the GNT price didn't manage to keep at the $0.6 level and dropped below. For the whole summer, GNT was quite low with a value of around $0.2 in the worst days and $0.34 at peaks. The fall of 2017 wasn't much better. Right on September 1, the price began to grow, reaching nearly $0.38 at the peak and gained even more value the same week. This surge coincided with the short BTC price spike. However, soon the price of GNT moved back to around $0.25 and kept at this level for the rest of September. In October, it began to drop lower and by November it dropped below $0.2. However, the same month Golem Network Token was listed on Huobi and it played a positive role for the token's price. Additionally, the entire crypto market started to grow insanely in late 2017.

On November 28, GNT reached $0.38. The following days the price was above $0.3 and finally started to grow in the middle of December. We all know what time was that — the overall cryptocurrency market was incredibly bullish those days as Bitcoin was moving to its all-time high. On December 21, GNT gained $0.75, updating the historical maximum. It took only 5 days to break this record again (at $0.78). On the sixth day, the price was already as high as $0.94 (at some point). On January 2, 2018, Golem Network Token has crossed the $1 mark for the first time gaining $1.09 by the end of the day. The all-time high for the GNT price was reached on January 8. That day the token price was $1.25. However, in the following days, the cryptocurrency market began to meltdown. January 15 was the last time when GNT price was above $1. In the course of two weeks, the price has shrunk by half. In February, it was oscillating at around 30 - 40 cents. Another surge happened in April when the token was listed on two huge exchanges — Binance and HitBTC. That month, the price climbed up above 90 cents for a while. Partly, this success was a reflection of the BTC price trend that was growing at that time, too. As the Bitcoin price started to decline in late May, the price of GNT started to go down, too.

In June of 2018, GNT dropped below $0.3. By the end of the summer, the price was already around 15 cents. September and October were quite stable with the GNT price in the range of $0.15 - $0.17. In November, the price dropped below $0.1. The winter was even harsher with the price range around $0.07. In February of 2019, GNT was trading at 5 cents. However, by March the price close to the values of January had recovered. In 2019 the project had delays in following the road map. It negatively reflected on the token's price. In April the price reached around 10 cents. It had ups and downs for several weeks and dropped to $0.07 by July. In August, the price declined to $0.05 and then was fluctuating between $0.04 and $0.07 until late November when the price had fallen below $0.04 (most probably it was the effect of the BTC price decline). In February 2020, the price began to grow quickly (together with most of the cryptocurrency market). Most of the time, the price was slightly below $0.07, but at some point, it peaked at $0.09. In March the price was declining and then dropped to $0.02 on March 13 (so-called Black Thursday, the day of the biggest downfall in the history of the cryptocurrency market). However, cryptocurrencies have shown perseverance and unlike fiat currencies, have recovered quickly.

Post March 13, Golem has been growing more or less steadily until January of 2022. The token has come through several huge spikes — the first one took place in August of 2020 (the price exceeded 13 cents) and the second one was in March of 2021 (the price reached 60 cents). Two more rallies took place in September and November when the price was reaching from $0.65 to $0.75 after corrections. By February of 2022, the price dropped to $0.33.

As we can see, in general, the price of Golem Network Token heavily depends on the overall cryptocurrency market trends. One can see it as a lack of independence but we rather consider it to be good news for investors as in the near future cryptocurrency market is going to grow bigger in terms of market capitalization and prices.

The following year, GNT has all chances to speed up its growth due to its own achievements alongside the overall market warmth caused by the BTC mining rewards halving. By the end of the year, GNT might gain a $1.7 price. By the end of 2025, Golem token isn't likely to make a huge leap. Most probably it won't exceed the $2.3 line. Golem will barely be one of the top platforms in 2030. According to predictions, its price will reach around $15 by that time.

Sep 08, 2022 0
altcoins ethereum price prediction price prediction cryptocurrencies ethereum classic golem gnt cryptocurrency market
The opinions and assessments expressed in the text are the views of the author of the article and may not represent the position of Cryptogeek. Do not forget that investing in cryptocurrencies and trading on the exchange is associated with risk. Before making decisions, be sure to do your own research on the market and the products you are interested in.