Touted on the official website as "passive income, security and accessibility", the FEGtoken is a part of the FEG ecosystem that includes NFTs and the FEG exchange called FEGex. There is the merch shop as well, dubbed FEGwear, and the FEGradio. 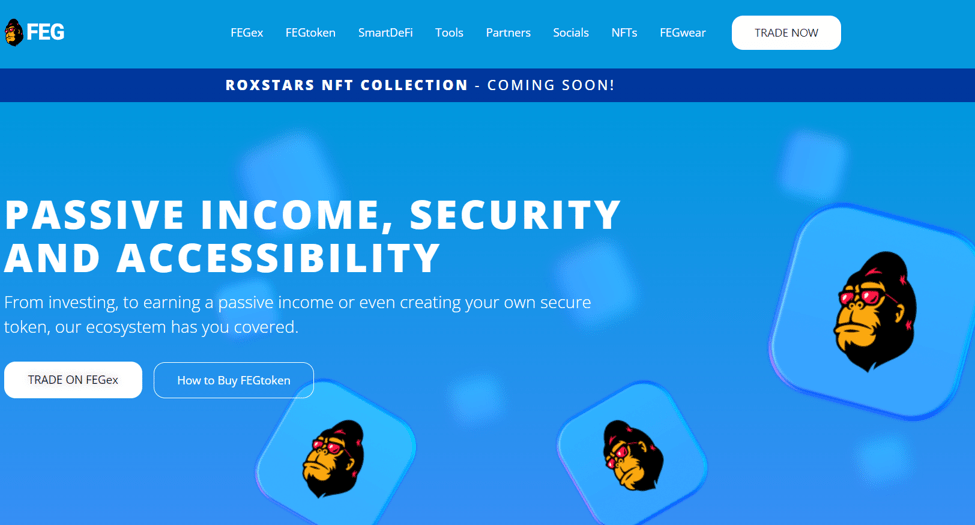 Read on to discover:

What Is FEG Token?

The burn rate accelerates with each transaction, which is at over 1% as of April 2022. This is allegedly due to the circulating supply decreasing every minute. All FEGtoken holders receive a piece of every transaction done in FEGtokens, which incentivizes holding through passive income.

According to the whitepaper, 2% of every FEGtoken transaction is distributed among all FEG holders depending on how much FEGtoken they hold. This includes the burn wallet.

FEGtoken can be staked on FEGex for more FEG Token income. Transactions done through SmartDeFi, accelerate[1]  the FEGtoken burn rate to act as another deflationary force on the price. The ownership of the FEGtoken smart contracts was renounced at the FEGtoken launch[2] , making it impossible for anyone to tamper with the token.

The stats tickers on the website show nearly a million FEG holders, with the market cap at $89.63mm. The tickers showing how much FEG is circulating, was burned, or is staked were stuck at "Loading…" for the duration of the review writing process. Finally, the last feature means 100% of the original FEGtoken liquidity was locked.

FEG stands for "feed every gorilla", as explained in[3]  the whitepaper.

What Is FEG Faucet?

FEG faucet is a FEG token dispensation service explained in the whitepaper as a feature that "aims to give to those who have little". It has 22T (presumably trillion) tokens in a perma-locked system that provides FEGtoken rewards to anyone who wants to collect them.

There is no preference for the poor; whoever claims the reward first gets it, though there is a 24-hour cooldown for each claiming wallet, after which that wallet may claim the reward again. Presumably, FEGtoken’s price will increase, which will make the faucet a lot more meaningful in the future and promote FEG token ownership.

As of April 28, 2022, the FEG faucet link displays "No faucet available on this network". This error message could imply it requires connecting a wallet first.

The website shows the names of several networks, including Binance Smart Chain and Ethereum, with the explanation that FEGtoken is available on both through separate supplies. The two will be merged and three more will be added, allowing more people to own FEG without increasing supply. This is the core description of FEGex, which is meant to work across chains.

The whitepaper reveals the existence of a CEXDEX, which is described as a "centralized feature within a decentralized environment". It connects different networks through a server that performs the logic that is inaccessible to a smart contract. Other no table features are:

fWrap is a byzantine reward system baked into FEGex that supposedly boosts the passive income gained through it. Any non-RFI crypto can be wrapped to create price pressure on a trading pair.

The gist of this feature, as described in the whitepaper, is that you can earn a part of the 1% reflection tax any time a token is transferred, wrapped, or unwrapped. This tax is distributed among all crypto holders and compounds.

Staking the FEGtoken earns the staker 0.12–0.15% of all sell volume paired against fWrapped base tokens. The FEGtoken’s annual percentage yield is tied directly to FEGex and SmartDeFi trading volumes.

The FEGtoken whitepaper is a 43-page PDF with the headline "building the Google of DeFi". The mission is described as not building a memecoin or a pump-and-dump scheme to do a rug pull through but an ecosystem that can solve the traditional cryptocurrency woes — privacy, fairness, transactional complexities, and outrageous fees. 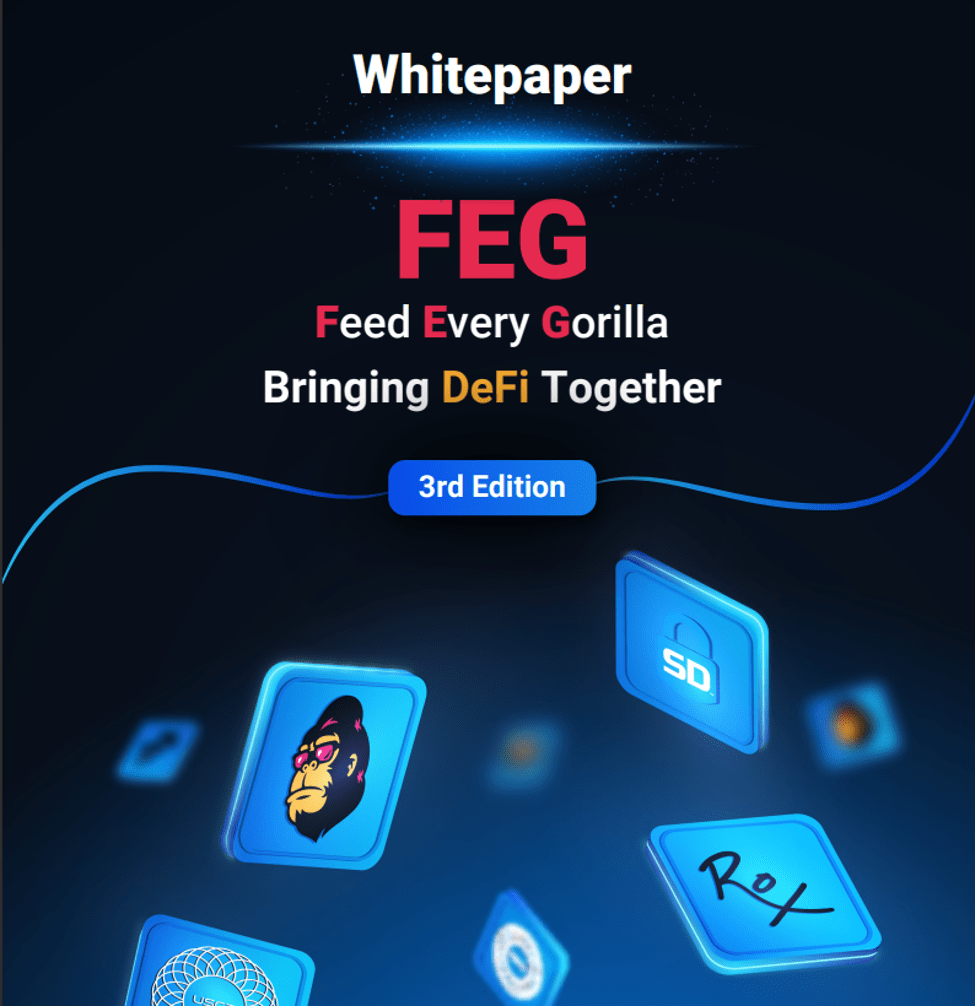 The selling point is passive income through owning NFTs and participating in decentralized finances (DeFi). Three stated goals for the future are:

USCT will have no decimal places and there will be no way to split it.

SmartDeFi was launched as a novel take on the DeFi concept and with 100% asset backing. In 2021, SmartDeFi saw the introduction of the ROX token, the first ever launched on it.

The SmartDeFi Deployer is described in the whitepaper as a part of the FEGdeployer and a way to deploy your own token. In turn, FEGdeployer lets developers launch a presale, though it incurs a 0.5% presale fee, which the FEGtoken developers will use to buy and burn FEGtoken.

All new tokens launched through FEGdeployer use the Smart Rising Price Floor feature, which grows the liquidity of a token to prevent radical price impact during buys and sells.

What Is FEG Token Used For?

As of April 28, 2022, these parts of the FEG ecosystem are listed on the official website under "Products":

FEGtrack is a wallet interface. Since no wallets were connected during the review research, the page was largely blank. FEGstats shows the real-time spot price of several networks and cryptos, such as Fantom and BTC. FEGcentral is a content hub for the FEG community, featuring news articles.

The programming titles indicate they have a counter-cultural orientation.

FEG token news is[4]  few and far between. Instead of FEG news, the devs focus on developing the other parts of the ecosystem.

The latest piece of news on the FEGcentral webpage was published on April 22, 2022. Titled "The price of your SD token", the article talks about creating a novel token on SmartDeFi.

FEG Token is legit. There is a lot of effort invested into it and there don’t seem to be any obvious signs of a scam.

Is FEG Token a Good Investment?

This section is neither an endorsement nor a condemnation of FEGtoken. Rather, it’s an attempt to depict the volatility of the crypto market and FEGtoken’s position in it. Any financial decisions you make are your own responsibility.

That being said, FEGtoken does not appear useful in the trading environment as fWrap is way too complex for the average investor. FEGtoken is only as good of an investment as the value you can extract out of the FEG ecosystem. If you can find a use for the FEGradio and other facets of FEG, you should consider investing in FEG.

FEGtoken is a part of an entire ecosystem, so you should only chase it if you’re intently interested in the opportunities it opens. Further, it appears to be aimed at the Latin American community. If that attracts you, check it out.

Is the FEG maximum price going to fall?

It’s impossible to predict. Keep an eye on how the ecosystem develops and watch for its mainstream adoption.

No. It has been steadily dropping.

How to buy FEG Token?

How do I exchange FEG tokens?

Same answer as the above.

Scam. No identity on Dev team. No photos of dev team