BitPay Wallet is a client for storing and using bitcoins for payments from one of the world's largest specialized companies that have been successfully operating for many years. The developer has an impeccable reputation with hundreds of thousands of customers around the world for offering prepaid cards, bitcoin wallets and other solutions. The first version of the cryptocurrency wallet was introduced in mid-2016 following a special partnership agreement with Intel.

The active development of the platform did not stop there. For example, in 2017, the release of Visa payment system cards began, which can be linked to a wallet with a cryptocurrency. This made it possible to use the latter to withdraw funds from ATMs or settle in any store in the world where such cards are accepted. Initially, they could only be ordered for US residents, but now the order is available for 100+ countries, including the states of the former USSR. The cost of the "plastic" is $ 9.95.

The Main Milestones of the BitPay

BitPay Wallet payment system was founded in the USA in 2011. Originally based in Orlando, Florida, it moved to Atlanta, Georgia in 2013 after receiving $ 2 million in Founders' Fund funding. It must be said that such funding was not obtained by chance. Already at that time, the company had about 10,000 clients, and the volume of trade since its opening exceeded 34 million dollars. The latter figure is quite good considering the little-known and low cost of Bitcoin at the time. 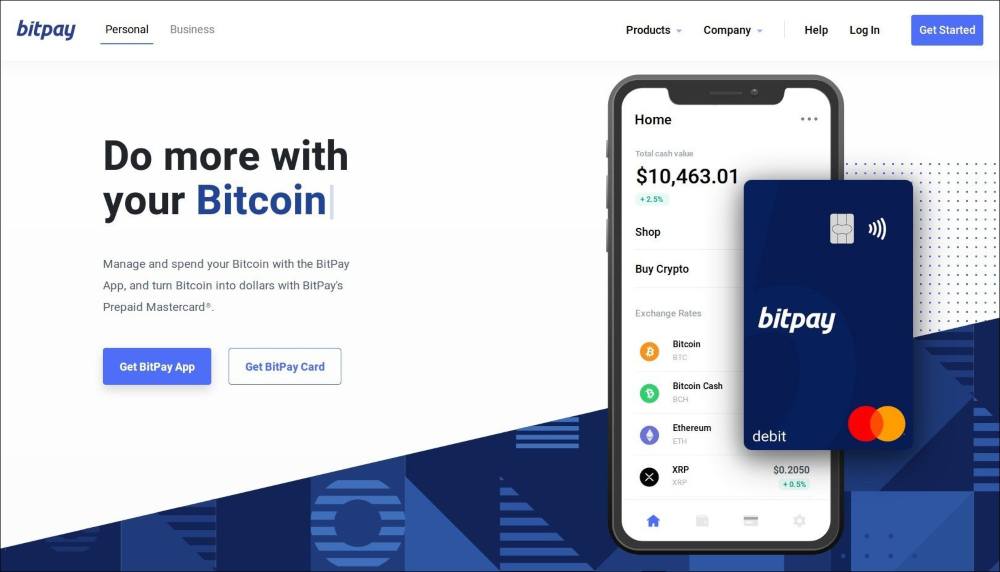 In 2014, additional offices were opened in New York, San Francisco, St. Petersburg (Florida), as well as in Argentina and the Netherlands, which was a step towards further expansion. Interestingly, in the same year, the company became the official bitcoin provider for several large casinos in Las Vegas.

In 2017, BitPay Wallet raised the minimum payment for several days to $ 100, which plummeted the number of transactions and forced it back to $ 5.

In 2018, the BitPay Wallet developer received a special license to issue virtual currency in New York from the local financial services department.

In 2020, the company announced the change of the payment system to MasterCard. At the same time, support for all previously issued prepaid Visa debit cards will end on December 31, 2020, regardless of the expiration date, which requires additional costs for card renewal. The transition to the new payment system will not affect the security for users in any way, since the cards will be equipped with an EMV module, and the possibility of making contactless payments will remain. Payment when paying with such a card will be done with the help of automatic conversion of the cryptocurrency rate into the US dollar and further translation into the calculation currency, provided that the purchase is made in a third country.

The application allows you to store and perform transactions with the most popular cryptocurrencies Bitcoin, Bitcoin Cash. By choosing BitPay Wallet, you get the following benefits: 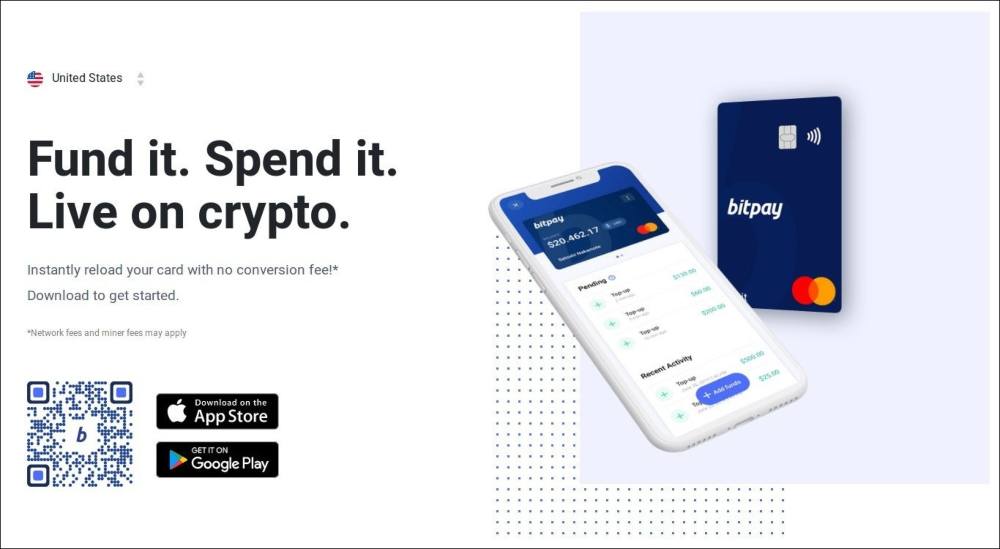 The application is available for all major operating systems, including not only Mac OS, Windows, but also Windows Phone, which is very rare today. The process of installing and configuring a cryptocurrency wallet itself:

As cryptocurrency platforms deal with money hackers are there to steal assets of careless users or looking for security vulnerabilities hoping to withdraw huge amounts of money belonging to multiple users. That's why it is extremely important for crypto companies to provide both a secure platform and protection measures that will make access to accounts hardly possible for strangers.

Let's see what BitPay can offer to secure user funds and data. BitPay doesn't store its users' private keys. Many consider it to be an important security feature as no one besides account owners can access the accounts. Storing money on BitPay is like holding them in your pocket. However, when you lose your private key and cannot access a seed phrase that could help you to recover the key, you no longer can access money. At that point, funds become no one's property. It means that non-custodial wallets are a big responsibility alongside big security.

Users can secure the accounts with a PIN, multi-signatures, touch ID, and so on. These measures create additional layers of security each of which makes it harder for the intruder to access the account. Thanks to multi-signatures, BitPay users can split their funds between several devices. More than that, the funds can be distributed between a group of people.

Basically, the wallet has a simple interface of a minimalistic plan, which is enough to perform all operations. On the main page, you will find 5 tabs in the footer: 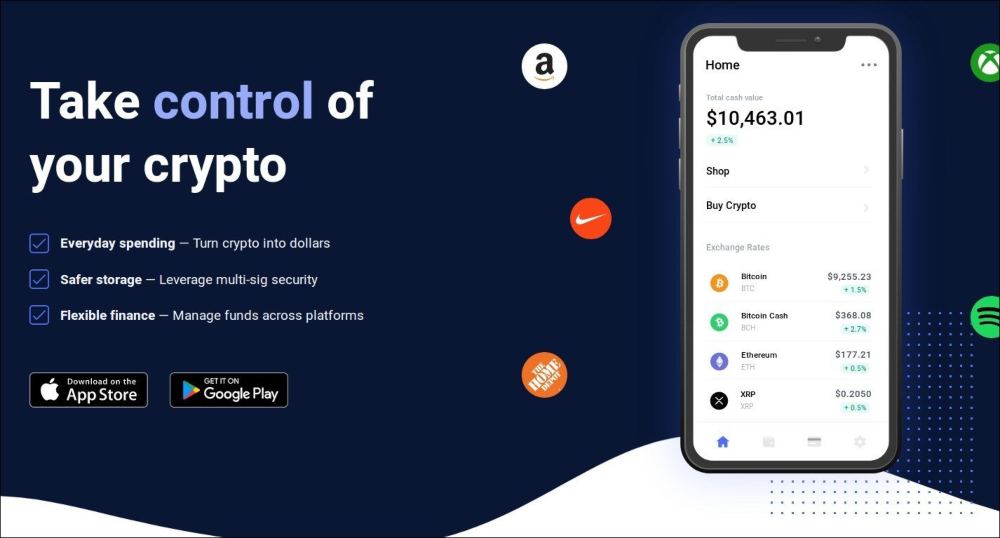 Today, the wallet may be of interest to both users and online stores, companies wishing to accept payments in cryptocurrency. There are two options available today:

For making payments in stores, the BitPay Wallet commission is 1% and is charged only from the seller, and the user of the cryptocurrency does not pay anything. As a result, today the platform is actively used by legal entities, and the total number of partners is several thousand.

Why use BitPay Wallet

Given the reliability of the developer company, long and successful work in the market, and a positive reputation, we can recommend the wallet for use due to several obvious advantages, some of which have already been mentioned in our BitPay Wallet review:

At the same time, there are a couple of shortcomings that are worth paying attention to, and it is unwise to hush them up. First of all, we are talking about a limited choice of cryptocurrency options. Of course, Bitcoin, BitcoinCash are the most common, but today altcoins also play an important role, so it would be worth expanding the number of options. At the same time, the Next Steps block can be perceived as an advertisement offering to buy gift certificates from Amazon. Completing the list of shortcomings, to put it mildly, is not the best translation into Russian. The latter is strange, because the company claims to be reliable and serious, so it could have attracted specialists - native speakers of the Russian language for high-quality translation.

Is BitPay Wallet a Scam?

Considering that the anonymity of payments in the cryptocurrency environment attracts fraudsters, it is logical that the owners want to ensure their safety and protect themselves from fraudsters. There are no particular problems in this due to a number of technical solutions at the level of the wallet itself, which requires BitPay Wallet to be verified at the first launch and before making a transaction.

If we talk about the company itself, then it is definitely trustworthy. At the very least, one cannot talk about fraud on her part, given the cooperation with banks and the MasterCard payment system, and earlier Visa, the location of an office in the United States, where strict rules of financial regulators apply. Against this background, a BitPay Wallet scam is unlikely, at least in the short or medium term.

Concluding the BitPay Wallet wallet review, it is worth pointing out that this option is suitable for "classic" cryptocurrency users who prefer not to mess with new products. The latter is quite logical, given the volume of Bitcoin turnover, as well as the greatest distribution of this particular type of crypt. At the same time, the company announced the expansion of the number of cryptocurrencies, which will increase the number of users seeking to make money through speculation and making money on altcoins.

- Support for a large number of languages;
- The simplicity of the user interface;
- Open-source code by developers;
- The ability to integrate with Trezor, Ledger wallets;
- The ability to buy cryptocurrency through an internal exchange office;
- Option to set a password for additional protection of funds;
- The ability to manage and create several wallets at once;
- Product integration for buying Amazon gift cards, connecting a Bitpay plastic card;
- Multisignature support.

- Dormancy Fee - BitPay is one of the few crypto debit card issuers to charge an inactive cardholder fee.
- Regional Availability - The BitPay Card is not available to users outside of the US.

It's got unexpectedly fast transactions. Good to see.

Simple interface and simple operations. It's a pleasure to work with them.

It seems to me it's good feature the I control my private key. At least. I know that nobody's gonna use without my permission.