What Is Lolli? And How to Earn Free Bitcoin While Shopping?

“Lolli”. This name may cause you to think of some sweet treat or even a childhood nickname someone in your class had. But if you hear the word ‘Lolli’ in a crypto context, know that Bitcoin rewards are at stake (and probably on your way too, if you choose to be a Lolli user). So what is Lolli? Lolli is an app that allows you to earn BTC rewards while you shop online. It’s a sweet deal: you’re already getting dopamine from spending that $$$ in online shopping, and now you’ll be rewarded for it - so double dopamine dosis coming your way, yayyy. 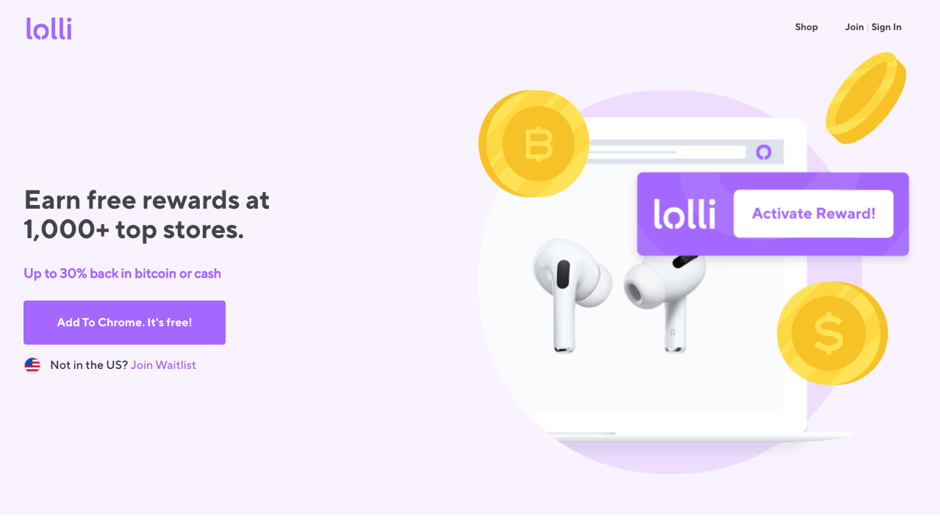 From the very beginning, this project gained traction due to its value proposal and significance in getting people to adopt crypto quicker, and it also gained significant support from big-time business ‘players’ like Serena Williams and Reddit’s CEO, Alexis Ohanian. And by support, we mean financing rounds that managed to reach the 5 million dollar mark.  Ohanian itself described Lolli business model as a unique opportunity to reach a whole new BTC users base: “As someone that’s been following and participating in the crypto industry up close, I see this as a crucial inflection point to accelerate general adoption”.

Launched in 2018, Lolli forged strategic business alliances with renowned retailers like Macy’s and Priceline. Its co-founder, Alexis Adelman, claims to believe in ‘everything about Bitcoin’, and so he took this belief to a whole new level when he decided to launch Lolli. With the important mission of making everything about BTC as easy as possible, the Bitcoin-back concept arose.

Like traditional fiat cash-back rewards, but make it crypto.

How can I earn crypto for free?

Ah, the million-dollar question (or rather the million Satoshi question?). To earn crypto for free, all you have to do is sign up on Lolli’s website to get your own account and start shopping in the participating e-commerces. There’s a bit more to it, but we’ll get there in the next paragraphs.

How to Get the Lolli App

So if you’ve come this far and decided to get the Lolli app, you’ll be pleased to know that it’s quicker to get it than to read through this piece. Yes, Lolli makes it rain that fast. Sign up and install the extension on your favorite browser (if you don’t have a favorite browser that’s ok, just the one you regularly use for online shopping). Once teh extension’s been added, the purchases you made are registered into your Lolli account and the corresponding BTC-back reward starts getting processed asap. Lolli’s official (and only) website states that it’s easy to earn the rewards, and it sure looks like it! Technology and progress at their finest.

How does Lolli work?

Maybe you’re thinking: all I have to do is sign up, install a plugin and earn free BTC? That sounds too good to be true. And we thought so too, at first. But then as we dug deeper into Lolli’s business model we came upon the source of these Bitcoin funds you get rewarded with: the adhering vendors pay a “sliding-scale percentage” for every purchase a Lolli user makes. This fee constitutes both the origin of the BTC rewards and the startup revenue as well. Adelman, being the great businessman that he is, did not disclose exactly how much revenue, but we can imagine it’s pretty high.

2) You install the plugin in your preferred browser;

3) You start getting that pre-shopping adrenaline pumping;

4) You start getting that post-shopping dopamine dosis x2;

5) The plugin registers your purchase and gives you the BTC back reward based on the amount you spent;

6) The cool vendor that decided to be a part of the BTC revolution pays a small fee;

7) Part of this fee goes to you, after being converted to BTC by Lolli.

How much bitcoin can you earn with Lolli app?

The Lolli team does not stipulate how much you get as a reward, that is up to the merchant’s criteria. But, there is some numerical data we can provide you with so you get an idea of how much there is to be gained, in average.

The average percentage reward is 7% and up to a whopping 30% could be earned.

Yes. It is a regulated start-up with big names associated, like Serena Ventures and Night Media. You know it’s legit when other legit players join in the game.

Where Can You Shop Using Lolli?

Lolli has a whopping 1000+ stores in its catalog. You can check the full list here, but we can already tell you that Adidas, Gap, Walgreens, Old Navy, and Udemy are some of them. You can use the filter provided by Lolli to sort out the type of store you’re wishing to find. 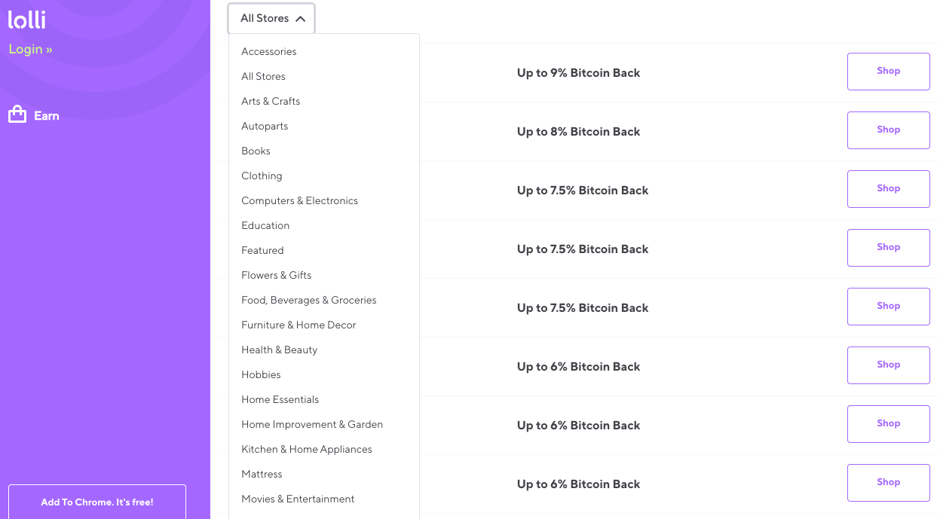 Why should you use the Lolli App?

Why not? We should all know by now that the *perfect* app or platform does not exist. Don’t let yourself believe otherwise. Of course, there are some drawbacks, the major one being the waiting time to get the refunds: 30 to 90 days. As stated before, it is up to the merchant’s will how much you get and it’s probably their call to decide how fast they are with the processing time, add it to Lolli’s own processing time in which they still have to convert it to BTC and 30 days sound like a reasonable time.

Think of it hits way, you were already going to buy from that vendor right? With no BTC back? So even if the 90-day mark is reached, sit back and relax, the rewards are being processed and it’s not like you depend on them to make ends meet (hopefully).

Adelman knew exactly what he was doing when creating Lolli, having previous experience in the retail business space. Did you know that he also launched Cosmic? Cosmic allows the users to purchase from different vendors in a single transaction and was ultimately acquired by PopSugar in 2015 and then Rakuten in 2017. Despite its sale, Adelman continued on being a major managing figure in Cosmic and that’s when he started to try and get some of the retailers on the platform to hop in the Bitcoin boat. He failed to do so in the Cosmic enterprise, but instead of giving up (why would he? This is a great idea), he went on to launch Lolli. Kind of like a ‘fine, I’ll do it myself’ vibe.

He has stated that he feels that bringing Bitcoin to more and more people and making it accessible is sort of his calling. This is where you can tell someone’s really passionate and focused on a project and won’t let it go, well, ever. Or at least until the ultimate mass adoption goal has been reached to its full potential. Adelman is both an example of perseverance and believing in an idea that you know is going to work and a classic example of inspiration coming your way after you get your hands ‘dirty’ and work in the industry and try to launch other ventures. So if you’re looking for inspiration, this is it. Start doing the work you know and like, and ideas will come flowing to you by way of identifying a solvable problem or a very useful tool that adds to people’s lives (like Lolli).

If you came all this way to find out if you should use Lolli, the answer is: yes. I mean, no one’s forcing you to, but getting crypto rewards sound like a no-brainer. As always, even if investing is not involved you should take a good look with your own eyes before hopping into new platforms, projects or rewards, so the Terms and Conditions of the platform seem like a good place to start before enrolling. 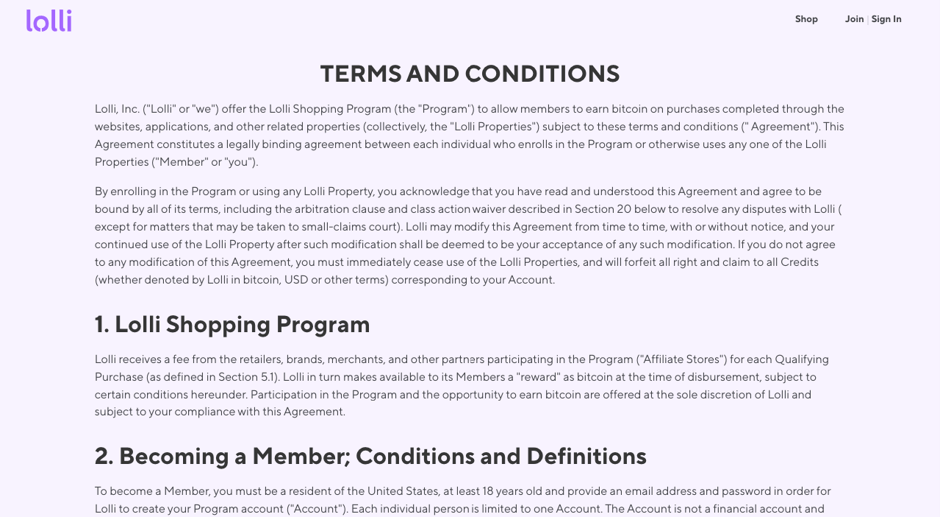 Why Lolli as a name?

Like getting a lollipop after a doctor’s visit as a reward, Lolli aims to provide you with the same feel-good feeling after using their plugin - and so ‘Lolli’ as a serious company name was born.

Do I have to set up an independent crypto wallet to get the rewards?

No. Lolli sets one up for you where you’ll be getting the crypto rewards. Just remember, even for BTC-back rewards, not your wallet, not your keys…

Can I use other tricks on my sleeve to make the most of reward programs?

If you have other plugins installed that register your online purchases and such, Lolli won’t accept these purchases into their rewards program. Make sure you know how to properly use the plugin before purchasing. There’s more detailed info here.

How do I know if I’m getting rewards and how much?

Lolli send out an e-mail with an estimated amount to be received a few days after the purchase. You can also check out your account dashboard to see the latest movements that were registered.