Elastos (ELA) is a cryptocurrency representing the blockchain-based open-source ecosystem of the same name. The main focus of Elastos is developing the decentralized version of the Internet. Blockchain technology can be used for an increase in the goods circulation on the Internet as people will be able to easily sell intellectual property using Elastos. One of the goals is making online objects kind of tangible market-wise. Elastos provides each piece of content with its unique ID. It makes it possible to literally possess each piece of information and do whatever actions we do with any material object (handing it over, buying or selling it, and so on). The possession and transactions are reflected in the Elastos ledger and can be traceable. The content trading can be handled via the Elastos cryptocurrency. The Elastos network will host dApps as well. Another goal mentioned in the whitepaper is providing people with an opportunity to access content without the intermediary of media players or other platforms. The only thing that will be necessary is the cryptocurrency. This form will make statistics clearer and the connection between the content makers and consumers more direct.

The project was launched in China by Rong Chen (previously he was a senior software engineer in Microsoft) and Sunny Feng Han. The whitepaper was issued on January 1, 2018. Currently, the company is based in Singapore. Nevertheless, it has offices in Shanghai and Beijing, too.

Elastos can be compared to Ethereum. Actually, the company compares itself to Ethereum in the whitepaper stating that Elastos is better in terms of data storing and has higher computation speed and flexibility. Elastos uses sidechains in order to make its network work faster and avoid overload. The main chain is busy executing transactions/transfers while sidechains are responsible for smart contracts processing. Moreover, all the dApps and services functionality is executed via sidechains. All the incoming data comes through the identity verifiable channel. Blockchain ID makes it possible to verify the identities of the interacting parties. 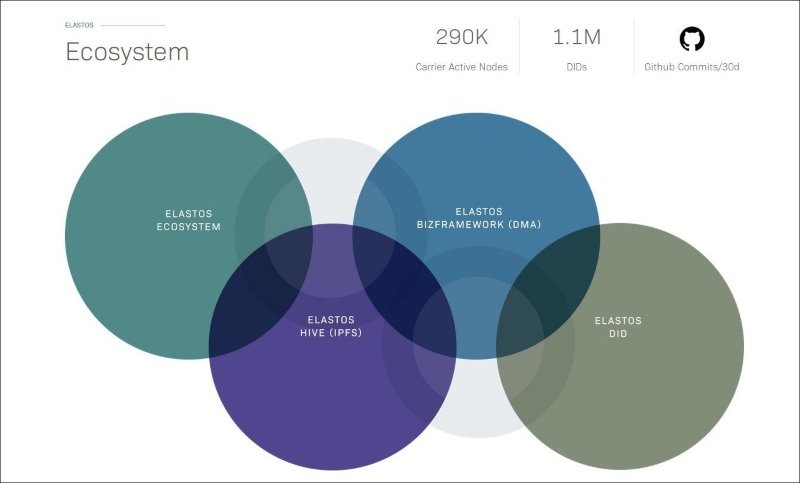 The Elastos Smart Web has four parts: Elastos blockchain which is responsible for hosting a decentralized smart web, an operating system Elastos Runtime which serves as a gate between the Internet and the Elastos apps and protects the system from the standard Internet-related threats, a peer-to-peer platform Elastos Carrier responsible for the circulation of data between the apps and virtual machines, and Elastos Software Development Kit (SDK) which is necessary for applications to access their IDs and services. Moreover, the non-Elastos apps on the user devices can be accessed via the Elastos SDK and the safety of data of these apps can be enhanced through the storage on Elastos.

Elastos opens quite wide possibilities for content creators in terms of marketing. The Elastos whitepaper brings the writers as an example. They can sell digital books and limit the circulation of the copies. Let's say the author releases only 300 copies of her/his book, each one will have its ID, so these books will be tradeable and no one will be able to copy it (at least on the Smart Web). It can be not only books, but limited editions of game apps, and other content. Each digital item can increase in value if the respective piece of content gets popular. So potentially those who bought these items can sell it for a higher price. Most people don't need to store books they have already read or games they have already played through so they can sell them very naturally. As digital items don't get worn after being in use, the price can be the same. If the content is popular the price can even get higher. The content creators can crowdfund their projects selling tokens that will bring holders a portion of the creators' profit. In general, the Elastos project is aimed at replacing the modern content market dependent on middlemen with the peer-to-peer space where people will be able to share, sell, and get information without an intermediary.

Unlike most tokens, Elastos (ELA) wasn't built on top of a third-party blockchain. Instead, it was created together with the Elastos blockchain and network. Only 35% of tokens are available for mining and the annual inflation is set to 4%. The supply of ELA tokens is limited to 33,7 million. All Elastos wallets are created by Elastos itself. No other company creates wallets that can store and receive ELA tokens.

Elastos uses the Proof-of-Work consensus algorithm. The ELA tokens are merged mined with Bitcoin. It means that miners having an ELA wallet and proper software can receive rewards in BTC and ELA simultaneously while mining ELA. Miners don't have to use extra power to mine both coins. It's literally the same as mining BTC, but with the rewards in both currencies. Such an approach helped to spread ELA tokens in the early days.

The token is listed on such big exchanges as Huobi Global, CoinEx, KuCoin, and CoinEgg. According to Coinmarketcap, ELA token ranks 138 by market capitalization. In late 2017 - early 2018 the ELA token price was unstable but it was several dozens USD. In 2018, the price had dropped prominently. In the last few years, it was below $5. Now let's try to predict the future price of the ELA token. We will begin with the review of the past price changes of Elastos in detail.

As Elastos tokens have appeared on the market when the biggest crypto-market rally has finished, their price had a different trajectory than currencies that came to the market in 2017 or earlier. The first ELA tokens became available in February 2018, when most of the currencies have already gone through their historical peaks and were in a downward trend. On the very first day, the ELA price was above $40 —a whopping price for a new token on the market. In the next several days the price was growing steadily reaching its all-time high on February 24 at the $93.96 mark. Interestingly, the BTC price had a short surge in February, crashing in March, just like the ELA price. It seems that those days the Elastos coin experienced the influence of the prime crypto coin. By the end of March, the Elastos price dropped below $30 for the first time.

As the Bitcoin price began to rise in April, the ELA price had followed and reached $52.67 at the peak by the end of the month. In May the price was very volatile, fluctuating in the $35 - $64 interval. In June the price declined again. On June 24, it dropped to slightly above $17. The price kept on declining gradually throughout the summer. By the beginning of August, it was already below $10 and in September ELA was mostly around $7. Once again, the trends were close to BTC price trends. We should bear in mind that these two have a straight (but not mutual) connection as ELA is mined together with BTC. September, October, and especially November were harsh for the BTC price. It decreased from the $7,000+ mark to $4,100. Needless to say, Elastos was going through a serious downfall, too. By the winter of 2018, it was slightly below $3. In December and January, the price was above $2. It was fading away slowly and in February Elastos tokens were traded at the nearly $2 price or a bit lower.

Once again there was a parallel to the BTC price which began to grow in the spring of 2019. The same happened to the ELA price. On March 31, it reached $4 and continued to grow the next month. In April and May, the price was oscillating in the $3.7 - $4.4 interval. In June, ELA went higher and reached $5.50 twice during the month. However, in August, the token price decreased to slightly below $3. In the fall months, the price became closer to $2 dropping below $1.5 at times. We will say it again: in general, the trends of ELA resemble trends of BTC.  In December and January, the price was around $1.5. There was a short spike in February that didn't help the price to reach even $3. On March 13, the ELA price was as low as $0.839. That day the entire crypto market experienced the most severe downfall in its history because traders were selling out everything in a panic because of the stock market cataclysms. In the spring, the price was recovering slowly. Only in the middle of the 2020 summer, it reached $2 again. For the entire summer, the price was fluctuating around $2.5 and then went down by the beginning of the fall. It was slightly above $1.6 for several weeks but later declined to a $1.4 level. The resurgence started around January 6. The price had reached $2 again and continued to go up slowly. As of January 18, 2021, the Elastos price is $2.55. The market cap is $44,271,258. The coin is close to the bottom of the list of 200 cryptocurrencies ranked by market cap. As we can see the ELA token heavily depends on the BTC price, in general, the ELA rates weren't too bright. What will happen to this token in the future?

As the traditional currencies are facing serious troubles due to the ongoing economic, social and political challenges, the cryptocurrencies will keep on strengthening this year. As the ELA price proved its aptitude to follow the BTC price, there is no doubt that the price will grow bigger. We expect that by the end of the year, the ELA price will reach around $2.9.

The experts predict that the crisis is going to be really strong so only by 2023 the traditional economy institutions and fiat money will recover. However, by 2023 the cryptocurrencies will gain some strength. As Elastos is not having any signs of the ability to grow fast, we assume that by the end of 2023, this coin will barely pass the $3 level. It's hard to say how well the Smart Web will be at that time. Probably, if the dev team succeeds, the token price will be able to get to the $4.2 mark.

If the Elastos development speed stays the same as now, the price will reach $3.5 by the end of 2025. If the project succeeds, the ELA token is capable of reaching over $6 by that time.

Ability to earn using the platform