DigiByte (DGB) is an open-source cryptocurrency launched in 2014. As of now, the coin is close to the bottom of the top 50 cryptocurrencies by market cap. DigiByte relies on the Proof-of-Work consensus mechanism hence it can be mined. The currency is deflationary and built using the Bitcoin code but unlike Bitcoin, its total supply is limited to 21 billion DGB. Another priority of DigiByte currency is the speed of transactions. Currently, the network is capable of performing over one thousand transactions per second.

DigiByte was created by Jared Tate. His goal was to develop a cryptocurrency free of the known Bitcoin's issues. He wanted a new coin to be more secure and not prone to centralization like Bitcoin. Also, Tate hoped to make DigiByte more convenient in terms of everyday use so the currency would gain a better adoption as a means of payment.

The first block was mined in January of 2014. Resembling the way the first Bitcoin block contained a headline concerning the financial crisis, the DigiByte Genesis block had a headline quote, too. However, the topic was different. The message read "Target: Data stolen from up to 110M customers." It meant that DigiByte was coined as a payment network with the enhanced security of data. 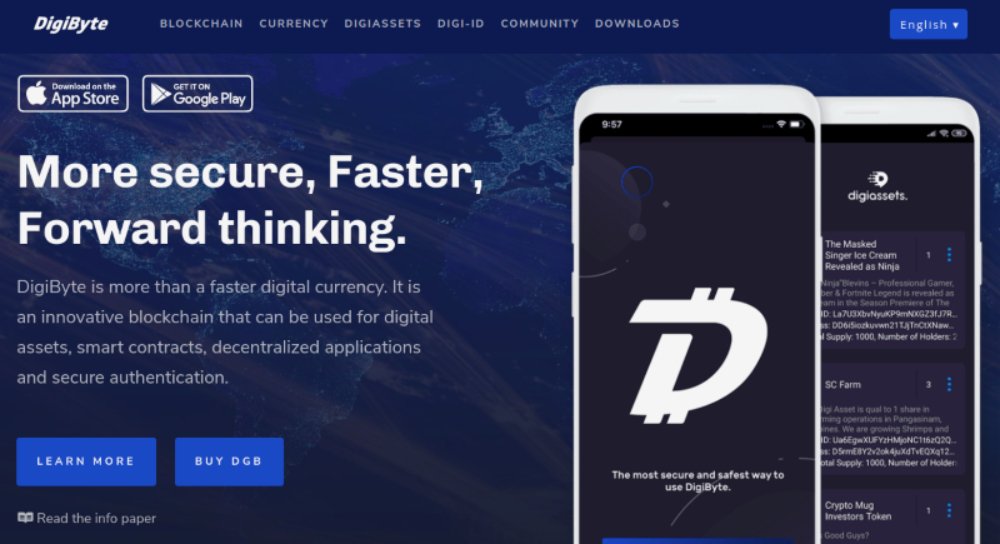 DigiByte was premined to make sure that developers and early adopters can benefit from the project. A new technology DigiShield adjusts mining difficulty. More than that, this feature protects DigiByte from mining in multi-pools. Thanks to the MultiAlgo hardfork that was activated in September 2014, DGB can be mined via several algorithms (namely Groestl, Skein, Qubit, Scrypt, Odocrypt, and SHA256). It was made to let ASIC, GPU, and CPU miners do their thing in a comfortable way using an algorithm that fits them better. Such a measure helps DigiByte to attract more miners and keeps the network decentralized.

With time DigiByte became more than just a currency. Now the DigiByte network can be used for the execution of the smart contracts,  building decentralized apps, and for other purposes.

In order to improve the privacy of DigiByte users, the platform provides a Dandelion++ technology. It helps to conceal the user IP address. The solution was implemented in 2019.

The new coins can be created on top of the DigiByte blockchain via the DigiAssets feature. Besides crypto coins, DigiAssets can represent other entities, for instance, physical objects, art pieces, estate items, and so on. Additionally, DigiAssets can be used to power the documentation. There are already a number of projects built on top of DigiAssets. In order to launch a project on this platform one needs to learn a DigiAssets protocol on GitHub, issue an asset or use one of the standard tools (this feature can be used by people who cannot develop the assets on their own). The DigiByte Developers group provides assistance to people wishing to create custom assets. The assets created on this platform can be distributed and traded on the digi-broker.com website.

DigiByte has an ID-maintenance feature called Digi-ID. It helps users to quickly enter their accounts in applications and on websites all over the web. The credentials are safely stored on the blockchain. Those using Digi-ID don't need to enter username and password anymore. 2fa is not needed, too. Instead of credentials, users access their accounts via the face identification, via fingerprints, or through inserting the PIN. Everything is executed through the use of a couple of keys (private and public) on the blockchain. All the user-related data is not stored by DigiByte so the personal information cannot be compromised. What makes Digi-ID especially good is that it's absolutely free and doesn't even charge any fees for its use. Digi-ID can be used for Coinomi and Ownbit wallets and auth app AntumID.

Another service powered by the DigiByte blockchain is DiguSign. It is a smart contract platform providing an opportunity to store and make actions with documentation. The security is maintained via decentralization. DiguSign relies on the SHA256 protocol. The service is used in healthcare, management, trade, insurance, and other spheres.

To get the coin available for more people, developers created a DigiHash mining pool. The pool supports numerous hashing functions that can be used to mine DGB. It is not the only pool where people can mine DigiByte.

DigiByte is compatible with Atomic, Exodus, Coinomi, Edge, Jaxx, Arba, and other software wallets. Those who prefer hard wallets can opt to store DGB on Ledger, Trezor, KeepKey, etc.

More than that, DigiByte is compatible with several debit card brands supporting cryptocurrency. DGB can be stored on the cards made by PolisPay, Uphold, Spend, and Swipe.

A number of point of sale apps are supporting DigiByte, too. Currently, there are four of them: DigiCafe, PlusBit, Paybyte, and CoinPayments.

As you can see, the DigiByte team took care of making its product as available as possible. We will mention two more projects related to DigiByte adoption. They are DigiPSN and Mine That Digi. DigiPSN is a Playstation market accepting payments in DGB. Mine That Digi is a gaming service where users can play Minecraft receiving rewards in DGB.

The coin is available on several exchanges including such big platforms as Binance, OKEx, KuCoin, and Bittrex.

To date, there are three DigiByte applications. They are DigiByte Core, DigiByte Mobile, and DigiByte Go. The first of them is the most stable. Moreover, it supports SegWit and is capable of full validation. DigiByte Core is the only version that is available for Apple devices. DigiByte Mobile provides access to an SVP wallet and allows using DigiAssets and Digi-ID. DigiByte Go version is not available as of the moment of writing this article (September 2020). According to the website, this version supports multi-signature, DigiAssets, and a cloud wallet.

When DGB first appeared on the market in February 2014, its price was only $0.0014. Quickly, the price dropped and until September it was mostly around $0.0002. In September, the price reached roughly $0.00009, and continued to decline in the following months. By February 2015 the price regained the value it had one year ago. The fluctuations were negligible until the summer when the price suddenly  dropped to around $0.00009 and continued to meltdown. In the middle of September of 2015, DGB price was around $0.00005. At that point, it started to rise. It peaked at $0.00048 in October, however, the price declined then. For several months it was between  $0.0001 and $0.0002. There was a spile in late March, when DGB reached $0.0006 for several days, but then it dropped to around $0.0004 and then gradually to $0.0003. Then, the price began to fluctuate slightly above this value for months. Interestingly, not all the spikes and dropes of DigiByte were coinciding the Bitcoin price's moves. In November, the price fell below $0.0003. Only in March of 2017, it shortly surged to over $0.0003 again. On April 7, DGB peaked at $0.0011. In May, it was $0.01 and reached $0.02 by June. However, by the end of the summer, the price dropped below and was quite unstable. By the end of November it reached $0.01 again and finally started to grow steadily.

In December and in early January the price was growing up. On January 7, 2018, DigiByte peaked at $0.14. It was the all-time high in DigiByte history. One week later, the price dropped below $0.1. By April, the price was already five times lower. Throughout 2018, the DGB price was fluctuating between $0.02 and $0.04. In November, the price started to decline quickly. It lowered from $0.02 to $0.014 and continued to decrease in December. By January 2019, DigiByte was trading at around $0.009. In the spring the price got higher and reached $0.014. In the following months, the price was volatile ranging between $0.009 and $0.015. In September, the price moved below $0.008. In early 2020, the price was close to $0.005. Following the overall crypto market trend, in February, DigiByte had a short rally reaching $0.0085 at the peak. On March 12, there was the biggest downfall in the history of the cryptocurrency market. That day the DigiByte price reached $0.003. While the traditional financial system was going through a troubled period, cryptocurrencies were on the rise. In April, DGB hit $0.015 and then $0.02, in May. The price has been growing gradually throughout the summer reaching $0.033 in late August. The last days of August saw the decline. For the rest of the fall and in January 2021, the price has been moving from 2 to 3 cents and back. At the moment of writing this article (January 19, 2021) the price is $0.026. The DigiByte's market cap ranks 72nd at $384,466,285.

It is fair to say that DGB didn't grow so well in comparison to other significant cryptocurrencies. However, it doesn't mean that the best days of DigiByte have gone. There are at least a couple of reasons why we believe that its price will go up. First, DGB is in the top 100 (it means that this coin is better than thousands of other cryptocurrencies), second, DigiByte represents the platform with numerous use cases and a dedicated community.

As the cryptocurrencies will benefit from the global post-covid crisis, we expect that DigiByte will join this wave and grow bigger. By the end of 2021, the price will reach up to $0.04. As the economic troubles will last for about a year or more, the cryptocurrencies will keep on rising. Such a supportive environment is going to fuel DigiByte's adoption and price. By the end of 2022, DGB will cost $0.06 at worst. As the world economy will probably recover by 2023, the user base of cryptocurrencies might decline a little, so the cryptocurrency revolution will get a bit slower. It is hard to tell which price may be reached in 2025. DGB will keep on growing but we believe it won't cross the $0.1 mark by the end of the year as the coin will have to compete with dozens of more popular coins.

Many algorithms for mining available

Nice coin to invest in!