Will Cryptocurrencies Replace Fiat Money? Not the Perennial Question Anymore 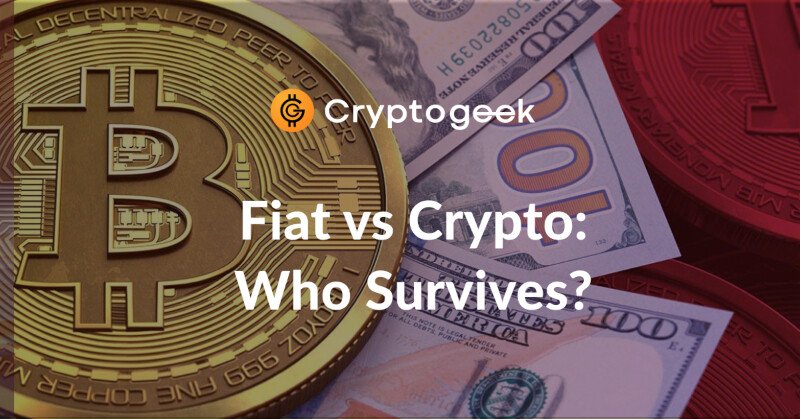 There's the thing. This question is not the same for residents of different countries. In countries with good or at least bearable economic conditions, this question sounds philosophical. Cryptocurrency and blockchain is a playground for enthusiasts, a new niche for corporations and start-uppers, and an interesting theme for researchers. In such countries, people might think of cryptocurrencies as a more or less interesting thing whose value is rather theoretical. But in countries with a chronically unwell economy, cryptocurrencies are the inherent part of life. People use cryptocurrencies because they have no good choice. Their national currencies suffer from hyper-inflation so using more stable crypto coins appears to be a better solution for maintaining personal finance.

So, will cryptocurrencies replace fiat money one day? While Europe and America are trying to find the answer to a perennial question, Southern African countries turned out to be more progressive — it was a matter of survival. They didn't ask that question, but the answer is in their everyday life.

To date, many countries have not even decided how to approach cryptocurrencies in terms of the law: should crypto coins be treated as securities, goods, or rather currencies? It doesn't seem probable that all of a sudden there will be a single global consensus concerning cryptocurrencies. However, authorities of all countries will have to deal with the ever-growing interest of the public to this new technology that makes cross-border transactions fast and cheap and provides the opportunity of staying private.

One of the largest bank aggregations in the world, Deutsche Bank, reported that cryptocurrencies are going to replace fiat money by 2030 globally.

A serious obstacle mentioned in the report is the heterogeneity of electricity costs in different countries. It creates a disproportion in conditions in which cryptocurrencies are mined. It's worth saying that mining or Proof-of-Work in the way we know it, is not so popular as it used to be and many cryptocurrencies rely on algorithms that don't require mining. However, many of the cryptocurrency leaders including Bitcoin are still based on Proof-of-Work so we can't ignore the issues associated with electricity costs and energy overconsumption. It worsens the problem with the legalization of cryptocurrencies.

Despite all these severities, many huge companies are already implementing blockchain solutions in their work (IBM, Starbucks, Microsoft, VISA, Facebook, Amazon, and lots of others). Elon Musk, Jack Dorsey, and Bill Gates are only a few cryptocurrency advocates with excellent skills both in business and technologies. Moreover, the fact that Scandinavian countries are already working on the total removal of physical money can be viewed as another good factor for future cryptocurrency adoption. The EU Central Bank representatives were naming 2021 as the year when the entire region will stop using cash. However, it's not clear if it's official or just a probability.

So, the report by Deutsche Bank is a great example of how wealthy countries tend to talk about cryptocurrencies. They see cryptocurrency as a great idea (at best), as some potential. Of course, there are many conservative people who don't get cryptocurrencies seriously. That's OK 'cause these people were raised with banks around, with wealthy people somewhere near, and so on. The mental habits can be hard to break. Even reality can't do that, at times. By the way, what about reality?

First off, we should realize that the cryptocurrency infrastructure is still in the early stages of their development. It makes the adoption way harder, especially in countries with high rates of poverty. People need smartphones, stable Internet, and crypto exchanges accepting deposits in local fiat currencies. Without all these, cryptocurrencies have little to no chance of becoming a thing in the local community. Some of the decentralized finance platforms don't require KYC procedures which makes the usage of these platforms even more democratic. On the other hand, the lack of KYC may be seen as not secure. Nevertheless, we see that in these countries people rather benefit from DeFi systems. Unfortunately, scammers are also there to get their piece of the pie. Currently, it's not clear which fate awaits KYC-free platforms.

Cryptocurrencies are a safe haven in the countries suffering from hyperinflation. Yes, we normally perceive cryptocurrencies as volatile. But national currencies in many countries are much more volatile than, let's say, Bitcoin. In such countries, larger or smaller communities already use cryptocurrencies to preserve the value of their funds. Moreover, as these people usually cannot use banks (a typical problem in many African countries), they use cryptocurrency platforms instead. This solution turned out to be a great opportunity in countries with troubled economies. The use of crypto coins in such countries as Venezuela, Argentina, Brazil, Turkey, and a row of under-Saharian countries including South Africa is on the rise now. These days, Decentralized Finance (a sector of the cryptocurrency-enhanced economy) or DeFi became a hot topic and the mentioned countries became a touchstone showing the rest of the world what to expect.

Onfo, a blockchain project allowing earning crypto for social mining, conducted an experiment in April 2020. The experiment was aimed at analyzing the specs of how cryptocurrencies are used in developed and developing countries. There were four countries participating in the experiment: Russia and Indonesia were representing developing countries while the US and Germany were representing developed countries. Onfo sent cryptocurrencies to 100 individuals from each country to see what they will do. The condition was clear: each participant gets 10 coins and can get more coins as a reward for convincing more people to try using this cryptocurrency.

The result of the experiment was quite vivid: the spread of cryptocurrency in Indonesia was happening four times faster than in the USA and Germany. In the case of Russia, the correlation was a bit different: the coins were spreading two times faster than in the US and Germany. In general, it is quite clear that people in developing countries see cryptocurrencies as a real-life opportunity while for residents of wealthier countries, cryptocurrencies are rather a fun thing.

80% of the Indonesian population has no banking accounts but most people there do have smartphones. People in Indonesia (and other developing countries) value small amounts of money and are ready to do some job to get a small reward, while people in Germany or the USA are mostly attracted by bigger rewards. These factors make Indonesia (and countries with similar conditions) fertile ground for cryptocurrency adoption. As it was shown in the previous chapter, it is already happening in several countries.

Considering the fact that even the developed countries' economy is facing numerous challenges, cryptocurrencies will knock on people's doors there, too. It's just a question of time.

cryptocurrency exchange bitcoin cryptocurrency btc cryptocurrencies fiat money adoption cryptocurrency market defi
The opinions and assessments expressed in the text are the views of the author of the article and may not represent the position of Cryptogeek. Do not forget that investing in cryptocurrencies and trading on the exchange is associated with risk. Before making decisions, be sure to do your own research on the market and the products you are interested in.