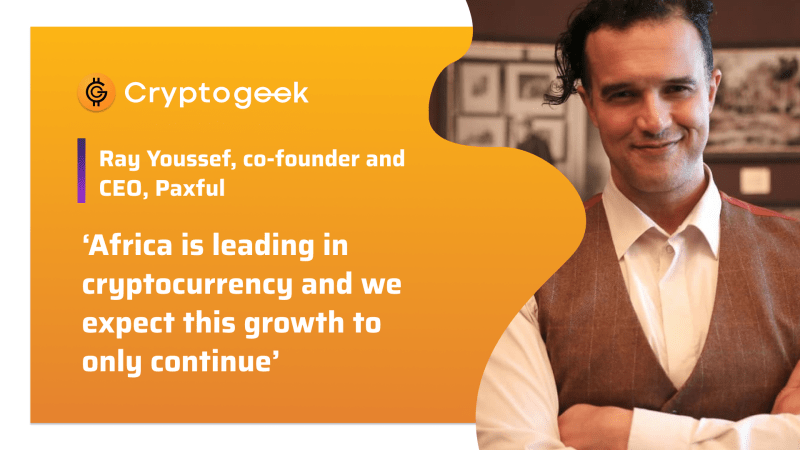 First of all, tell us about your recent integration with the Lightning Network. In a nutshell, for our readers, what was it for and what will it change for users?
We integrated the Lightning Network onto the Paxful platform earlier this year. Built on top of the Bitcoin (BTC) blockchain, Lightning allows our 7M users to transfer BTC in a matter of seconds and with much lower fees.

It’s integrated with the Paxful Wallet, allowing the Lightning experience to be essentially the same as it is now—only faster and cheaper, allowing you to trade and pay for goods and services at even faster rates.

Do you think such updates can really extend the life of bitcoin as the main cryptocurrency? Technologies are becoming obsolete, there is an opinion that over the years bitcoin may give way to other coins due to its old technology, which is already more than 12 years old.
Bitcoin is still the future of finance and you have to commend the Bitcoin maximalists for bringing the industry to where it is today. However, altcoins have a major utilization that the industry is starting to realize. Looking at Altcoins overall, more adventurous investors can use Altcoins that have backing by large players and are pushing out innovative product releases, such as Solana and ADA. It's also worth calling out the market importance of Altcoins such as Tether (USDT). Tether is massively beneficial to the market as it is a way to protect consumers from market fluctuations, currency devaluation, and it provides access to international cryptocurrency platforms with the potential to increase investments in the global market.

Try now!
Win Mistery Boxes Up To $500 Each On Binance
Try now!

What other areas / markets do you see as promising, and where else can we expect new Paxful products to appear?
Paxful’s mission is to advance a truly global economy by building a financial system that serves the 100%, not just the 1%. No country is exempt from financial problems and Paxful is dedicated to serving users in every market. While our largest market is in Nigeria, we also see massive crypto adoption happening in countries such as India, Vietnam, El Salvador, Colombia, Kenya, and more.

In a recent interview, you (Ray Youssef, the CEO and Co-Founder) said about the financial system that “it is broken for so long and globally, people are sick of the financial system that doesn’t work.” Could you explain in more detail what you mean? What specific disadvantages do you see in the traditional financial system?
Traditional legacy systems only work for the world’s wealthiest people. Take Nigeria for example -- a country where consumers face instability around the Naira, stringent capital controls on outflows, high transaction costs on financial services (e.g. on international transfers), and a minimum of $100 for card payments on international websites. It’s so hard to move money between countries in Africa that it’s easier to take a suitcase full of money and fly it from one country to the next. If you’re trying to remit money abroad, run a business, or save for the future - it’s nearly impossible to succeed with the current financial system. Technology is disrupting this model through cryptocurrency and we all need to get onboard. Bitcoin and other cryptocurrencies offer a quicker, cheaper, and more efficient way to transact money and they also give developing countries a way to enter the global economy. This will have a resounding impact and once consumers understand the opportunities, more wealth will be created.

Also in recent interviews you said that Africa is leading in terms of bitcoin adoption. In your opinion, what are the reasons for this? And will this persist over time?
Africa is leading in cryptocurrency and we expect this growth to only continue. There are several factors that contribute to crypto’s mass adoption in Africa -- the biggest being the intense drive and business aptitude of the African youth. Entrepreneurship is baked into their DNA and their hustle is leading the whole continent into a financial golden age. Additionally, given the instability and volatility in the global financial markets and political pressures of some African countries, cryptocurrencies provide a strong digital alternative to fiat currencies and allow entrepreneurs and businesses to process transactions without any interruptions. The African continent can only benefit from having access to a global currency such as Bitcoin that can help boost economies and create jobs.

What other countries do you think have great potential in terms of bitcoin and cryptocurrency adoption in the future? Which countries should investors pay attention to?
Nigeria is Paxful’s largest market, nearing 2M users and nearly $2 billion volume to date. Aside from Nigeria and other African countries, we see great potential in countries like El Salvador, which has made Bitcoin a legal tender. I have visited the country myself and have witnessed firsthand the drive of the people to ramp up Bitcoin integration. The industry still has a ways to go, but Paxful has been pleasantly surprised to see small towns retailers already accepting Bitcoin. This is because Salvadorans received the $30 incentive from the Government to use Chivo, so Merchants adapted quickly to accept the new financial stream. In small towns like Santa Ana for example, we have seen vendors using the personal Chivo Wallet, and making promotions around Bitcoin to attract customers.

Other than El Salvador, there’s a long list of countries where we see potential -- from India, Vietnam, and Pakistan, to Colombia, Argentina, and Brazil. The Bitcoin revolution has truly taken hold and cannot be stopped now that it has the will of the people.

What are your plans and priorities for the next couple of years?
Through Paxful, we continue to change the face of personal finance by using the power of P2P transactions. Utility is the future of cryptocurrency and as people begin to understand the use cases of Bitcoin, its mainstream adoption becomes vast and apparent.

bitcoin cryptocurrency crypto finance future paxful interview
The opinions and assessments expressed in the text are the views of the author of the article and may not represent the position of Cryptogeek. Do not forget that investing in cryptocurrencies and trading on the exchange is associated with risk. Before making decisions, be sure to do your own research on the market and the products you are interested in.