Will Banks Create Their Own Cryptocurrency? 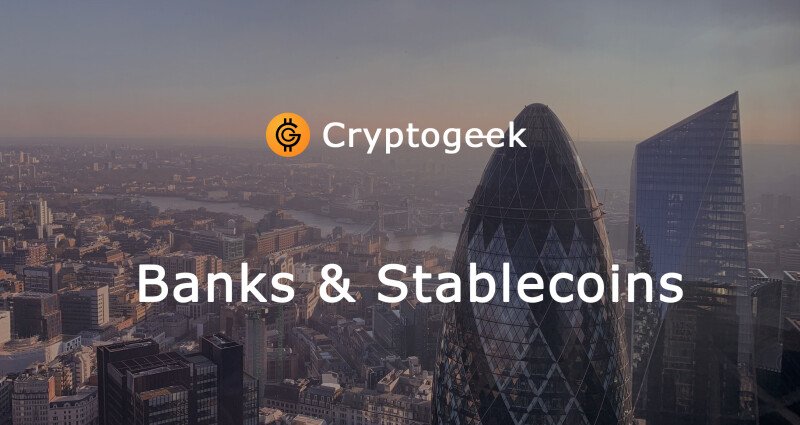 Centralized banks have realized the power of cryptocurrencies, and many are taking proactive steps towards developing privately operated digital currency. The creation of Bitcoin demonstrated that by building digital currencies with blockchain technology, secure transactions and unforgeable digital currencies are a reality.

Many banks, hedge funds, and pension plans now include cryptocurrencies in their investment pools. But more than this, multiple centralized financial institutions and governments have launched digital currencies, most often referred to as stablecoins.

Stablecoins use the same technology as Bitcoin and the like but are privately run and backed by real-world assets, such as fiat currency, gold and precious metals, and real estate.

One of the major differences between cryptocurrencies like Bitcoins, and stablecoins such as the JPM Coin, is centralized v. decentralized. That is, Bitcoin runs based on a simple but strong code, which is run by millions of computers around the world. Transactions are collectively approved and confirmed, and then added to the immutable Bitcoin blockchain ledger. This is a public ledger where every single Bitcoin transaction is recorded.

Banks are using the same blockchain technology. However, these blockchains are permissioned and private. Therefore, the blockchains of centralized banks operate in a managed ecosystem, where the organization privately transacts with the stablecoin.

In essence, stablecoins represent other assets apart from the coin itself. As such, stablecoins are examples of harnessing the technology of cryptocurrencies but are much more like traditional assets.

The JPM Coin was one of the first major investment groups to embrace cryptocurrency’s technology. The JPM is a digital coin that is used to settle accounts the same day. Typically, moving money from one hand to another can take days or weeks, especially when you are dealing with large sums.

The real benefit of the technology is the efficiency of payments. The JPM coin is a remittance coin that represents $1 USD. Holders of the coin then redeem it for dollars. All of this is run on a private, permissioned Ethereum blockchain.

Currently, there are many stablecoins in use, including Tether, True USD, Paxos Standard. Even a major Bitcoin exchange will have stable coins such as Coinbase’s coin, the USD Coin, and the Binance USD, where each coin is representative of 1 USD. These are all commodity-backed, primarily by fiat currencies. These coins function primarily for payment remittance, to be exchanged for dollars or Yen, for example.

Other projects include Japan’s Mizuho Bank, which started in 2019. Their coin, J-Coin Pay is linked to the yen. Similarly, the People’s Bank of China has been testing and developing the digital yuan for several years now and has invested heavily in blockchain research.

England and Italy have reportedly begun research and development of blockchain-based banking as well.

Banks that have created cryptocurrencies so far have created stablecoins that strictly harness the technology but not the ethos of cryptocurrency. That is to say, that one of the central reasons that inspired the creation of Bitcoin was a pseudonymous, purely digital, non-fiat currency. Applying the cryptocurrency’s technology to stablecoins does not embrace the original ethos of a decentralized financial world. As such, stablecoins are highly regulated, just like traditional commodities. It also means that they have slower growth because they are the same assets that are tied to the success (or failure) of real-world projects.

When banks create cryptocurrencies, they often use stablecoins, which are built on private, permissioned blockchains, and backed by real-world assets and currencies. The benefit is the application of cryptocurrencies revolutionary technology, which increases the speed of all transactions and eliminates borders. It also increases transparency by tracking and recording all transactions on the publicly available blockchain ledgers.

blockchain stablecoins cryptocurrencies banks
The opinions and assessments expressed in the text are the views of the author of the article and may not represent the position of Cryptogeek. Do not forget that investing in cryptocurrencies and trading on the exchange is associated with risk. Before making decisions, be sure to do your own research on the market and the products you are interested in.