ERGO is a blockchain created for decentralized finance applications (DeFi).

This is achieved by getting inspiration (and lines of code) from other protocols – Bitcoin and Ethereum. The chain uses Bitcoin's PoW to ensure network safety and create smart contracts like in the Ethereum chain, all in DeFi’s name.

Ergo uses a mining protocol that is a modified version of Bitcoin. Autolykos (a security protocol based in PoW) is highly resistant to expanded mining pools, or groups, and ASIC miners as well, which makes it a ‘green’ alternative to those who seek more energetic efficiency.  To help fight the bad environmental reputation and consequences crypto mining has, Ergo limits the size of the mining activity for each node, stepping away from the king of cryptos’ way of working.

Ergo’s native token is ERG. This project's ICO was very different from most ICOs. The team aimed at a ‘fair’ launch, and so no actual ICO occurred. Ergo’s team decided to make the tokens available through secondary markets and peer-to-peer trades. The rewards for the miners were distributed in blocks. For each mined block, 75 ERG were rewarded (from 2019 to 2021). After 2021, ERG rewards continuously drop until they reach 0 about 8 years after being launched (2027) – this limits the total  circulating supply to 97 million ERG. After the rewards are no longer tangible, since they’re 0, miners will be rewarded by receiving a share of transaction fees and storage fees.

The vision of Ergo Developers

Ergo’s developers aim to provide a different User Interface (UI) and User Experience (UX), by developing ErgoScript, a technological infrastructure on their platform, which is a software solution for developing and deploying smart contracts in Ergo’s blockchain.

The really extended, cool explanation of Ergo’s light clients and side chains can be found here. But we’ll break the light clients down for you in small-size bites so you can get a head start.

Light clients mean the same as SPV. SPV stands for Single Payment Verification, which is kind of a big deal in getting crypto to the masses and the coveted mass adoption momentum. SPV simplifies and takes away the hassle of a somewhat complicated process of running a full node*. Most people at home, even crypto adopters, don’t have all the tools and knowledge necessary to do that.

So light clients come to our rescue and provide and verify the supply of a limited data amount (node), taking the weight off the user of having to provide specific storage space and processor potency.

*To run a node you need a lot of electrical power, more than 100GB for storage, and a high computing processor. The storage space serves the purpose of storing an entire blockchain.

As mentioned before, the main objective of Ergo developers’ team is to create financial contracts safely and efficiently. That way, practically anyone can easily make these contracts on a decentralized platform without asking for proof of trustworthiness from other(s) intervenient(s).

All of this sounds great and looks great on paper, but how does that affect the crypto community? Well, no matter how big a blockchain is, an amateur person can join it anytime from his smartphone, by accessing Ergo’s network and getting the same security guarantees of a whole node.

Will Ergo’s protocol make some waves in the Cardano ecosystem, as it is being said in the crypto community?

Ergo’s PoW is 100% compatible with the Cardano protocol and ecosystem, giving a helping hand to every Cardano developer out there. The more interoperability and scalability options, the better.

Even though PoS is a very secure protocol, some smart contracts could require some safety features from the PoW consensus so they can get executed, which creates a non-desirable dependent ‘relationship’.

The bigger a DApp is, the bigger the stake has to be, which is something that hasn’t been fully tackled in PoS, resulting in a major weak spot especially if your blockchain or protocol aims to do some interoperable and collateralized DeFi.

Ergo provides the blockchain users with PoW’s proven security so that more complex DApp features are implemented on the UTxO model.

Ergo’s developers' team is working on an interoperable protocol that is not based on PoW by its complexity and difficulty in deploying a multichain network amongst different protocols and blockchains.

Ergo’s cryptography is very advanced, executing sigma protocols where the cryptographic signatures can be repaired if needed. The DApps that are being designed to work on Ergo’s chain vary from auction houses, crowdfunding websites, NFTs, a DEX, and even a ‘mini’ DAO that controls a certain amount of funds and, thanks to the sigma protocols, the qualified users may exert their vote and still maintain their privacy, not giving up their ID.

Ergo also has a local trading system implemented with a new stablecoin named ageUDS, the first one based on UTxO.

The stablecoin feeds a so-called ‘Liquidity Machine’. This ‘machine’ consists of a group of apps created on Ergo’s blockchain that bring in revenue from transaction fees.

With these complementary functionalities in the PoW protocol, and sigma implementations, Ergo definitely represents a competitive advantage for Cardano and its ecosystem, giving developers a complete set of tools for building their DApps. 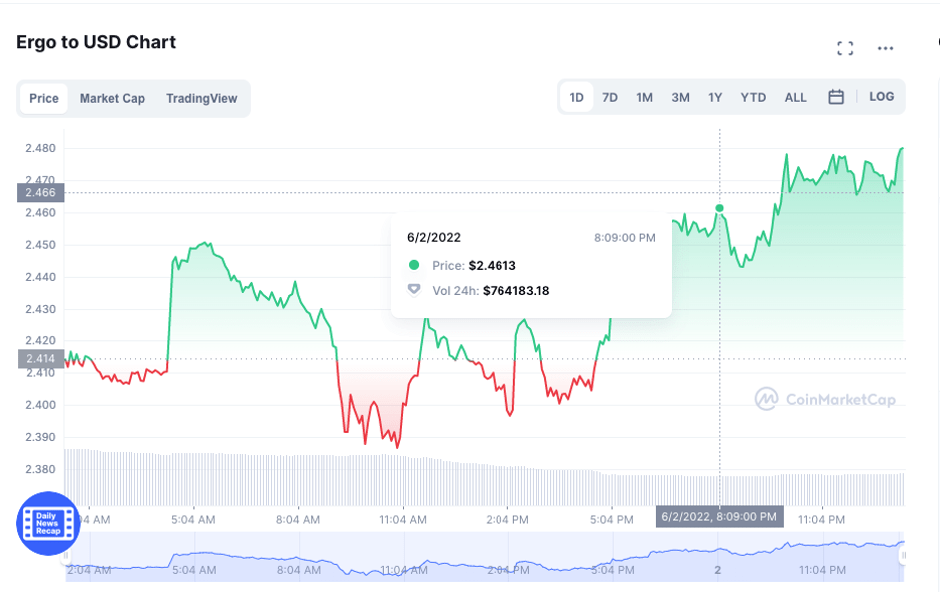 Where and How to Buy Ergo

And now you may be wondering: where can I buy ERG?

Luckily for those who seek to get a piece of the Ergo pie, purchasing some Ergo crypto tokens and adding them to the crypto wallet is not that hard. ERG is available in quite a few popular, accessible, and, most importantly, safe platforms (remember that ‘safe’ in crypto means volatility and phishing attacks as well so DYOR always): Gate.io, Kucoin, and Hotbit are some of the exchanges where you can find some ERG.

How can you buy Ergo crypto?

To be able to get some ERG crypto, sign-up for one of the exchanges (if you haven’t already), complete the KYC process, and deposit either FIAT from your bank account or an accepted stablecoin by the exchange and make the trade. If you’re not into KYC, ERG is also available in some DEXs.

If you want to know where else you can purchase ERG click here. 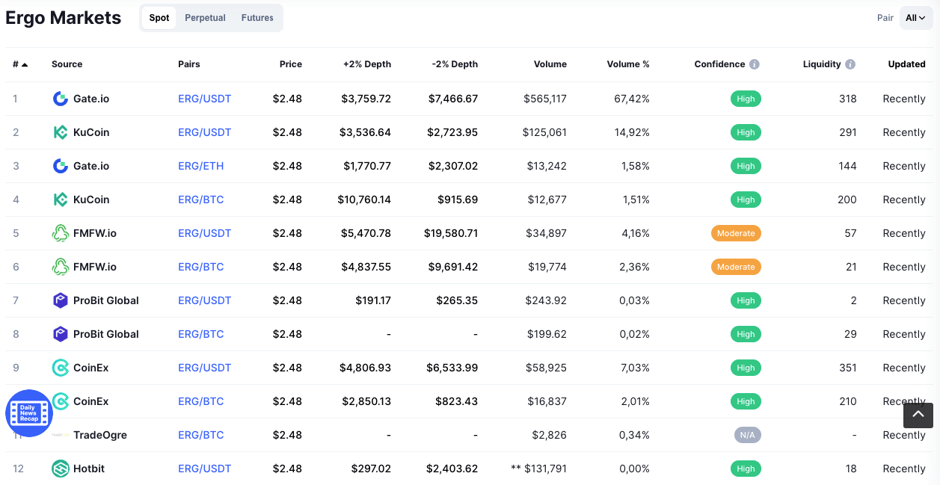 If you get your ERG through an online exchange, you may keep your tokens right there on the online exchange wallet or pass them down to your own hardware wallet. The same applies if you get it from a DEX, the tokens will be stored at the wallet address you provide at the time of the transaction, which can then be sent to a hardware wallet if desired.

Ergo’s ecosystem provides a varied wallet catalog on their own website which is, to say the least, pretty cool because they also provide guidelines and main features to help you make your pick. They filter the features by the name of the wallet, type, ledger, dApp connector, and whether ErgoPay is available with it or not.

The good news is that Ergo’s team has made it possible for miners to be able to mine ERG with low-end GPU power and low temperatures if you compare it to other algorithms (Ergo’s is written in Scala).

A full-on guide for those interested in mining ERG can be found here. Ergo’s community provides a handbook, Telegram, Reddit, and Discord communities, and even a blog full of resources for both mining pools and miners (hardware).

Why did Ergo go the Fintech way, if there’s already so much offer?

For Ergo’s creator, the creation of financial smart contracts on the blockchain was never just about how well it functioned, but how safe, accessible, and approachable it could be.

Does the team have any experience with crypto and finance?

Yes. The #HallOfFame on their website helps to clear out any doubts, but we can already tell you that crypto e-cash, compiler theory, and cryptography run through their veins.

Are there any other places to learn about Ergo besides the website?

Absolutely. For a community chat click here, for official documentation, click here, and for learning and getting to become a true Ergonaut, check this out.

What does Ergo mean?

Ergo = for that reason, because of that, hence. Ergo’s protocol is the reason DeFi and crypto are reaching users that couldn’t be reached before. 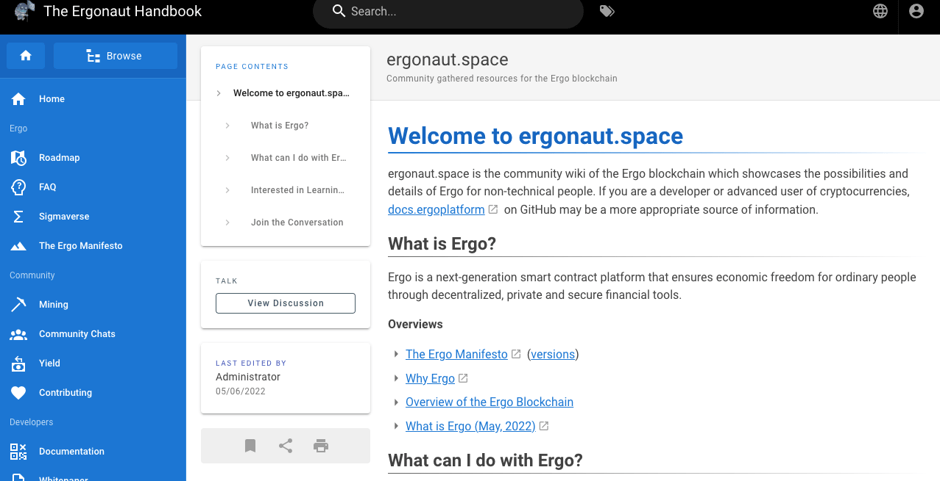 Future coin for mining after Ethereum goes to POS.