Dogecoin is one of the most popular cryptocurrencies in the world. Initially, it was created as a joke but in a couple of months, the altcoin has gained a market cap of $60 million. The coin is easy to mine and has no limit of supply, so there are billions of Dogecoins circulating in the world. Nowadays, this altcoin is frequently used for tipping for interesting content on the Internet.

The coin was developed by the Portland programmer Billy Markus in 2013. An Adobe Systems employee  Jackson Palmer was helping Markus to embody his vision of a fun cryptocurrency that would not be raising associations with the criminal reputation of the cryptocurrency world.

The developers created a website that utilizes the comic sans font and a Shiba Inu dog image — both elements of the popular Doge meme. The initial coin created by Markus was a lot like Luckycoin, a Litecoin-based cryptocurrency but later it came through some upgrades. All these coins use a Scrypt technology that made these coins easy to mine in the early years. 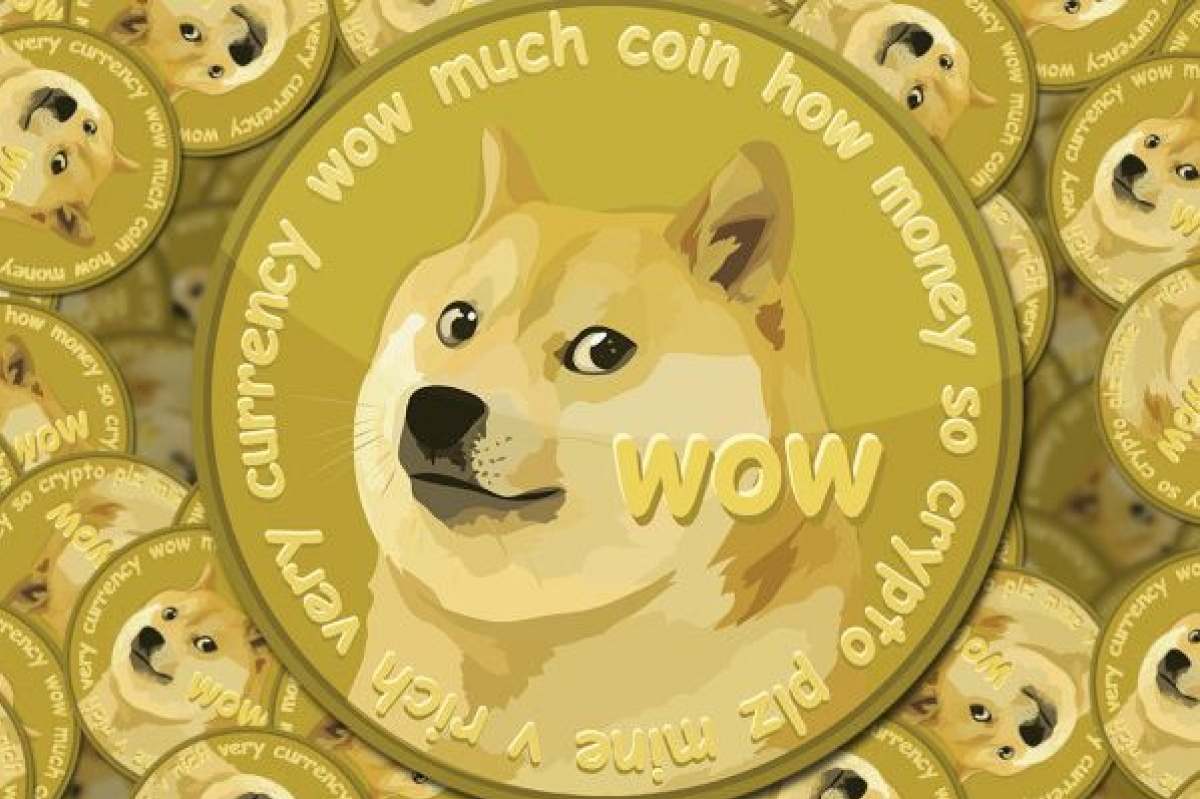 Dogecoin became available for the public in December 2013. Two weeks later the price experienced a 300% growth and declined again after a hack of the Dogecoin wallet that led to a theft of millions of Dogecoins (all the coins were compensated to the victims by the Dogecoin community through the donations one month later). Soon DOGE became listed on many exchanges (currently the coin is available on dozens of crypto exchanges including such giants as Kraken, Binance, OKEx, and Huobi). In 2014 Dogecoin community encouraged people to donate $50,000 in DOGE to Jamaican Bobsled Team so it could arrive in Sochi to participate in the Winter Olympic Games. The action turned out to be successful. Soon after Eric Nakagawa in collaboration with Charity: Water raised $30,000 in DOGE to fund building well in Kenya. The same year, the Dogecoin community has successfully raised $55,000 in DOGE needed to sponsor the NASCAR driver Josh Wise who participated in the number of races in the car with the Dogecoin and Reddit paraphernalia. In 2015  Jackson Palmer retired from the project however, the coin is still popular and in active use. After the departure of Palmer, the coin had no notable upgrades, neither it has a whitepaper nor a roadmap. Dogecoin turned out to be a success and made its way to the top 50 cryptocurrencies by market capitalization.

There are several ways Dogecoin is used as a currency. On Reddit, Twitter, and Imgur, DOGE is used for tipping the creators of content. The money can be sent via the bot developed by the enthusiasts from the Dogecoin community. The charity events with DOGE involvement are not so frequent as they used to be in the early days. However, if it was possible in the past to raise Dogecoins worth of thousands of dollars, we believe that it can happen anytime again.

In the late 2010s, the Reddit Dogecoin community did a series of charity events for homeless raising funds in DOGE. There were such initiatives as DogePizzaForHomeless and SocksForHomeless that were successfully fulfilled.

As the community is the driver of the Dogecoin infrastructure, it's no wonder that these people, not the dev team, are responsible for creating tipping bots and other apps aimed at making the use of DOGE easier. One of the best examples is DogePal, a payment network for DOGE transactions where people can send each other DOGE coins using email addresses.

More than that, a number of merchants accept DOGE as a means of payment. This coin was used by individuals for buying diverse stuff: from the Internet domains to real estate. Despite being quite an average coin in terms of technology, the asset value preserves itself due to the efforts of its community. The power of people using this coin moves the price forward and keeps this asset in the light spot for years. At some point, Elon Musk referred to Dogecoin as his favorite cryptocurrency.

The network is based on the Proof-of-Work consensus protocol which makes this coin minable. Dogecoin is an inflationary currency as it has no supply limit and new coins will be mined again and again increasing the total amount of circulating DOGE. Block time is 1 minute. The transactions in DOGE are quite cheap. The fee is around 1 cent. At the same time, the Dogecoin network is much faster than Bitcoin. It is capable of performing 30 transactions per second (the Bitcoin network is doing only around 7 transactions per second). 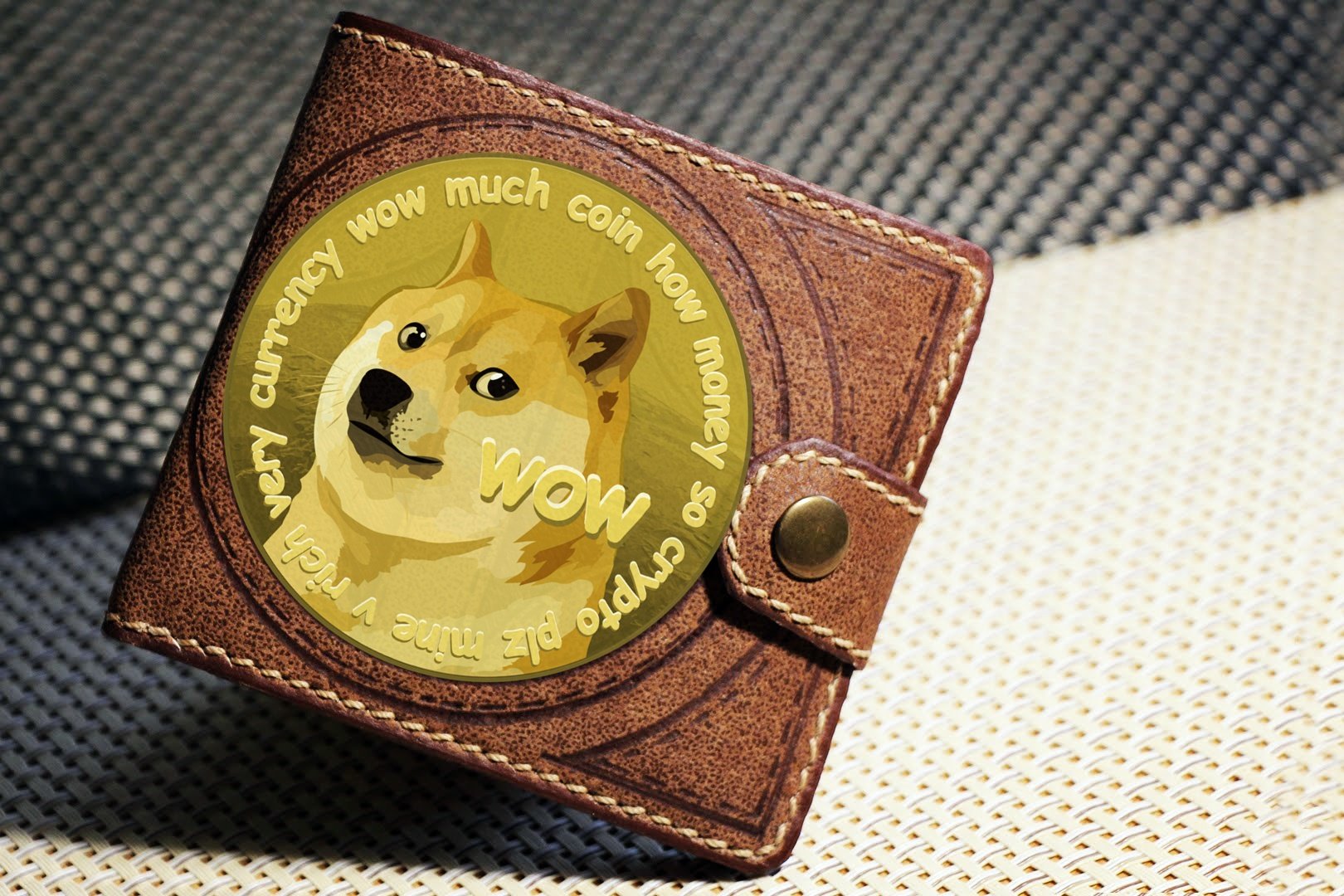 The consensus algorithm used by Dogecoin is different from the usual Proof-of-Work. It is called Auxiliary Proof of Work. Thanks to it, DOGE coins can be merged mined with Litecoin. It means that DOGE can be mined simultaneously with Litecoin without performing additional work. On one hand, this feature helps Dogecoin to avoid 51% attacks, on the other hand, it preserves the relevance of Dogecoin as many people are mining a popular currency Litecoin, making some DOGE as a bonus that can be used for this or those purposes. Since  2018, the block reward is 10 000 DOGE. This altcoin is supported by several multi-currency wallets including the popular platforms Atomic Wallet, Exodus, Freewallet, etc. Moreover, DOGE can be stored in a Dogechain wallet.

The AltQuick exchange added a DOGE/USD trading pair in 2014. That was the beginning of the DOGE exchange trading history. Currently, DOGE is available on numerous cryptocurrency exchanges.

Throughout its history, Dogecoin had its own market trends which at times were different from the overall contemporary cryptocurrency market tendencies. Most of the spikes were triggered by community activity (fundraising events, flashmobs, and so on). Of course, the coin didn't exist in total independence from the rest of the market. DOGE reached its all-time high roughly at the same time as almost any cryptocurrency — on January 7, 2018 ($0.018773).

Obviously, the coin has a future. The developers did nothing to improve the coin in the last 5 years. Logically, this coin should have been abandoned by 2016 but it didn't happen. Its ability to survive and gain attention from time to time is coming from the power of DOGE's community and cryptocurrency whales doing price manipulation. We can predict where the Dogecoin's price is going to, but first, we should observe the way behind this coin in detail.

By the end of the summer, the average price of Dogecoin was around $0.00013 and even declined a little more during the next months. The next positive news for Dogecoin investors came in late January 2016 when the price regained a $0.0002 support level. At some point, it even hit $0.0005 for a while but soon dropped to $0.00034 and then lower. Most of the time, the price was going back and forth around the $0.00023 mark until June. In the first summer month of 2016, the price reached $0.0003 and then kept around this level although mostly a little below this mark. During the summer, the average price was decreasing gradually and declined to around $0.00023 in August. By the end of the year, it was rather around $0.0002. The price was quite stable until the spring of 2017 when the cryptocurrency market had begun to warm up. This time, DOGE had followed the general trend and the price gradually began to rise. In March the coin was trading at $0.00023 - $0.0003. In April, the average price climbed to around $0.0004. The spring of 2017 was full of anomalies. For example, despite the fact that most of April Dogecoin was traded at $0.0004 several times the price peaked at $0.0006. In May, the price had crossed the $0.001 mark. By the end of the month, the price was already $0.003. 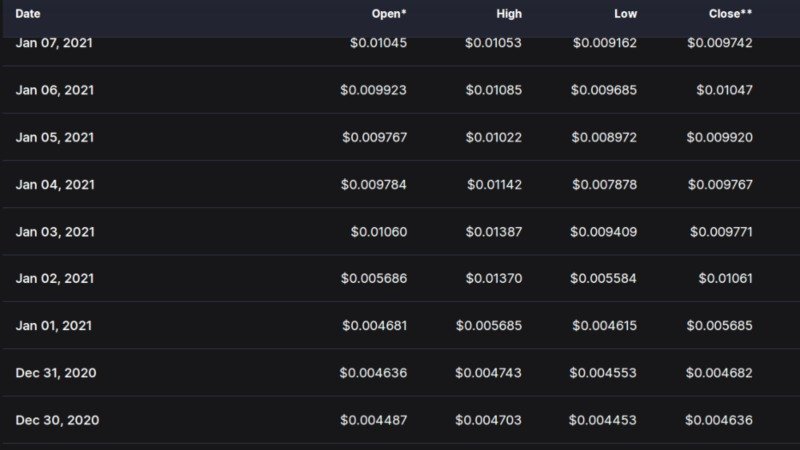 2020 wasn't very bright. In March the Dogecoin price had dropped together with the prices of most cryptocurrencies after the traders' panic amid the financial cataclysm triggered by the oil price downfall and the COVID news. In July thanks to a TikTok challenge, DOGE managed to gain $0.005 for a while. For most of August, the price was close to $0.003. In September it went below. By late November the price saw a small rekindle reaching $0.0035 and even $0.004 in December. 2021 was a big year for Dogecoin. Thanks to the support of Elon Musk and the Dogecoin's jolly community the coin has entered the top20 list of crypto by market cap. As of February 2022, the price is above 15 cents.

The events of 2020 have plaid out well for the crypto market. People and institutions have paid attention to the benefits of cryptocurrencies in conditions of financial turbulence. It had led to a crypto market spike and Dogecoin price saw rapid growth, too. As DOGE has a history of use cases, it's popular, and it is already capable of performing relatively quick transactions, it won't leave the market once and forever. The strength of the coin's community has proved that the DOGE price can keep on rising regardless of what happens with the rest of the market. More than that, as Dogecoin is sometimes considered by merchants, this coin will have a bigger exposure and growth.

The tech side is quite weak

The Best Coin Ever!

The best currency ever!

This coin is a vehicle to boost your marketing. For instance: Elon Musk, John McAfee...

has a really good community unlike the other ones, good laughs all the time.