There are several cryptocurrencies that are considered to be anonymous or privacy-focused coins. The best-known coins are Monreo, Zcash and Dash. Today we will review Dash. We will figure out if this coin is a worthy investment, we will make a price prediction, and tell if Dash is a scam.

Dash is a cryptocurrency forked from the Bitcoin chain in 2014. Additionally, Dash is a decentralized autonomous organization (DAO) run by independent masternodes. The currency is privacy-focused. The transactions are believed to be untraceable. As a currency Dash quickly gained notable popularity and got to the top 30 cryptocurrencies by market capitalization.

Initially, the currency was set by Evan Duffield under the name of Xcoin in early 2014. After a row of pump-and-dumps, the coin has changed its name for Darkcoin. In 2015, Dash got its current name that simply means "digital cash". In 2017, the project received business support from Arizona State University and provided finance of the blockchain research lab in this institution in exchange. The same year Ryan Taylor became the project’s CEO. 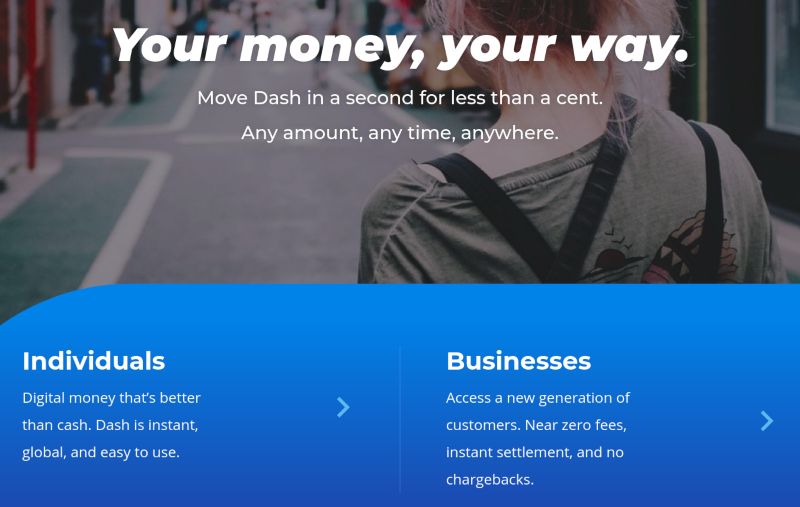 The Dash network is transaction-heavy, meaning that despite the fact that its market cap is not the biggest one if compared to other top coins, the currency is in active use around the world. By some accounts, in 2019 Dash was the primarily used cryptocurrency in Venezuela where the national finance system had nearly collapsed by that time. Dash successfully made its way to numerous cryptocurrency exchanges including Coinbase Pro, Binance, YoBit, Huobi Global, HitBTC, OKEx, and many others.

Just like many other Bitcoin forks, Dash was created to fix the known issues associated with the Bitcoin network and gain mass adoption. In the case of Dash, the main directions of development were the strive to make governance and the transaction speed faster and increase the anonymity of the network to the maximum possible extent. More than that, Dash transactions are very cheap, which makes them outstanding in comparison to Bitcoin as well as all of the centralized platforms (e.g. PayPal, Western Union, and so on).

As for governance, the Dash network heavily depends on the decisions made by the decentralized system of masternodes. These nodes are run by the holders of at least 1000 DASH. This requirement protects the ecosystem from Sybil attacks. Other requirements that masternodes must meet are the certain minimal network bandwidth, sufficient CPU power, and enough RAM and free disk space. Moreover, people running masternodes cannot change IP addresses while doing so.

The duties of masternodes include Dash transactions validation, storage of the blockchain copy, voting on the upgrades on the Dash network, and retranslation of messages. Moreover, it's fair to say that people running the masternodes are Dash shareholders. As Dash relies on Proof-of-Service protocol, the masternode runners must maintain the fully updated data all the time and never go offline. Besides the governance, masternodes are responsible for such functions as PrivateSend and InstantSend. Currently, there are nearly 5,000 masternodes in the Dash network.

Other participants of governance of the Dash ecosystem are standard nodes and miners that mine Dash the way Bitcoin is mined using the Proof-of-Work protocol. 45% of the mined coins are distributed between the miners, the other 45% goes to masternodes, and 10% is used to cover the costs of the development team, PR, and so on. It makes Dash a completely self-funding and self-governing project.

Dash provides a function called InstantSend, a 4-second transaction. InstandSend works without the validation of masternodes and requires no mining. It makes these transactions much quicker. Complete anonymity is not a default feature of Dash. In order to make the transactions fully private, users should initiate PrivateSend transactions. This type of transaction makes it possible to confirm the fact of the transaction in the ledger anytime, however, it is impossible to retrieve the data of the origin of the sent assets and get any info about the accounts involved as this info gets blended. What's more interesting is that in the case if foul play is involved, the law enforcement will be able to confirm this information using the Dash ledger which makes Dash an uncomfortable platform for covering the crimes up.

In order to avoid the ASIC-miners' influence on the network, Evan Duffield created an algorithm X11. In general, this algorithm is similar to SHA-256, however, the differences are what matters. X11 uses 11 hashing functions that provide quick hashes for CPU and GPU miners. Creating an ASIC that will be able to deal with these 11 mining functions was quite a hard task. So it was considered that for a long time the Dash miners will be able to mine DASH using only CPUs and GPUs and the network won't be controlled by the ASIC-rig farms' owners. Nevertheless, in 2018 the first ASICs capable of mining DASH emerged on the market. Unlike SHA-256, X11 doesn't require much power and uses GPU in a gentler way in order to prevent overheating and further wear out of the device. The same reason makes mining via the X11 algorithm less costly as it doesn't require much electric power.

Since the day of the appearance on the market to its historical maximum Dash managed to rise in price excessively. The initial price of the coin ($0.213899) stays the lowest price it ever had while the all-time high was as big as $1,642.22. It happened on December 20, 2017, about the same time as BTC had its historical maximum. In general, there are many similarities in the price trajectories of both currencies as they have much in common.

Dash became available on the market on February 14, 2014. On February 17, the coin price already reached $1.5 at some point. For the next couple of weeks, the price was volatile, going from $0.4 to $4 and back. In March, it was less turbulent and by late April, DASH got to the support level of $1. In one month, the price reached $10 and kept on rising until the drop in July. Since July the price kept on declining with stand-alone short spikes. By the end of October, the price was around $2. Until March of 2015, Dash preserved this value having short-term moves up and down at times. Since March, the growth continued, however, it was not as notable as the early exponential rise in price. The March rally is associated with the rebranding of Darkcoin into Dash and the respective promotion of this currency. Interestingly, some of the Dash trends of that period don't coincide with the ones of Bitcoin. It showcases that the Bitcoin influence wasn't as big at that time, as it's now. On the other hand, it indicates the huge early support for Dash.

Until the end of 2015, the price was oscillating around $2 - $3. In January 2016, Dash began to rise gradually reaching values of $4 - $5 and moving further in April and May ($6 - $8). Bitcoin was on the rise those days, too, however, its growth wasn't as fast as Dash's expansion. In August, Dash reached a new support level of $8. By February of 2017, the price began to rise quickly reaching $40 in early March and then crossing the $100 on March 20. Soon the price had dropped to around $70. It gained a $100 support level by late May and was moving higher in the following weeks. In July the Dash price was around $200. In the fall months, it already reached $300 and continued to grow bigger together with the entire cryptocurrency market. On November 20, the price had crossed the $500 mark for the first time and peaked at $815 9 days later. On December 16, the Dash price reached $1,000 and hit its historical maximum on December 20 at $1,642.22.

As the currency proved its relevance and significance in the past, it will likely keep on occupying a high position in the lists of the best cryptocurrencies in the future.

Dash price will keep on growing together with the best crypto market players. The financial cataclysms of 2020 revealed the pros of cryptocurrencies to a wider audience and brought more professionals to the market. It cements the positions of consistent crypto projects. It is obvious that Dash is one of the best products on the market. By the end of 2021, its price may reach up to $218. The worst scenario is keeping the January peaks (~$150) as the maximum price.

The years of the economic crisis will strengthen cryptocurrencies and expose them to a bigger audience of users, investors, and entrepreneurs. Dash keeps on developing and both the coin evolution and surrounding circumstances will fuel its price further. The price is likely to triple by the end of 2023 and reach around $600.

It's hard to predict the price Dash might have 4 years from now. Technical analysis won't give the correct estimation as there are too many factors that can't be considered right now. It is expected that by 2025 the traditional financial system will fully recover from the covid-related crisis. It means that the cryptocurrency market will slow its growth. It might take several years for DASH to gain $800 per coin. That's what we expect.

This coin is my favorite. Low fees and fast transactions make me to get deeply involved into trading with it. I’ve never faced any big forks or pending.

Are there any disadvantages？I guees, its not. You can find DASH almost on every popular crypto platform. It runnings like clockwork, no sick moves. I’d highly recommend it.