Basic Attention Token (or BAT) is a utility token and ad exchange tool associated with the Brave browser ecosystem. BAT is an open-source decentralized project based on the Ethereum blockchain. The platform was launched by Brendan Eich, a creator of Javascript and Mozilla Firefox co-founder. The Brave browser is based on the Chromium web-browser.

BAT has a market cap of over $400m. The token has already paved its way to the top 30 biggest cryptocurrencies. Vice, Vimeo, Guardian, DuckDuckGo, WashingtonPost, SourceForge, CoinMarketCap, LA Times, and many others are among BAT publishers. In December of 2019, the company reported having 10 million active users per month.

BAT tokens can be stored in wallets that support ERC-20 tokens or in the Brave wallet, which was created specifically for BAT. It's integrated into the Brave browser.

What Is the Concept of the Brave Ecosystem?

The attention of people spending time on the Internet cannot be given away to publishers and advertisers for free by default. People should not spend their attention to third parties without consent. We waste a lot of time because we are distracted by commercials and because ads make browsing slower. Brave ecosystem challenges this status quo using blockchain technology and cryptocurrencies.

The very concept of BAT is aimed at changing relations between users, advertisers, and publishers creating a separate ad space where ads can be easily switched off by users. If users opt to watch ads they get rewards from advertisers in BAT tokens. Users can donate BAT tokens to content creators or use it on the platform. Another option is selling these tokens via the Uphold, a Brave's partner providing the cryptocurrency exchange functionality. 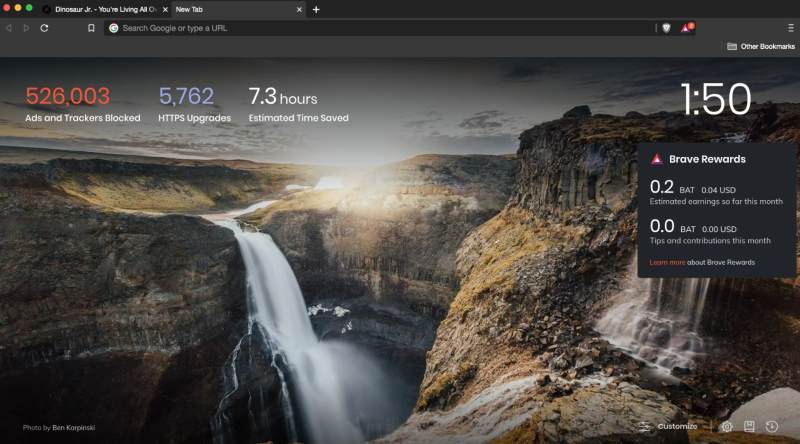 Users choose between the lack of ads and selling their attention while watching personalized ads, advertisers get more accurate statistics and high performance, publishers get secured from fraud. All the data collected from users is stored locally on their devices. Besides the option to turn off the ads, the Brave browser is capable of blocking the trackers. It makes Internet browsing more private. The browser doesn't let the websites collect cookies by default. More than that, it protects users from such a method of data collection as fingerprinting. According to the company itself, Brave uses a better targeting engine to provide people with useful ads instead of annoying commercials of things they don't really need. That's a great move considering the fact that targeting algorithms of the tech giants are really weak and in many cases, we are distracted by the ads of the things we already have or don't need.

The ad network, launched by Brave in late 2019 returns users 70% of revenue. Users consenting to watch the ad campaigns receive ads in the form of the device notifications. The rewards in BAT are sent to the users' personal wallets attached to browsers. The ads are picked in accordance with the individual browsing history of each user. The user data never leaves the device on which it was gathered. This is made to pursue the safety of the user's privacy.

The attention is measured in scores. The system takes into consideration the pages that are viewed for at least 25 seconds. The data is stored on the Brave ledger. Some of the info that cannot interfere with the users' privacy is sent to publishers. It is necessary for proper targeting and rewarding. 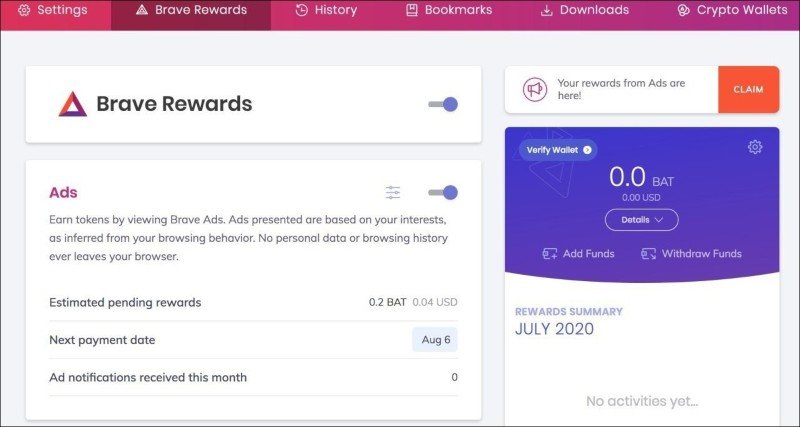 How else can we benefit from getting rid of unwanted ads in its modern-day form? The New York Times research reveals that Americans pay $23 a month for the load of the ads solely. 21% of the device battery is wasted on the banners, videos, and other commercial content. The expense of this content is usually 2 or 3 times less than the energy expenses associated with downloading this content. The tracking (which is blocked by Brave) consumes much energy, as well. The blocking of the ad content leads to faster browsing. Currently, the Brave browser is regarded as the fastest one.

Interestingly, it turns out that ads are distracting, annoying, not useful in many instances, broadcasted without our consent, and it devours one-fifth of our batteries, and we have to pay for it! Fighting this status quo seems to be a pretty well-reasoned intention.

Another important direction is erasing the distance (and intermediary) between ad publishers and advertisers. The sound statistics and fair payouts can be affected badly by the middlemen. At times, advertisers are subject to fraud which is not likely to happen while using platforms like Brave. Brave provides the opportunity for content makers, public, ad publishers, and advertisers to communicate and exchange data and money in a decentralized peer-to-peer manner. In the future, Brave is going to let users receive rewards for sharing certain content of the publishers who use Brave.

Basic Attention Token is currently (as for July 9, 2020) the 33rd cryptocurrency by market cap and is listed on many exchanges. The biggest BAT liquidity is coming from Binance, Coinbase Pro, Kraken, Huobi Global, BKEX, CoinEx, and CoinBene.

Basic Attention Token first hit the market in June 2017 right before the unprecedented rise of the entire cryptocurrency market. The token's starting price was around $0.168. Soon after, BAT peaked at over $0.3 and then dropped below $0.2. Probably due to a short decline in the Bitcoin price, the BAT's price kept on decreasing in July, reaching the all-time-low by July 16 (the price was as low as $0.066). By the end of July, BAT was $0.1 and gained another 10 cents in the following days. The BAT's price was fluctuating from 15 to 30 cents for several months. By the end of October - beginning of November it became less volatile oscillating in the 11 - 17 cents interval. In November BAT was listed on Binance however it didn't boost the price too much. It's better to say that BAT became more stable at around $0.17. The next month, the token was listed on Huobi. These listings combined with the general cryptocurrency market warmth had led to the fast growth of the BAT's price. By the end of December, BAT was already above $0.4 and reached its all-time high on January 9 at $0.98.

The following changes in the BAT price were quite similar to the overall cryptocurrency market that experienced a decline as the result of the chain of anti-crypto regulations, exchanges hacks, and so on. In February the price was moving in the 33 to 48 cents interval. In March the price dropped below $0.3 for a while. In April there was a short resurgence triggered by the temporary BTC price growth but in May both currencies have dropped again. Most of summer 2018, the BAT price was between $0.2 and $0.3 with short-term rallies and downfalls. Until the spring of 2019, BAT was below $0.2 most of the time. Only in October, it had a recovery reaching over $0.27 (at that period, the token was listed by the BKEX exchange). In April 2019, the price crossed the $0.3 mark and peaked at $0.499. Until the middle of July, BAT was quite stable at the over 30 cents level. In August, the price dropped below 20 cents despite the fact that BAT was added by one of the biggest exchanges, Kraken. In September of 2019, the price was around $0.2. It started to grow in October, reaching over $0.25 by the end of the month. December was a low period for the cryptocurrency market and BAT wasn't an exclusion reaching its starting price once again.

Just like many other cryptocurrencies at the beginning of 2020, the BAT price has come through the growth prior to the March 12 downfall. On March 13, the BAT price was as little as $0.088 which was one of the lowest levels in the BAT price history. It is no secret that after this horrific downfall, cryptocurrencies showed a strong ability to recover amidst the global economic cataclysm. In early April, BAT already cost around $0.15. In May the price crossed the $0.2 level. During the summer and the fall of 2020, the BAT price has risen from around 20 cents to 40 and went back. Like the rest of the cryptocurrency market, in 2021, BAT saw a drastic growth. In March 2021, the BAT price crossed the $1 mark. As of May 11, 2021, the price of the token is $1.35 while the market cap is around $2 billion which grants the coin the 71st position.

As the Brave ecosystem keeps on developing and exploring new markets, we believe the BAT price will grow further in the future.

As the traditional money system has shown its weakness in the 2020 financial crisis, cryptocurrencies have predictably begun to grow. Moreover, the blockchain sector became a sphere of interest among fintech giants and other big players. BAT isn't an exception. In the atmosphere of overall crypto rave, we believe that by the end of 2021 the BAT price will gain value. There is a 58% probability that the BAT price will reach $1.66 by the end of the year. There is a 30% chance that the price will only get to $1.49, and a 12% that it will surpass our expectations and reach $1.73 or even more.

The crypto market will only get stronger in the next couple of years. We already see that tech giants and institutional investors pay more and more attention to the industry. That’s a good environment for such a project as Brave. Brave has released the first non-test version only in November of 2019. Naturally, the currency will have much higher adoption by 2023, especially, considering the current strong support for Brave as a project. By the end of 2023, it's OK to expect the price to reach $3.74 to $4.26 value.

It is not easy to tell what price BAT might reach in five years. We have too little info about future plans and events. Most probably, by that time the centralized economy will fully recover from the crisis caused by the pandemic and cryptocurrencies will grow slower. We guess that at worst BAT can reach $5.5 by the end of 2025.

Useful for many social groups

The concept has its critics

My daily desktop browser. Make beer money by watching and interacting with ads. The mobile brave browser is the best mobile browser out there. Bidirectional wallet was recently integrated, I just withdrew about 20 bat back into my bank. Took about 48 hours.

I think that this is one of the few crypto “coins” that will still have value and be relevant when we look back in three years.

There’s a solid use-case, and the value is in the execution, which was done well via the Brave browser project.

Highly recommend giving it a try!

BAT has a great perspective. I think. The tech team of the project is trying to provide fully developing. That’s a big challenge taking into the account the high level of the competition on the market. But I like how the prospect of Brave browser looks like and I’m going to support it.

This project got some interesting points. There is not only the token, but the browser as well. It’s quite a good one. I assume it is even faster than Chrome or Mozila. I like the way they’r developing. I am eager to see smth new from them.

It took me around one month to collect around $15 worth of BAT without even watching any ads (I just let the ad notifications but didn't open any of them throughout the time). Now guess what's my opinion on this product? I'm excited to see the further development of Basic Attention Token. In my opinion, this project has powerful potential.