BitTorrent is probably the best known peer-to-peer protocol in the world. Many use BitTorrent software to share files. By some estimations it is used by roughly 1 billion people. The protocol got famous long before the emergence of cryptocurrencies. Now, it has its own cryptocurrency. In this review we will name the main features of BitTorrent coins and tell if it's a scam, if it is safe to use, and if it is a worthy investment.

BitTorrent token is a cryptocurrency used as a means of payment on the BitTorrent platform. BTT is a TRC-10 token meaning that it is based on the TRON blockchain. The coin was launched in 2019 after the acquisition of BitTorrent by Tron Foundation. BTT has quickly become one of the most popular cryptocurrencies.

As of May 2021, BitTorrent is one of the top 50 cryptocurrencies by market cap which exceeds $2.7 billion. The price of BTT (on May 19, 2021) is $0.004. BTT is available for trading on the biggest crypto exchanges including Binance, Huobi Global, HitBTC, Bithumb, Gate.io, Kucoin, Bittrex, Poloniex, OKEx, etc. 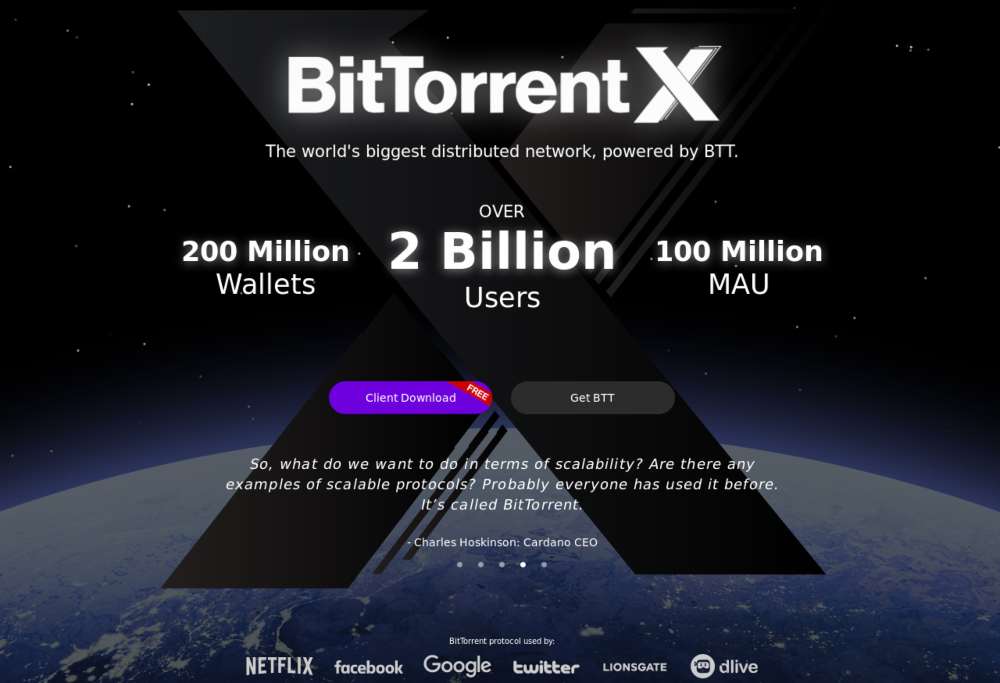 A peer-to-peer file-sharing network BitTorrent was created back in 2001. The protocol creator is Bram Cohen. The BitTorrent Foundation was created later. As a company BitTorrent is responsible for the launch of such BitTorrent clients as  μTorrent and Xunlei Thunder — two of the world's most popular torrent clients. Success of the protocol can be explained by its ability to transport large files (e.g. movies) quickly. The distributed files are downloaded from multiple sources simultaneously without the need of a wide bandwidth. There is no need to download pieces of files in a specified sequence, they can be downloaded randomly. Another nice feature is that the download can be paused any time and continued later without any issues. Thanks to BitTorrent, home computers became as efficient for file sharing communities as large servers full of content.

In 2018, the company was acquired by the Tron Foundation — an organization of Justin Sun, a TRON CEO. The BTT token was launched the next year. The BitTorrent team managed to gather $7.2 million via the ICO. Under the TRON influence, BitTorrent headed towards ways of monetizing its services. For instance, BTT token became a means to pay for some extra functions in the company's torrent trackers. For instance, BTT tokens can be used to request the missing torrent files or to pay for the better download speed.

Apart from trading and store of value, BitTorrent tokens can be used for several other purposes. First and foremost, the token can be used as an inner BitTorrent currency to buy paid services.

There are several decentralized apps (dApps) that can be used on BitTorrent. One of them is BitTorrent Speed that provides users a better bandwidth by request. Users updating their torrent clients to the latest version, get a free BitTorrent wallet automatically. Besides requesting a better speed, you can earn on BitTorrent Speed via usual seeding.

Another important use case is earning via BTT. BitTorrent users can not only spend their tokens via requesting certain services but also, they can earn BTT through responding to such requests and providing these services to others. In this sense, BitTorrent can be qualified as a services market.

Where Can I Store BTT Tokens?

There are several decent options for storing BitTorrent tokens. For starters, there is an integrated BTT wallet in the BitTorrent applications. You get this wallet by default if you use any torrent client by BitTorrent. Nevertheless, there are more options to take into consideration, as some wallets provide more features.

A multi-currency crypto wallet called Freewallet supports BTT tokens alongside many other coins. Additionally, there is a dedicated BTT wallet by Freewallet. All the products by this brand are easy to use and are available in the web version and mobile versions for Android and iOS devices. Freewallet allows instant coin swaps and provides other features, as well.

If you prefer hardware wallets, there is good news for you, too. BitTorrent tokens can be safely stored on the Trezor devices. Trezor is considered to be one of the most secure wallets. There is no surprise in it as this wallet is offline and has several layers of protection.

Another nice option is Atomic Wallet. This wallet supports less coins than Trezor or Freewallet, however it has something to offer, too. One of the best features of Atomic Wallet is that it has an integrated decentralized exchange so users can swap coins via the peer-to-peer protocol. BitTorrent token is one of the supported coins.

Actually there are many more wallets supporting BitTorrent tokens and that's a good sign for those of you who're trying to figure out if BTT is a good investment.

Two years after the token launch things changed drastically. In February 2021, amidst the overall crypto market boom, BTT token has finally skyrocketed. On February 8 the price was $0.00049. The next day it doubled and since then has never dropped below $0.001. On February 22 the price was $0.0017. It took one month to increase by 2 — on March 22, the BTT tokens were traded at $0.0035. The next doubling was achieved by April 3, when the price reached $0.0071. Finally, on April 5, the BTT price reached its historical maximum (as of May 2021) crossing the $0.0135 mark for a while. Ever since the price has been in a zigzag-shaped decline. 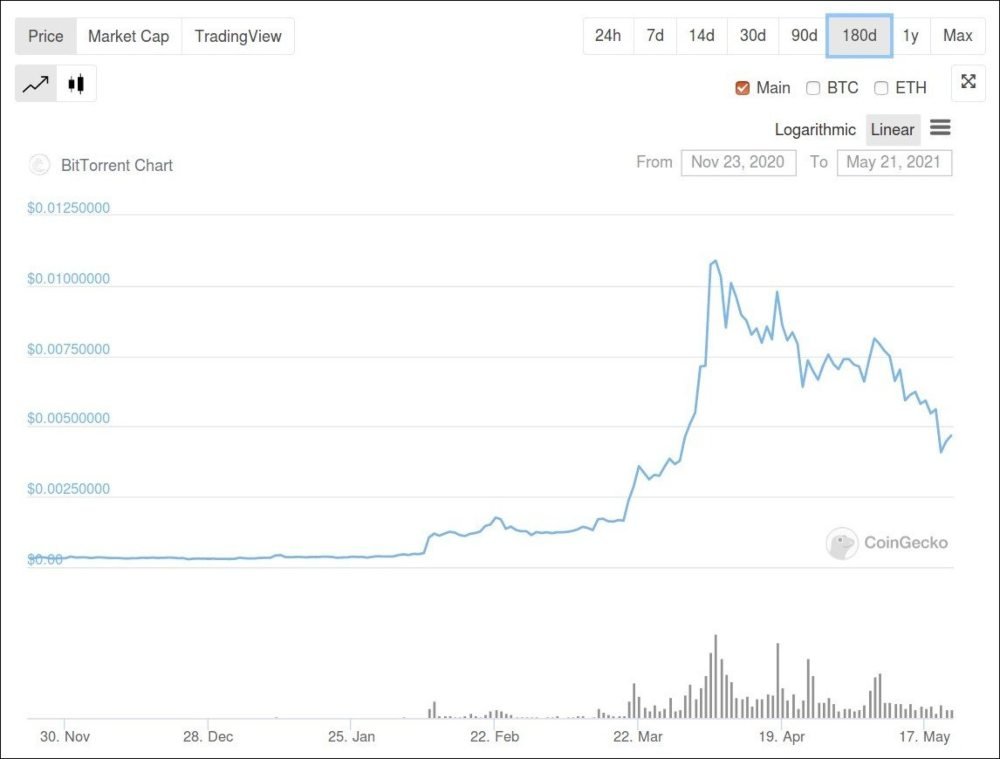 Partly this decline can be explained by the impact of the BTC price's sharp decline taking place at the same period. However, this downtrend shouldn't distract us from the fact that lately, BTT token price has grown significantly, notably distancing from its initial price. Considering the popularity and success of the BitTorrent products, we expect the token's price to grow bigger in future.

Numerous experts agree that BitTorrent token price will be increasing steadily in the following years. Most of them expect the price to reach 1 cent by the end of 2021. It seems quite realistic as the current decline isn't likely to continue for the entire year. More optimistic analysts say the price will reach $1 by the end of the year and triple in 2022. This seems less likely as the price recovery will take some time. There is a long way ahead until the coin will even reach a half of a dollar.

In general, there are no serious reasons that might make us think that BTT token won't grow bigger in the following years.

BitTorrent is a famous brand with millions of users

BTT has use cases

The coin is yet to prove its ability to grow without the entire crypto market rise up.