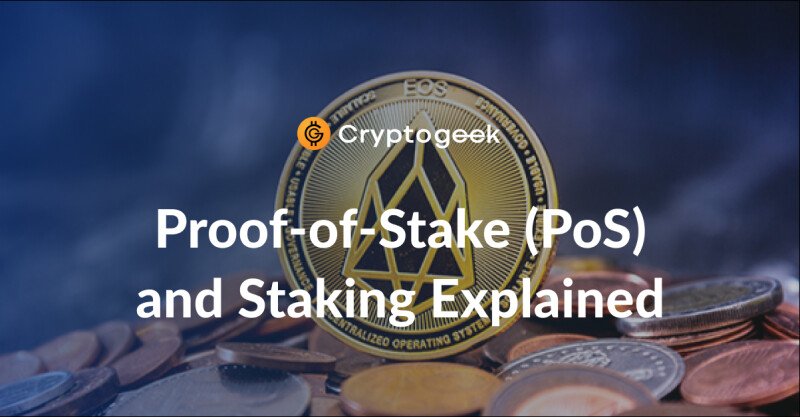 Bitcoin, Ethereum, and many other cryptocurrencies rely on the Proof-of-Work (PoW) algorithm. PoW is highly criticized for its environmental effects, impact on the GPUs market, and other reasons. No wonder another consensus algorithm has shown up. One of the most popular ones is Proof-of-Stake (PoS). As staking is integral to the governance of the PoS-based networks, people staking their money receive rewards from the system. This article will explain what staking is, what Proof-of-Stake is, and how they work.

On the user's side, staking is a process of earning rewards via holding and blocking specific tokens needed for the work of the network that uses these tokens as fuel.

The word "staking" refers to the notion of "stakes" that stand for profit shares that draw passive income. In the context of cryptocurrencies, staking takes place on platforms that use a consensus algorithm known as Proof-of-Stake or a similar one. Users lock portions of tokens in their wallets instead of spending/exchanging them, and after a certain period of time, they receive proportional rewards for holding ("staking") these coins.

Staking is used in the governance of the PoS-based platforms and for validating transactions. The amount of staked tokens determines the weight of the user's vote. The more you hold, the more significant your opinion on the platform is.

Proof-of-stake is a consensus algorithm responsible for creating new blocks of transactions. The minimum stake is required to become a validator of transactions. Users with bigger stakes have more chances to take the position of block producer.

PeerCoin is the first PoS-based platform. It was created in 2012. For years, Ethereum, which relies on PoW, has planned to change its consensus mechanism to proof-of-stake. However, as of February 2022, the approximate date of this upgrade is still not known.

Probably any person familiar with Bitcoin has heard of mining. That's how coins are being created in the proof-of-work-based networks. Mining requires the intensive use of computer power to crack numbers to get the correct hash of the next block of transactions.

In the proof-of-stake networks, coins are being produced via "forging," which also comes with validating transactions. Transactions get verified based on the staked funds (or funds blocked in the wallet as a stake). The amount of the locked tokens determines the profitability of staking/forging. Rewards are the validated transaction commissions.

As the cryptocurrency sphere is developing quickly, proof-of-stake has quickly become a subject to experimentation and upgrades. One of the best-known versions of proof-of-stake is delegated-proof-of-stake (DPoS). One of the popular platforms using DPoS is EOS. This algorithm implies that stakeholders don't validate transactions themselves. They vote for several delegates ("block producers'') who perform the platform governance.

Another variation of proof-of-stake is leased-proof-of-stake (LPoS). Waves blockchain uses this consensus algorithm. The platform users lease their tokens to one (preferred) of the nodes that will serve as a block producer.

One more is called "proof-of-stake-velocity" (PoSV). This consensus algorithm was introduced by Reddcoin. When PoS means that you collect many coins and stake them once, PoSV incentivizes users to stake coins regularly.

The list goes on and on. The versions vary depending on the use case of the network. For instance, some algorithms require users to provide hard drive space or store data. Also, developers look to offer more profitable conditions to attract more users to their platforms.

DPoS is probably the best-known PoS variation. All the governance on DPoS-based platforms is performed by a limited group of nodes elected by platform users via staking.

The concept has sprung as early as 2013. The inventor of DPoS is Daniel Larimer, who later took a significant role in creating yet another "Ethereum-killer" called EOS. Stakeholders vote to elect block producers. The more coins you stake, the bigger the weight of your vote is. The candidates are public and do their best to attract attention and offer competitive innovations to the platform users. They validate transactions, create blocks, improve the work of the network, etc. Those block producers who fail to please their electorate won't have a big chance to be re-elected. As elections take place daily, the platform won't have to suffer from the wrong choice for four years. Those candidates who have yet to make it to delegates but hold huge stakes are called "witnesses." The network also uses the nodes of witnesses; however, unlike block producers, witnesses cannot change the platform's rules.

Caring about language and mutual understanding of ideas is never too early.

'Stake' determines the strength or weight of your 'vote'. When I choose BPs to run #EOS I vote for them. I'm "voting for block production" exactly as you just stated here. https://t.co/CanBMaxRK7

Actually, you don't have to vote every day. If you vote for the same candidate each time, you just elect them once and lock your tokens until the moment when you change your mind. That's when you will need to vote the next time. That's why the vast number of tokens on DPoS platforms are locked all the time. However, many tokens are in circulation, as well. No one but you can decide what you should do with your tokens. You can unlock them as soon as you want to perform transactions with your tokens. The amount of stake is your choice, as well. Smart contracts power all the governance. The biggest DPoS platforms are EOS and Tron.

Who Can Participate in Staking?

Any person with access to the Internet and spare money can participate in staking. In contrast to PoW, which requires building/buying and maintaining a mining rig and increases electricity bills drastically, PoS is very easy. Still, if you think of big profits, you will have to invest significant amounts.

Today, features aimed at improving the staking experience are supported on multiple crypto wallets and exchanges. For instance, on HitBTC, one of the most advanced and long-standing crypto exchanges, you can choose from many profitable staking options. HitBTC maintains one of the deepest liquidity pools used for the decentralized finance sector and always has something to offer its users.

Sep 08, 2022 0
ethereum pos proof of stake staking eos waves delegated-proof-of-stake dpos reddcoin daniel larimer
The opinions and assessments expressed in the text are the views of the author of the article and may not represent the position of Cryptogeek. Do not forget that investing in cryptocurrencies and trading on the exchange is associated with risk. Before making decisions, be sure to do your own research on the market and the products you are interested in.