What Are Privacy Coins, How Do They Differ From BTC & ETH 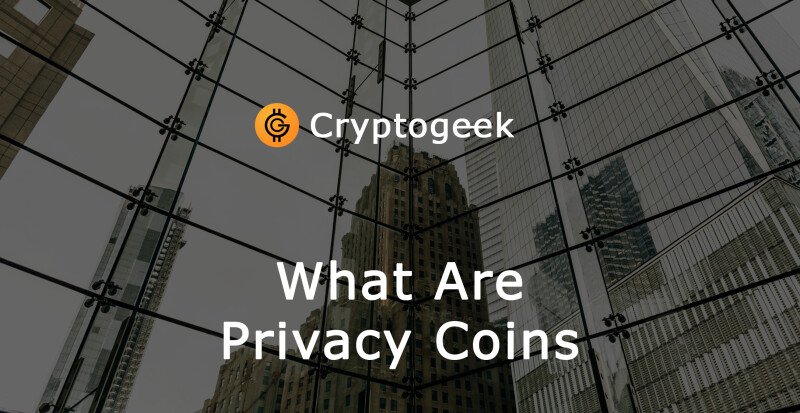 Then we can understand why the future of cryptocurrency needs privacy, and how this protocol can change everything.

Satoshi Nakamoto invented Bitcoin and cryptocurrency partly in response to the 2008 market crash. It was intended as a hedge against government's and their flawed monetary policies. It was supposed to take the control of our economic system out of the hands of greedy bankers who had leveraged the entire system to the brink of disaster, and instead put it back in the hands of the people.

By using a system that was transparent and trustless, third party intermediaries like banks could be removed from the picture altogether. And because of the blockchain's encryption, cryptocurrencies like Bitcoin and Ethereum carried a form of built-in de facto anonymity and privacy. Unfortunately, that changed.

While most people either didn't care or didn't notice— not everyone agreed with the centralization that was taking place in the crypto space. The foresight that some community leaders had - envisioning regulations, centralized control, and lack of financial privacy - led to the development of privacy coins.

Using extra layers of military grade encryption, and programmatic enhancements to obscure your financial transaction data from the developers themselves, tokens like Monero and Haven Protocol managed to keep privacy at the forefront of their projects.

And while currently this may not seem like a ‘big deal’ keeping regulatory agencies, centralized government, and corporate interest out of our financial lives is going to be increasingly important in the future given recent trends.

Why Does This Matter?

The trend in our financial lives has been a gradual move towards digitization. While this progress is exciting and new, what’s not being examined in our developments is the accompanying questions about privacy, power, and control over data.

In its benign form, you can consider the use of your data as a means to drive unique advertising based on your latest expenditure. But the darker side of this involves regulatory bodies using the data to directly influence you and the population.

For example, once your financial transaction data is known, regulatory bodies (or corporations for that matter) could begin incentivizing purchases they deem beneficial to the public good while penalizing those with which they disagree. Perhaps it’s alcohol or cigarettes for students, or perhaps its Vitamin D or organic produce in a pandemic. What the regulatory bodies need to control your spending is insight into your financial life, and the ability to control your money - a process that is already happening.

Take China as an example. The rollout of their Central Bank Digital Currency (CBDC), the Digital Yuan, happened this year. The data of all financial transactions now flows to the CCP, and when eventually tied with the social credit system, will unleash the control that the government seeks.

But this is not isolated to the Far East. The United Kingdom is pondering a move to a CBDC, Canada and the US have expressed interest, and the Government of Mexico announced they will be launching their own in 2024.

A CBDC gives the government push-button control of every aspect of a citizen's economic life.

As there have been some rather shocking precedent's set in the wake of the recent trucker protest in Canada, where the government and banks froze the accounts of protesters retroactively, we can easily see how giving governments access to our financial lives can end in disaster.

And once given, it will be near impossible to recover.

Why Can’t Bitcoin or Ethereum Help?

The original promise of cryptocurrencies like Bitcoin and Ethereum involved the elimination of middlemen like banks and other financial institutions. While you can view the funds in your savings account and withdraw money when needed, the banks were free to use your money to create more money, to leverage 10-to-1 for economic liquidity and to drive profits. Knowing that if they were to-big-to-fail the government (and really the taxpayers) would bail them out, they took liberty with the system. Betting far more than the system could handle.

Bitcoin and Ethereum were invented as a way to give control back to the people.

It is for this reason that we can understand why originally, transparency on the blockchain was touted as a feature. The idea was you couldn't be cheated if you could watch monetary flows occur with an immutable record. The technology would force people into proper dealings, allowing everyone to view what was going on.

But what this neglected to consider was a safeguard for your privacy.

Bitcoin, Ethereum, and the multitude of blockchains that are rapidly developing now, have all neglected to consider that transparency cuts both ways - good and bad. Transactions on both blockchains are available for anyone with the appropriate technical ability to see, which means that regulatory bodies, corporations, and even bad-actors, if they have the technical capability, can see your transactions and eventually correlate who you are.

Taken one step further, this means that addresses can be blocked, accounts locked, and restrictions placed on individuals or groups of people as required. You need not look further than Canada or the current situation in Russia to see how quickly this can be implemented.

Bitcoin, Ethereum, and other cryptocurrency then, do not protect your privacy, or give you the anonymity that you may have thought. Privacy coins and private finance (PriFi) are the only options available at this time.

Privacy coins work by obscuring all transaction information on the blockchain. Each privacy coin, and there are many, has their own function, but for the sake of brevity, we'll talk about Monero and the Haven Protocol here.

The Monero blockchain uses something called stealth addresses and ring signatures to obscure transaction data on the blockchain, giving complete control over access to each transaction to the users. In cryptography, a ring signature is a type of digital signature performed by any member of a set of users that each have keys. Therefore, a message signed with a ring signature is endorsed by someone in a particular set of people.
What they do is make transaction details, such as the identities of senders and recipients, and the amounts of every transaction, anonymous by way of disguising the addresses used by each participant.

In contrast, Haven Protocol, which was built on top of the Monero blockchain, uses the same set of technologies to perform the same privacy preserving functions as Monero, but with the added benefit of being a stablecoin and not subject to the same volatility as Monero.

So why bother with all of this?

The call for privacy, and privacy coins in general, isn't about hiding transactions from government oversight. It's about providing a layer of protection from overzealous regulators or anyone else who would infringe upon the inalienable human rights of the individual.
At the heart of freedom is your ability to transact with who you want. To buy what you want, when you want. To support and fund the businesses and organizations that you think have the best products, services, or intentions.

As we progress into the digital future, bitcoin and ethereum will undoubtedly play a vital role in financial wellbeing, and as a platform for others to build upon. But privacy coins will be at the forefront of our discussions about freedom in the digital world, as they will be the instruments that will allow you to transact freely.

Privacy, like all of our rights, is one that if we don't protect, we risk losing to those who would rather control us.

We say, why not maintain control over our financial data, and use bitcoin, ethereum, and other cryptocurrencies only when needed? Ultimately it’s our freedom to transact that’s at stake.

If you'd like to learn more about how to protect your financial transactions and avoid centralized authority from controlling your finances, join Haven's Discord channel, or research PriFi to learn more.

Once Harlequin discovered crypto in 2014, the question 'what is money' took hold and Harlequin became fascinated by the possibilities of decentralizing trust. Working in the tech industry, it was clear to Harlequin that we all have very little privacy in the digital world. Harlequin wanted to change this. Upon discovering Haven, these two passions collided and the concept of a private stablecoin ecosystem immediately made sense. If you’re interested in joining the conversation and learning more about PriFi stablecoins, you can learn more by going here: https://havenprotocol.org/

bitcoin blockchain ethereum crypto privacy coins
The opinions and assessments expressed in the text are the views of the author of the article and may not represent the position of Cryptogeek. Do not forget that investing in cryptocurrencies and trading on the exchange is associated with risk. Before making decisions, be sure to do your own research on the market and the products you are interested in.