The Most Environmentally Friendly Cryptocurrencies 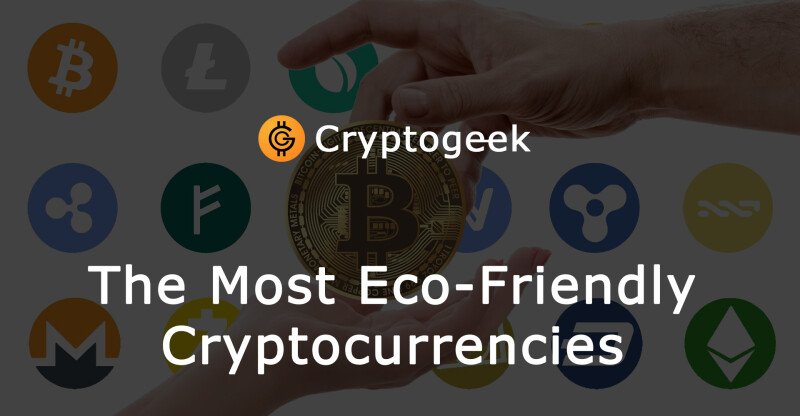 Elon Musk has recently announced that Tesla will no longer accept Bitcoin as payment for its electric vehicles, in response to a report that suggested that Bitcoin mining is not environmentally friendly, as a result of the energy consumption that it encourages. This news sent shockwaves amongst the cryptocurrency community and led to the question; how eco-friendly is the use of cryptocurrency? And is one cryptocurrency better for the environment than another?

How Environmentally Friendly is Bitcoin?

It is cryptocurrency 101 to know that bitcoin has to be mined; it generally takes an average of 10 minutes to mine a single bitcoin, and you mine bitcoin by solving a computational puzzle. Working on the basis that one bitcoin can be mined in ten minutes, it will take approximately 72,000 GW of power in order to mine that single currently. Bearing this in mind, it inarguably takes a considerable amount of energy to mine Bitcoin, but a new study published by cryptocurrency investment firm Galaxy Digital has shown that Bitcoin mining actually uses half the amount of energy that is used in traditional gold mining. So, despite the high-profile concerns of Elon Musk, Bitcoin is still a viable, environmental alternative to conventional currency. But whilst both of these studies have focused on Bitcoin, and its impact, it does lend the question, is there a more environmentally friendly form of cryptocurrency?

There is a new cryptocurrency on the block, and Nano has explicitly marketed itself as an eco-friendly cryptocurrency. Whilst it doesn’t have the solid ten-year track record to back up its claims (and provide consumer confidence) that Bitcoin has, what we do know is that they are a company committed to environmentally-friendly practices. Nano claims that they don’t do any “mining, minting, or printing” in order to produce their currencies and transactions can be processed on standard PCs (with no special equipment needed) in just seconds. It is for these reasons that Nano is appealing to consumers who are looking for a cleaner alternative to other cryptocurrencies, specifically Bitcoin. It should come as no surprise, then, that Nano prices have more than doubled in the past weeks, no doubt influenced by Tesla’s high-profile eco announcement. The environmental impact of utilising nano is considerably less than that of using Bitcoin.

Could Chia Be a Viable Alternative?

Nano isn’t the only option in terms of environmentally sound Bitcoin alternatives. Chia is a newly launched cryptocurrency that is widely considered to be one of the hottest new coins that you can mine right now. The reasons for its appeal are that you don’t need a high-powered GPU in order to mine this coin independently. Whilst Chia in itself is relatively unknown, it was created by Bram Cohen, who has a proven track record as the creator of BitTorrent. What’s more, the mining process utilises the tried and tested proof-of-work formula which makes it a relatively simple switch for those miners that are used to working within the Bitcoin frame. Effectively, you will use the storage space on your own computer to both create your own mines of cryptographic numbers and to then “farm” them.  It is a straightforward process, although mining too intensively could cause entry level standard SSDs to burn out reasonably quickly.

Tesla’s decision to stop accepting Bitcoin as a payment method for their vehicles saw shares in the cryptocurrency to drop in value by more than 13%, but it is not thought that, ultimately, this will have any long-term impact on the popularity of this enduring cryptocurrency. However, there are alternative options available if the environmental impact of the currency you use is one of your foremost concerns.

altcoins bitcoin cryptocurrencies eco-friendly
The opinions and assessments expressed in the text are the views of the author of the article and may not represent the position of Cryptogeek. Do not forget that investing in cryptocurrencies and trading on the exchange is associated with risk. Before making decisions, be sure to do your own research on the market and the products you are interested in.