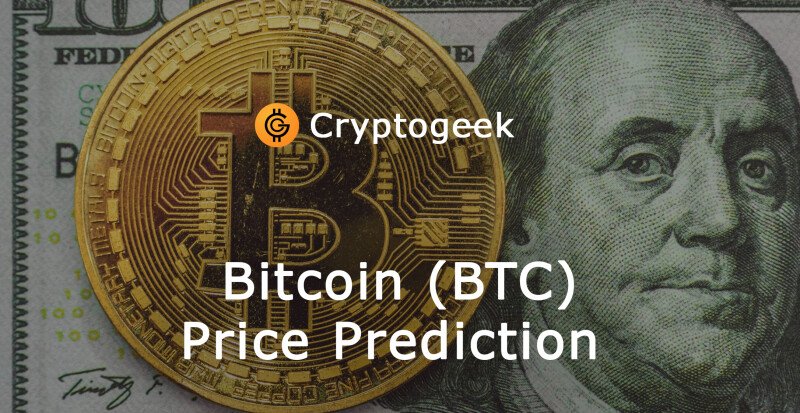 With cryptocurrency being the all-new talk of the town, more and more people are now getting into the hype. With this being said, a lot of people have shifted their focus and are now working on owning cryptocurrencies. Considering that cryptocurrencies tend to bring in higher profits, everyone is now hoping to indulge in the world of these new digital assets.

For one, Bitcoin has continued to surprise people and has challenged every one of its critics yearly ever since it was introduced. Starting from less than $0.01 per coin, the coin went on to be valued at more than $68,000.

Nonetheless, what most people ponder is whether it’s still worth investing in Bitcoin. The answer to that may be tricky. However, the price of the coin is expected to grow in the future, considering that it’s the biggest cryptocurrency out there.

Keep reading as we go over the Bitcoin price prediction for the upcoming years.

Bitcoin is undoubtedly the hottest cryptocurrency out there, but it wasn’t always like this. Bitcoin, founded by its creator Satoshi Nakamoto in 2008, was a struggling currency that opted for a decentralized system on a public ledger known as blockchain. It was a currency that focused on being received and sent by individuals without the use of intermediaries.

This meant that Bitcoin called for transactions to be made much quicker, without any government intervention. The coin went on to gain notable support from people after its true significance was realized and taken into account. Since the coin was introduced, it has grown in value by upwards of 8,000,000%, making it one of the most beneficial investments of all time for early adopters. 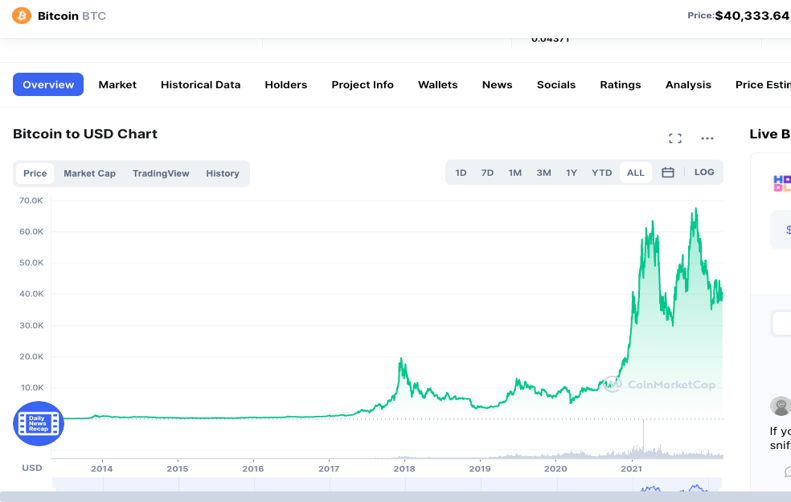 Moreover, Bitcoin has now grown to be admired on a global basis. For instance, Bitcoin now works as legal tender in most countries and can even be converted to cash through numerous applications or Bitcoin ATMs. Only the future can foretell how far Bitcoin will go, though. 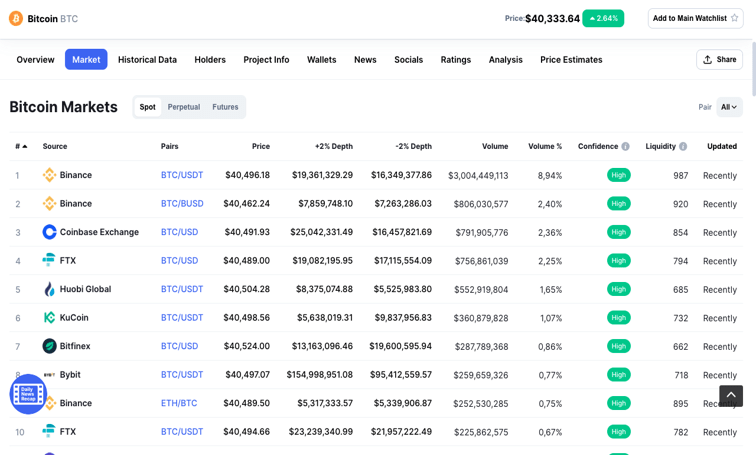 Bitcoin Coin Prediction for the Years to Come

As of March 15, 2022, Bitcoin currently costs around $38,879 per coin. This price is expected to rise by the end of the year; however, this isn’t confirmed. Considering that cryptocurrencies are incredibly volatile and may lose more than 50 percent of their value, an investment in coins such as Bitcoin should be taken cautiously.

It’s important to note that the BTC Price Prediction is made on different analyses and may vary completely, owing to which investments must be made on individual risk, utilizing amounts that you may be comfortable losing.

With the price of the year expected to be around $1460 towards the start of the year, experts believe that the price of Bitcoin will reach newer heights in 2023 and keep moving forward. As seen from CoinPriceForecast, the price of a single Bitcoin is expected to rise to $73,715, which is an ROI (return on investment) of around 100%.

Even so, these are just estimates, meaning these amounts are based on a set of different analyses and might not be completely accurate.

As for the year 2027, Bitcoin may become more valuable, with its value reaching $134,776 with an ROI of 272%, as seen from CoinPriceForecast. The reason for this is the increase in applications for Bitcoin. As of now, Bitcoin is still limited, as seen from its usage. However, things are expected to change in the years to come.

As for the year 2030, things are expected to remain consistent. With Bitcoin now being used as El Salvador’s legal tender, more countries are expected to follow suit. With this being said, the price of a single Bitcoin may grow to an ROI of 341%. This means that a $1,000 investment made in the year 2022 in March would grow to upwards of $4,410 by 2030.

Bitcoin Crypto Price Analysis for the Past Several Years

Bitcoin has seen fluctuating changes ever since it was introduced. Losing over half its value time and time again, the coin has grown to have a market cap of more than $700 billion by 2022. Even so, the reign of Bitcoin is far from over.

The price of Bitcoin has seen numerous changes due to lack of regulations, support from the community, and luck, alongside other factors. Even as of March 15, 2022, the coin has lost around 40 percent of its value but is still expected to make a comeback near the end of the year.

The price analysis for Bitcoin starting from its emergence has been listed and or discussed below: 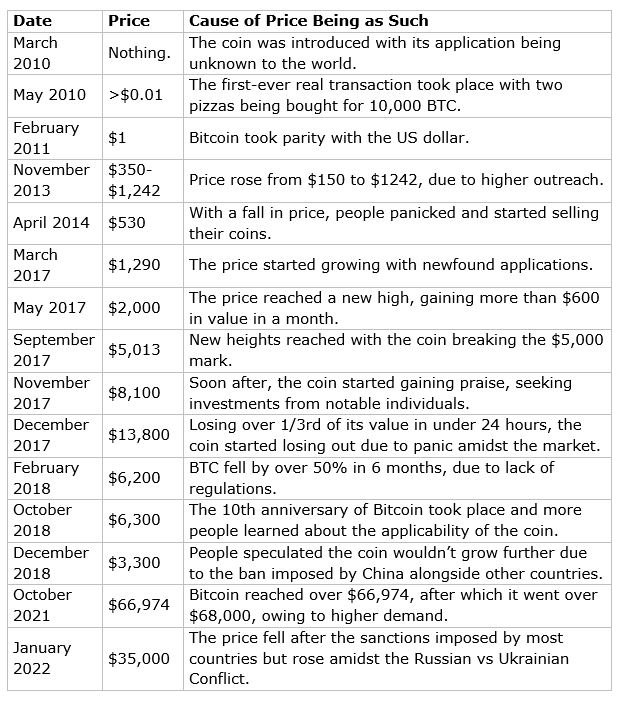 Is Bitcoin a Good Investment?

Cryptocurrencies may be tricky. However, Bitcoin’s prices aren’t as volatile as the majority of Altcoins, making it a decent investment.

What Will the Price of Bitcoin Be in 10 Years?

Should You Buy Bitcoin Now?

Although risky, Bitcoin is down 40% of its value in March 2022, making it a decent investment.

Provided that you buy it from a registered source, Bitcoin may be deemed safe.

Yes, Bitcoin is also being used as the legal tender for El Salvador and is legal in most countries out there.

How Much Has Bitcoin Grown Over the Years?

Since its start, Bitcoin has seen an increase of more than 8,000,000 percent.

Taking BTC’s history and fundamentals into consideration, an investment made in Bitcoin may prove to be worthwhile but must be made with caution to minimize the risks of investing. As always, DYOR.

14 Answers To The Question: How to get your first Bitcoin? https://cryptogeek.info/en/blog/14-answers-to-the-question-how-to-get-your-first-bitcoin

Are you looking for the best way to convert BTC into cash? Here’s your go-to guide. 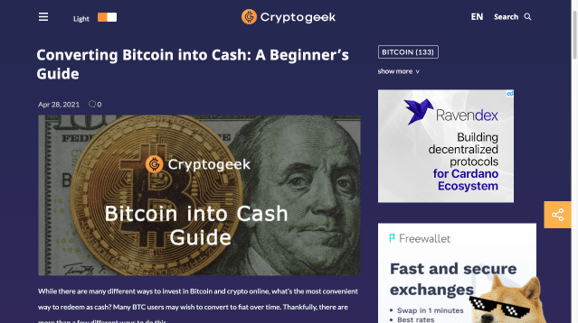 If you’d like to know more about the best BTC wallet out there, check this article out! 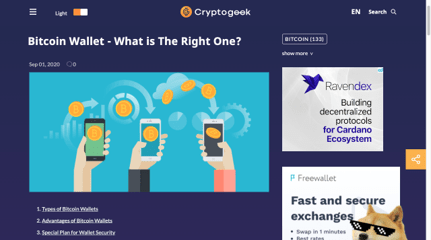 Carlos Sales
22 July 2022
Great to know the facts and history. Thanks
Steven
30 December 2021
Really awesome article, kudos to the editorial team!!!
Santiago
14 November 2021
Amazing website. We would love for you to visit our website. Stay updated on the latest crypto news https://cryptomoonpicks.com
Emma
3 September 2021
Great predictions! This is a very great project,compared to others who are just focusing to compete with btc.I'm gonna support this.Good luck team keep it up.
James
22 July 2021
Great article, good research. Would to hear about any promising upcoming DeFi ICO project. I personally like Gain Protocol, the team is rather small, but experienced. Their vision is based on a modern approach that can easily find its place on the market after the ICO is over
Sam Loid
22 May 2021
good article
Rishabh
16 April 2021
Shiftal P2P crypto exchange is an exchange platform that allows users to buy/sell cryptocurrencies directly from/to each other, without needing an intermediary to process, verify or approve the transaction. Such exchanges are more secure and usually have a lower trade fee compared to regular crypto exchanges.
Weeg
6 February 2021
The BTC is like rollercoaster. Up and down
Oleg
6 October 2020
Thx for the prediction, it's really accurate
bitcoin (171) crypto (169) blockchain (110) cryptocurrency (105) cryptocurrencies (99) trading (80) btc (76) guide (67) altcoins (66) cryptocurrency market (65) cryptocurrency exchange (59) ethereum (56) binance (46) coinbase (34) hitbtc (34) price prediction (32) prediction (31) freewallet (29) price (27) mining (26)