Bitcoin's Mission - The Role of the Crisis of 2008 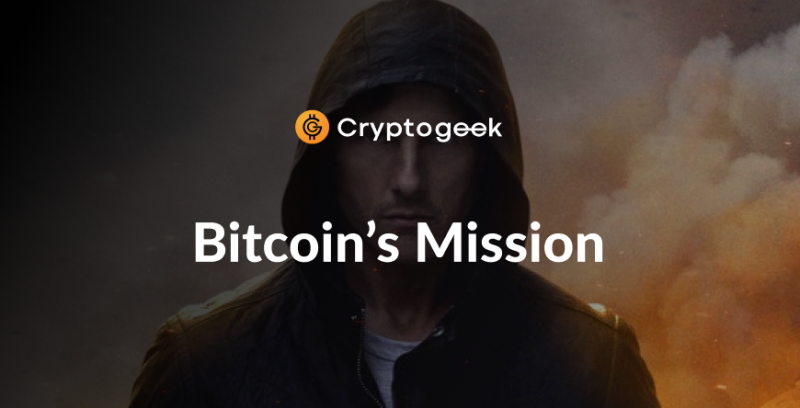 It's too early to say that Bitcoin is something that everyone understands clearly. Mass adoption of Bitcoin is also yet to happen. Nevertheless, there is no mistake in saying that Bitcoin became a bright international sensation that provoked many people (big businessmen and developers among them) to revisit the current monetary system and look for brand new solutions to the old problems. Bitcoin has made a long way from a project created within a narrow cypherpunk community to the headlines of the world's biggest publications and establishment of new laws. Why did it happen? Was it necessary or inevitable? Did it fulfill its initial purpose?

It is widely considered that Bitcoin was invented in response to the world economic crisis of 2008 (the Bitcoin whitepaper was written the same year, and the genesis block appeared in January of 2009). If we take a look at functions that make Bitcoin different from fiat currency we might think that this assumption is realistic: Bitcoin is deflationary, it can't be controlled by any authority, the ledger is transparent and the transactions are anonymous. Bitcoin knows no boundaries.

Yes, all these characteristics make Bitcoin a powerful outcome of the crisis of 2008, but we should admit that the cypherpunk community had been working on digital currencies with similar characteristics for years before the crisis. Was Bitcoin a child of these efforts? We don't know. Most probably the recent crisis played a different role for Bitcoin — a crisis triggered some people to rather trust Bitcoin than the conventional financial system because " real money" proved itself to be unreliable.

According to the alleged creator Satoshi Nakamoto (who is yet to be identified), Bitcoin is “a purely peer-to-peer version of electronic cash would allow online payments to be sent directly from one party to another without going through a financial institution.” The governments make all payment means that is different from fiat money (for which read "US dollar and its local avatars") illegal. Bitcoin appeared to be the most successful project to question this status quo.

The first transaction took place in January 2009 when Satoshi Nakamoto sent 10 BTC to Hal Finney, a person who was working on anonymous digital currencies for several years prior to the Bitcoin inception. For a long time, people aware of Bitcoin were using it just for fun, rewarding each other for posts on forums, etc. On May 22, 2010, Laszlo Hanyecz bought 2 pizzas paying 10,000 BTC for them. This purchase is considered to be the first real purchase made in Bitcoin. In other words, we can say that it was the first documented fact of someone (pizza shop) recognizing the value of Bitcoin.

In the following years, a huge circulation of Bitcoin was associated with the Silk Road, the website where people could sell and buy anything they wanted to, using Tor and Bitcoins to keep anonymity. Despite the efforts to conceal the facts of illegal trade, the FBI shut this site down and confiscated over 144k BTC belonging to the Silk Road founder Ross Ulbricht. It happened in 2013.

The next year the online exchange Mt. Gox that provided the opportunity to trade Bitcoins announced its bankruptcy that followed the hack of the Mt. Gox website. People couldn't withdraw their Bitcoins from Mt. Gox for a long time and faced the same problems as the victims of the traditional banking system while the Silk Road case shows that Bitcoin cannot exist fully independent from the government. That was the time of disappointments if we speak of the original Bitcoin purpose.

By that time, new types of people started paying attention to a new phenomenon in the world of currencies: tech and business giants and a new generation of digital businesses joined the so-called blockchain revolution. Since December 2014 Microsoft started taking payments in Bitcoin. In 2015 Bitcoin appeared on the cover of The Economist. Many Bitcoin forks were created by this time, but what is more important is the launch of the Ethereum project — the first serious alternative to Bitcoin with a wider functionality.

What is special about Ethereum when we speak of Bitcoin? It was the shift of focus from Bitcoin as a currency to blockchain technology itself because Ethereum was the first project to use blockchain innovatively since the moment when it was introduced by Bitcoin.

Decentralized applications (Dapps) and smart contracts (both technologies were offered by Ethereum) gradually became two important innovations associated with blockchain. Smart contracts are meant to replace lawyers with code when parties come to an agreement and Dapps are applications that are not controlled by any single authority. It is a natural development of the initial idea behind Bitcoin to remove the middlemen and institutions.

In 2017 the governments started to regulate and tax cryptocurrencies some of which were regarded as securities in the US. After the incredible Bitcoin rally of the late 2017 many big companies revealed their intentions to implement cryptocurrencies or other blockchain-based solutions in their products. At the very same moment, many people disappointed by the cryptomarket decline went on to call Bitcoin a bubble or a scam.

These allegations were ridiculously simplistic as there are too many powers now involved in Bitcoin, and some scam projects really are on the spot, but they are not Bitcoin itself. Bubbles do not mean too much too, because tulips are still the thing (remember the Tulip bubble), the Internet is still the thing (remember the Dotcom bubble), and Bitcoin is not going anywhere soon.

Bitcoin became a strange slightly uncommon organ in the body of the new economy. The authorities in many countries are doing what they can to deprive Bitcoin of its anarchic potential and turn it into a predictable commodity. Institutional investors are believed to be the biggest Bitcoin traders, so currently, the goal of Bitcoin is more distant than ever. But it's not a good reason to sigh and shed tears because probably the history is not going to end today, and only the future will show if cryptocurrencies are capable of improving the monetary system that betrayed its creator (humanity) so many times. There's no doubt that blockchain technology is going to change many spheres of our lives for the better.

Jul 30, 2022 1
bitcoin trading ethereum cryptocurrencies decentralization cryptocurrency market basics distributed ledger technology smart contracts
The opinions and assessments expressed in the text are the views of the author of the article and may not represent the position of Cryptogeek. Do not forget that investing in cryptocurrencies and trading on the exchange is associated with risk. Before making decisions, be sure to do your own research on the market and the products you are interested in.