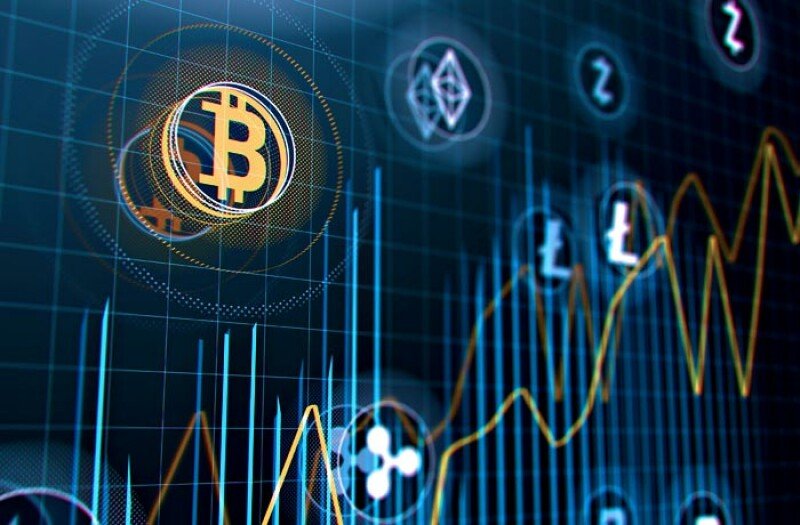 Since the advent of the original digital currency Bitcoin in 2009, the crypto market has notably rushed forward. Over the past decade, the industry has been enriched by a large number of services enabling the storage and exchange of multiple digital assets in accordance with the demand from the community.

But with all the diversity of choice, finding your personal favorite might be really challenging. This time I’ve decided to collect 10 reputable and well-established crypto wallets and check their transaction speeds, rates, and actual amounts received after making the exchange. In this article, I’ve described my own user experience and summarized the results of the trial-trip to identify the industry leaders. So let's see how that turned out!

Atomic Wallet is a desktop application that provides users with full control over their cryptocurrency savings, as private keys and transactional data are stored on users' computers instead of the provider's servers. Atomic wallet is compatible with Windows, Mac OS, Ubuntu, Fedora, and Debian operating systems that make it easy to use on a variety of devices. 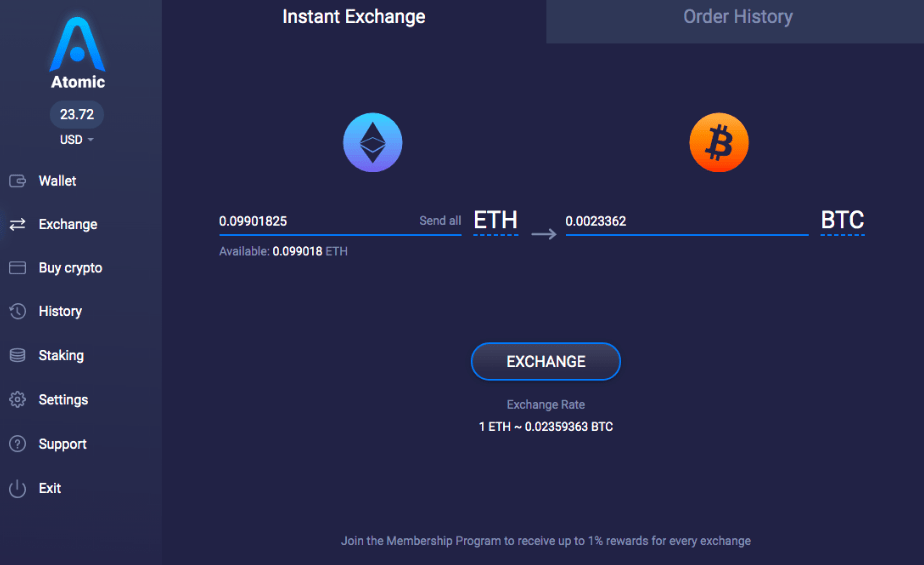 Within the Atomic wallet, it took 14 minutes to complete the exchange of my 0.1 ETH to BTC. I was pleased with a quite convenient and intuitive web interface that made the process very smooth. After the exchange was over, I received the sum that was equal to the amount promised by the wallet provider in accordance with the given rate.

Jaxx is a digital wallet that allows users to send and receive multiple cryptocurrencies, and also gives you a safe place to store them. It was created in 2014 by Anthony Diorio, who is also known as a co-founder of Ethereum. Jaxx is considered to be one of the most reputable and trustworthy software wallets in the cryptocurrency space and can be downloaded on most device types. 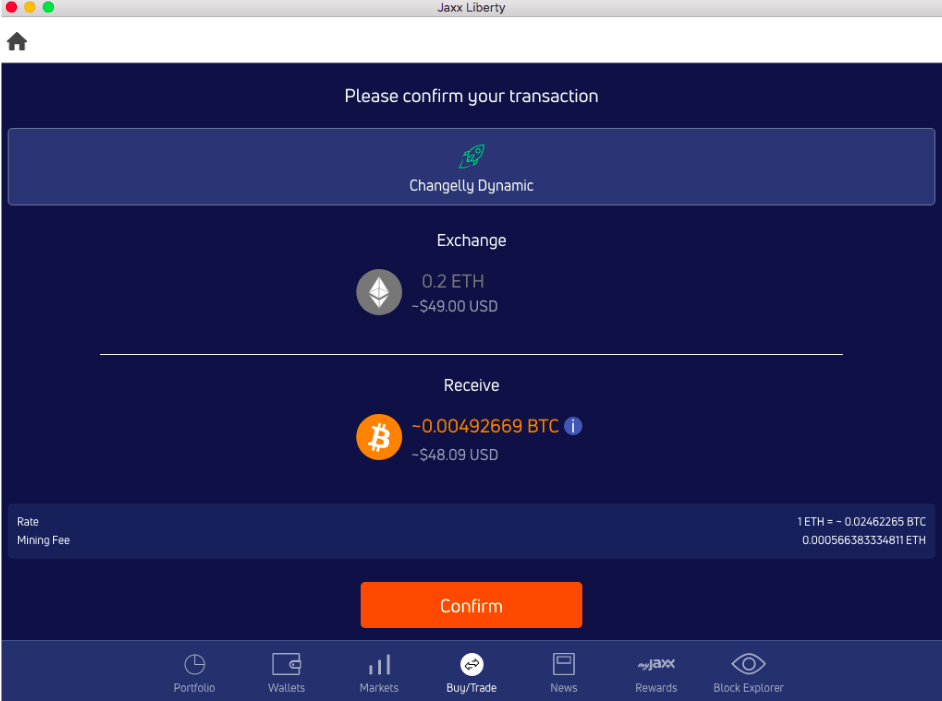 Within the Jaxx wallet, I decided to convert 0.2 ETH to BTC, which took 10 minutes more than that within the Atomic Wallet. Moreover, I faced some problems with the balance display, so I had to re-enter the wallet from another device using the seed phrase in order to solve the issue. After completing the exchange, I received the sum that was 7% lower compared to the amount I expected from the wallet provider in accordance with the given rate.

Coinomi is one of the most reliable and secure free desktop and mobile multi-currency wallets that can store over half a thousand coins. Users’ private keys are kept on their phones or PCs, and the wallet itself is protected with a password with the possibility to generate a handy password recovery phrase if the device is lost. Since 2018, it has been available for both Android and iOS operating systems. 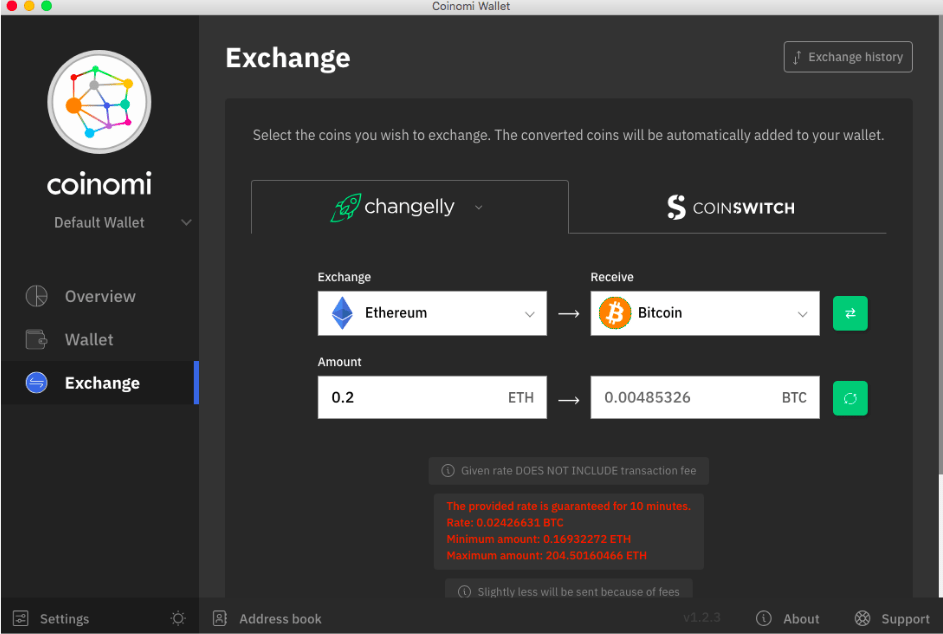 Within the Coinomi wallet, I made an exchange of 0.2 ETH to BTC, and it took 21 minutes to complete the exchange. I was offered two options before making the swap: Changelly and Coinswitch. I chose the former since the rate was more profitable at the time of the experiment. As soon as the exchange was over, I received the sum that was 5% lower compared to the amount unsured by the wallet provider in accordance with the given rate.

Freewallet is a digital wallet available on iOS and Android. It is designed to store and manage over a hundred cryptocurrency assets that can be purchased via credit card. Freewallet is one of the few wallets that launched full-fledged mobile applications for single cryptocurrencies and provided the ability to integrate with cold storage. It also has a built-in quick sharing feature as well as fee-free transactions within the wallet’s ecosystem. The set of Freewallet’s security features also includes PIN codes, multisig, two-factor authentication, and fingertips. 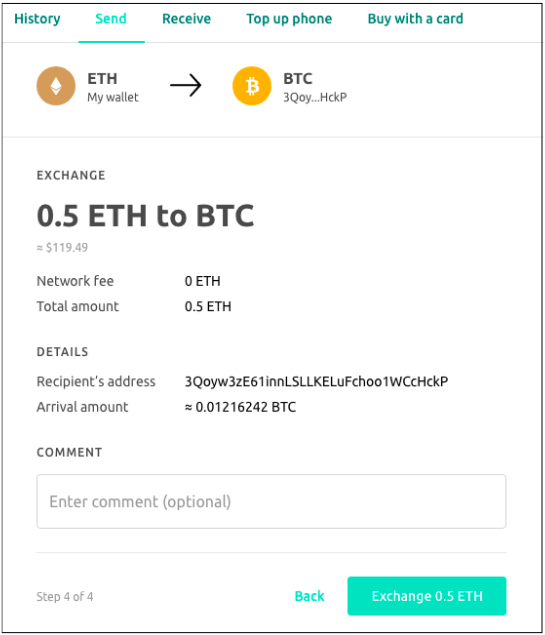 Within the Freewallet, I swapped 0.5 ETH to BTC, and wow - just 1 minute, and my funds are already displayed on the account balance. However, as soon as the exchange was completed, I received the sum that was a bit lower compared to the amount I was promised to get from the wallet provider in accordance with the given rate.

Exodus is a multi-currency wallet that supports many tokens with the possibility of exchanging them directly in the application. Unlike most similar solutions, the interface of this wallet is so simple and understandable that even beginners in the cryptocurrency field can use it. The desktop application is designed to be installed on devices running on the following operating systems: Windows, MacOS and Linux. In 2019, a mobile application for Android and iOS was released. By 2020, Exodus supports 100+ cryptocurrencies and tokens. 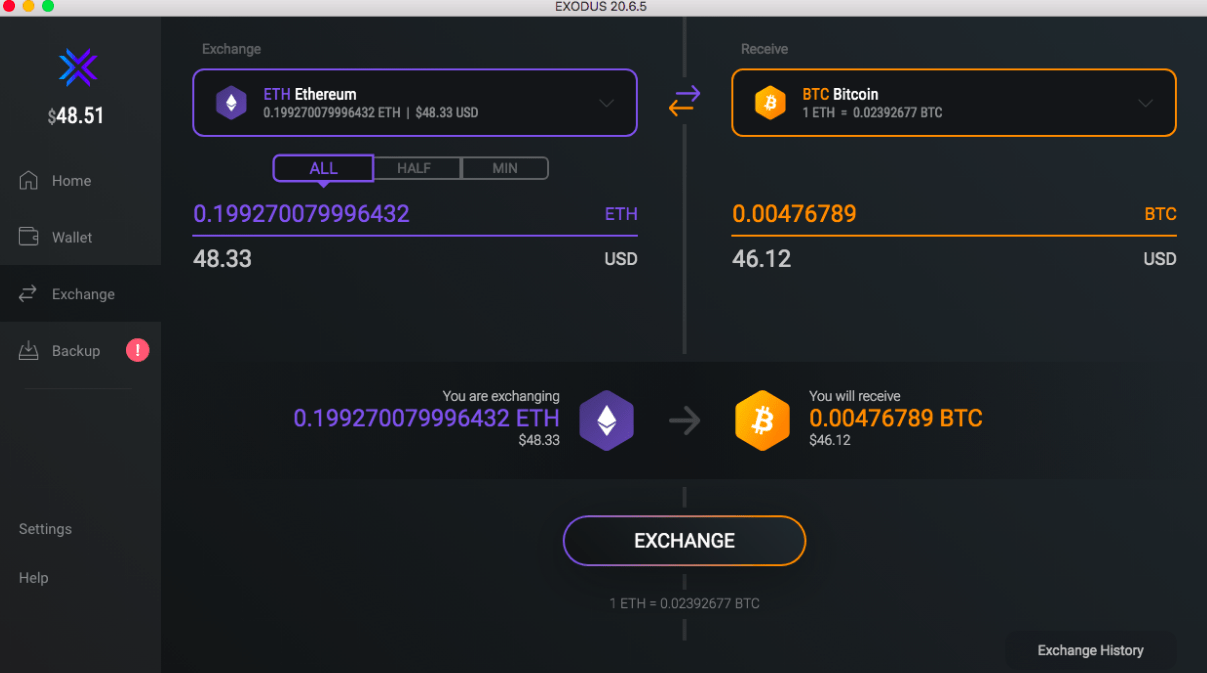 Within the Exodus wallet, I spent 26 minutes to complete the exchange of 0.2 ETH to BTC. During the exchange, no problems were faced; the interface is very clear and practical. A very clear interface has proved to be rather practical and lag-free. Besides, I received exactly the same amount of BTC that was guaranteed by the wallet provider in accordance with the given rate.

Guarda is a multi-cryptocurrency wallet that allows users to manage their assets from any device (desktop, laptop, tablet or smartphone) connected to the Internet. The web wallet is compatible with any device running on Windows, Linux or MacOS, and the mobile app is available for Android and iOS. The wallet has a built-in function of purchasing cryptocurrency with a bank card provided by Simplex. In addition, Guarda’s own cryptocurrency exchange allows users to quickly convert cryptocurrencies within the wallet without any restrictions. 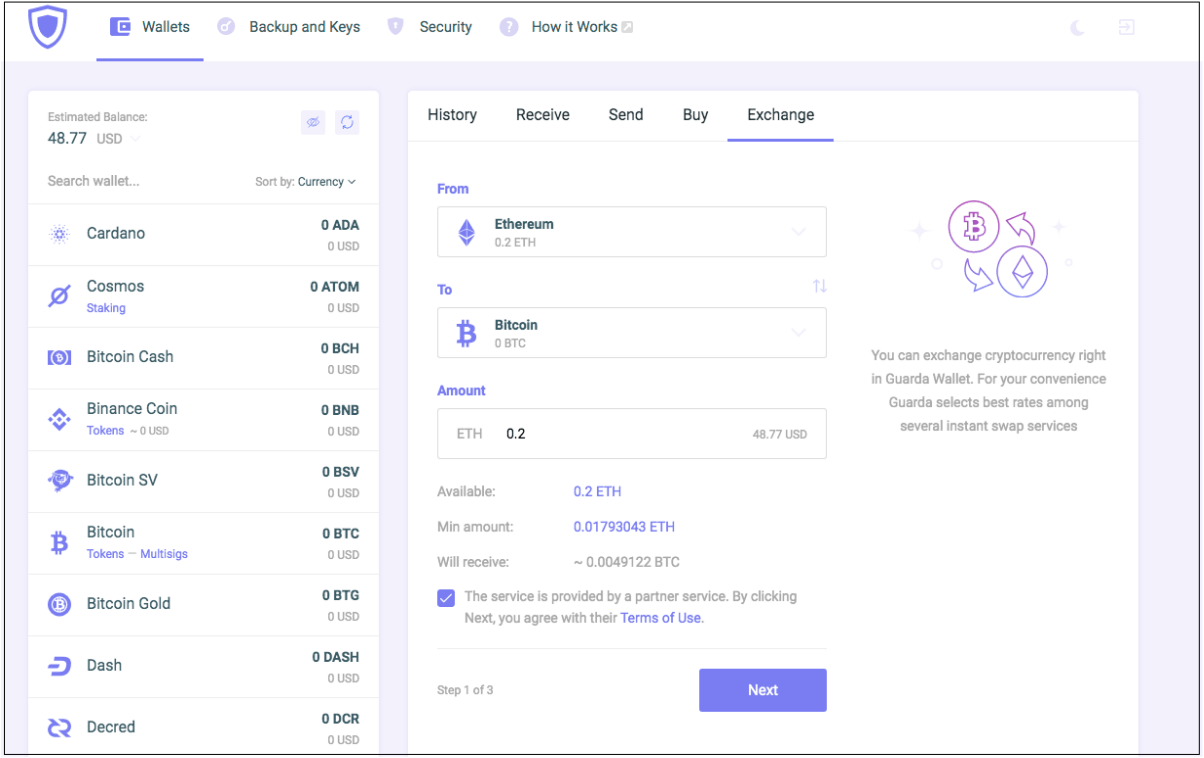 Within the Guarda wallet, the exchange of 0.2 ETH to BTC took 19 minutes. Through my user experience, the wallet itself is pretty convenient and meets high-quality standards. After the swap was made, I received the sum that was 3% lower than the amount I expected to get in accordance with the rate given.

Edge Wallet is the multi-currency mobile wallet that allows users to manually add ERC-20 tokens that are not available by default. It has a variety of in-app options like buying, spending, and exchanging cryptocurrencies. The wallet also supports the Segregated Witness (SegWit) protocol - both for bitcoin and Litecoin. No user data or personal information is transferred to the company’s services. The mobile versions of Edge can be downloaded on iOS and Android devices. 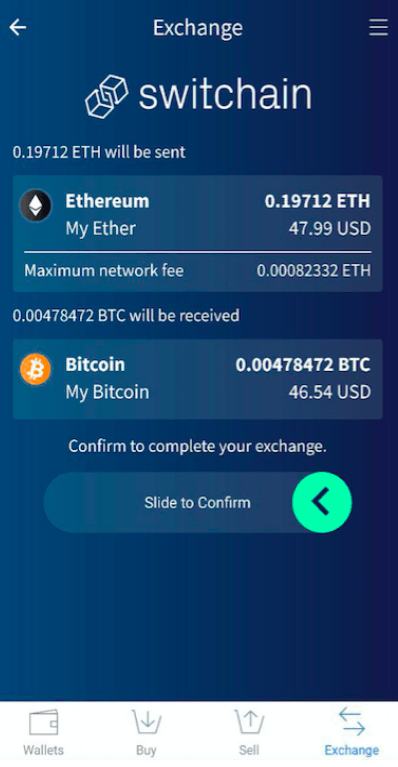 Within the Edge wallet, the process of converting my 0.2 ETH to BTC was as fast as within Freewallet, which is impressive indeed. The exchange occurred instantly, and after I clicked the “Confirm" button, there were no waiting windows. On top of that, I got my promised Bitcoins on the balance in accordance with the given rate.

Huobi Wallet is a convenient and secure multi-currency wallet that is available for smartphones running on iOS and Android. Currently, it supports more than a hundred digital assets, including the recently added EOS and TRX and the rest of available ERC20 tokens. In addition to storing cryptocurrencies, the wallet also enables an internal exchange function between them and empowers users with digital asset management services. 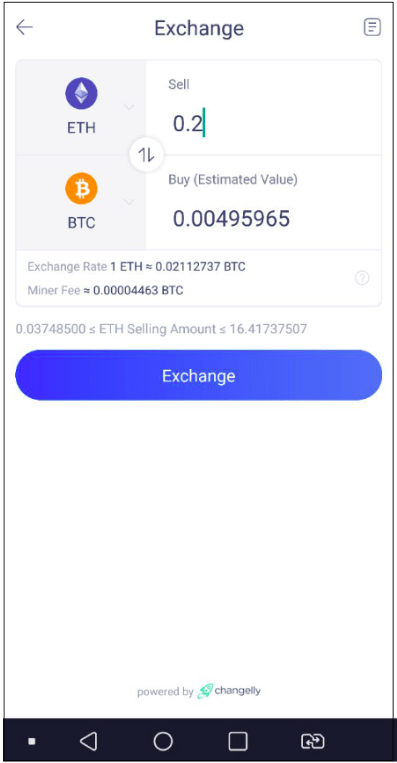 Within the Huobi wallet, I’ve been waiting for 28 minutes to swap 0.2 ETH to BTC. The only concern occurred during my test-drive was related to the exchange function that is not presented here in a clear manner, so I’d say that this wallet isn’t targeted at beginners. The sum I eventually received was 7% lower compared to the amount ensured by the wallet provider in accordance with the given rate.

Enjin Wallet is an application from the Enjin platform, which is intended for executing game tokens transactions. Except for giving you an opportunity to send and accept coins like all the other crypto wallets, Enjin Wallet allows you to use them on Engin, the largest online gaming platform, which has been functioning since 2009 and offers more than 250,000 game projects. The service is available for iOS and Android systems and supports the built-in crypto exchange. 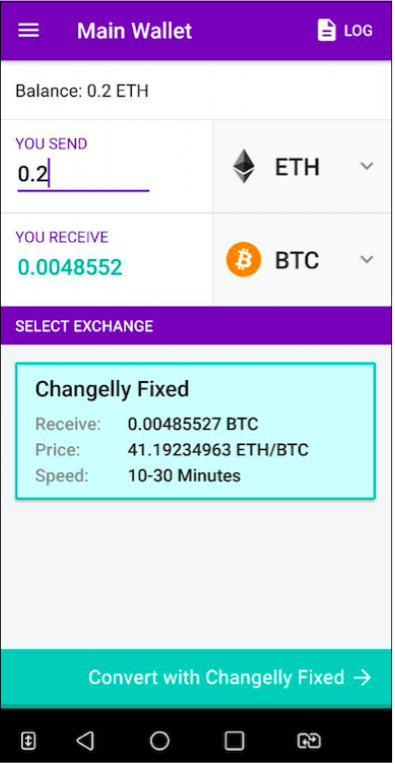 Within the Enjin wallet, it was the longest exchange execution time, so I had to wait for over half an hour to convert 0.2 ETH to BTC. Well, at least using the wallet’s interface brought me no troubles, and finally, I received the sum that was almost equal to the amount promised by the wallet provider in accordance with the given rate.

Infinito Wallet is the first multicurrency mobile wallet to store a large number of cryptocurrencies, including ERC-20, NEP-5 protocol tokens, as well as EOS tokens. The application was developed by the UK-located Infinity Blockchain Labs. Just like every aforementioned wallet, Infinito has added the internal exchange function to provide users with much comfort through a very transparent and intuitive interface. At present the service is supported only by mobile devices and can be downloaded from both AppStore and in Google Play. 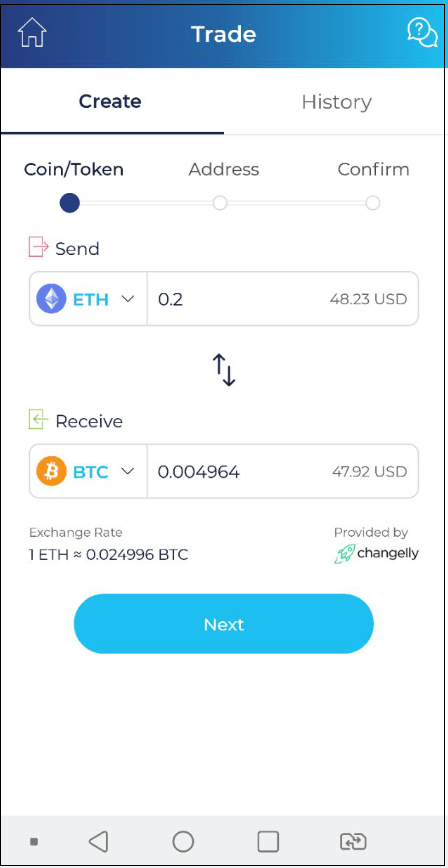 Within the Infinito wallet, I exchanged 0.2 ETH to BTC, and the transaction was successfully over in 23 minutes with the amount of Bitcoins being 7% lower than that guaranteed by the wallet provider in accordance with the given rate.

The swaps in this article were made at random days and random hours, so the rates at the time of writing may be different from those being available during the period of my experiment. Below you can find the final data gathered together in a table to give you a visual representation of indicators I’ve tested.

As you can see with more than half of our competing wallets exchanges take over 20 minutes to be executed and lead to money losses that may vary between 3% and 7%. The two only exceptions are Exodus and Enjin, thus, if you’re patient enough to wait for around half an hour, you will be rewarded with exactly the same funds you were promised to receive.

The most profitable exchange rates are offered by Infinito and Jaxx, but as a result, you get an amount of crypto that is significantly lower than that you were initially proposed. So be careful and do comparative research to see whether the actual amount can be as beneficial as you expect it to be.

The unquestionable champions in terms of transaction speed are Freewallet and Edge. Yes, their exchange rates are slightly lower than those valid for the majority of presented wallets, but the money losses are either minimal or absent at all. So, for 2020 both these solutions seem to be really appealing for your everyday usage with Freewallet probably outstanding its competitor with free transactions between Freewallet’s customers and a solid security toolkit providing you with a safe experience.

Anyway, the choice is up to you and depends on your comfort with the technology and main goals. Consider your status as a crypto enthusiast, beginner or advanced user as well to have a better understanding of what features you need to focus on to make your activity with a crypto wallet as pleasant as possible. And, of course, check reviews on how different crypto wallets work to define the one that’s right for you. 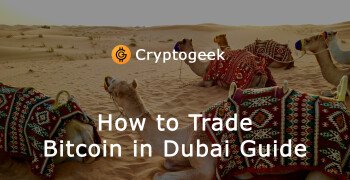 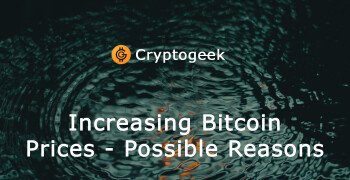 May 17, 2022 0
altcoins cryptocurrency exchange bitcoin trading cryptocurrency wallets guide jaxx cryptocurrencies list atomic wallet
The opinions and assessments expressed in the text are the views of the author of the article and may not represent the position of Cryptogeek. Do not forget that investing in cryptocurrencies and trading on the exchange is associated with risk. Before making decisions, be sure to do your own research on the market and the products you are interested in.