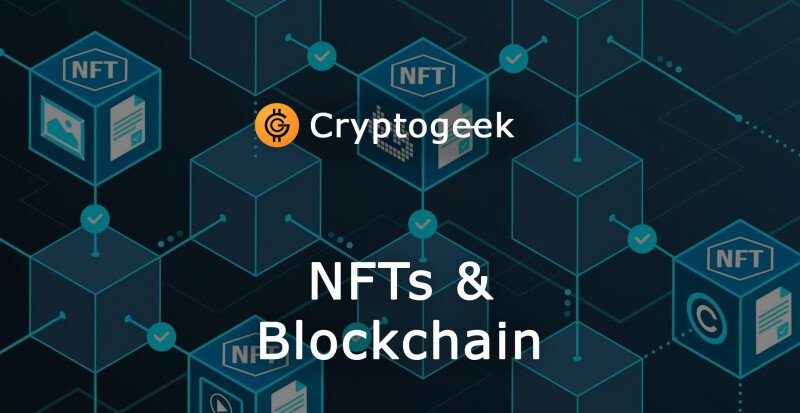 Non-Fungible tokens provide a fresh way to engage with the media, sports, the arts, music, and more. NFTs demonstrate how blockchain technology has the potential to transform society in ways that go well beyond the financial sector. They offer a novel method to engage with popular culture, music, sports, and the media, which has piqued the interest of people all over the world. The numerous headlines about them over the previous few months have made this quite evident.

This article will define NFTs, describe how they operate, discuss the origins of the NFT boom, and discuss how blockchain development services have enabled NFTs to establish a new economic sector.

Why is there such a Buzz about NFTs?

Almost everyone enjoys music, art, games, and the internet, which is why NFTs are so fascinating and enjoyable to discuss. On every social media platform, people who have never been interested in cryptocurrencies or decentralised finance enthusiastically discuss non fungible tokens. Many well-known people and memes endorsed NFTs in the first half of 2021.

The Former CEO of Twitter, Jack Dorsey, sold his first tweet as an NFT for an astounding sum of more than $2.9 million just last March. The price of Edward Snowden's NFT, a self-portrait, was around $5.4 million (2,224 Ether).

The Zo Roth meme's NFT was sold as an NFT for 180 ETH, or roughly $500,000. Zo Roth is best known as "Disaster Girl" because of the 2005 meme in which she is seen sneering at the camera while a house is on fire in the backdrop.

Additionally, companies in the conventional sector have chosen to follow the NFT trend. As an illustration, the first NFT collection of Havaianas was recently sold at auction in Brazil.

The volume of NFT transactions has increased more than 25 times since December 2020. This is due to the widespread use of NFTs. It can be one of your favorite songs, a superhero television show, or a game accessory that your kids crave. The following graph makes it simple to understand how the volume of business and the number of NFT transactions have increased over the past six months and since the end of the third quarter, prior to the latest increase.

What do NFTs mean? How do they function?

An NFT is a digital representation of a non-fungible physical asset or a piece of software code that confirms the characteristics of a non-fungible digital asset. For those who prefer a more in-depth examination of the issues:

"An NFT is a pattern of smart contracts that makes it simple to determine who owns an NFT and how to "transfer" non-fungible digital assets in a standard way," according to the definition of the term.

An NFT in this situation can be based on any non-fungible asset, such as a domain name, a ticket to an event, virtual currency in a game, or even a username on a social media platform like Twitter or Facebook. All of these non-swappable digital items could be NFTs.

To link metadata files that can be fixed in an image or file, an NFT contains a data structure called a "token" that is used. To suit the requirements of blockchain development networks like Ethereum, Kusama, and Flow, among others, this token gets transferred around and modified. A metadata file is created in the token's data structure when the art file is submitted to a blockchain network.

Your NFT is then given a cryptographic hash, which serves as a key. On the blockchain network, there is a record that contains the date and time that cannot be altered. Artists must make sure they retain track of crucial information and double-check that nothing has changed.

You might be able to tell more clearly when the information of the art file was tokenized when you load your art on-chain. No one can retrieve or remove the artwork's data because it has been uploaded. A blockchain registration for your NFT almost eliminates the possibility of your artwork disappearing.

How has Blockchain Technology Improved the Utility of NFTs?

Traditional NFTs had no digital representations prior to 2008. Therefore, because they weren't standardized, the NFT marketplaces collapsed and were only available on platforms that produced and issued a certain NFT.

The first NFTs in a blockchain were coloured coins when they were added to Bitcoin's network. Despite the fact that they were created to facilitate Bitcoin transactions, their scripting language also retains a tiny bit of metadata on the blockchain. This metadata can be used to represent asset management directives.

On the other hand, Larva Labs' CryptoPunks was the first NFT test that used the Ethereum blockchain. 10,000 collectible, "unique," punks composed the group. The fact that the trolls "live" on the Ethereum network allows them to interact with digital wallets and marketplaces.

NFTs became well-known on the Ethereum blockchain in 2017 thanks to CryptoKitties, a platform that allowed users to create digital cats and breed them with various pedigrees. The endeavor to develop a sophisticated system of incentives was unique. It was discovered that NFTs might be employed as a means of persuasion. This spurred interest in auction contracts, which have recently emerged as a key method for determining price and purchasing NFTs.

The good thing about enhancing NFTs with blockchain technology is that it has greatly increased their advantages and prospects. The representation of digital assets that cannot be replicated has been standardized thanks to the ERC-721 standard. The Ethereum blockchain uses a template for smart contracts called ERC-721 that is comparable to the ERC-115 and ERC-998 standards. It offers a standard means to "transfer" non-fungible digital assets as well as a standard mechanism to determine who owns an NFT.

Even though Ethereum is where much of the action is right now, it's crucial to remember that a few NFT patterns are beginning to appear on other blockchains. For instance, the Mythical Games project dGoods is focused on creating a cross-chain standard using the EOS blockchain. The first NFT standard created by TRON, TRC-721, was also made public in late December 2020. With this standard in place, the Chinese blockchain should be able to use more DLT-based applications and compete with Ethereum's expanding NFT market.

Since then, a blockchain-registered NFT has evolved into a "unique" item that cannot be altered, forged, or spoofed.

What Potential Benefits could Blockchain Technology provide for NFTs?

Standardization is the first advantage of NFTs supported by blockchain technology, as was previously stated. NFTs can now incorporate new features like instructions on how to obtain one thanks to blockchain technology. Along with standardizing the ownership, transfer, and access control aspects of NFTs, this is also important.

Other significant advantages include:

The NFT patterns make interoperability possible. NFTs can now transition across several ecosystems with more ease as a result. Non-fungible coins in a new project can be seen immediately away in a wide variety of wallets. They can also be purchased in many virtual worlds and traded in various markets. This is only possible because blockchain technology enables open patterns that give authorization to read and write data as well as a transparent, trustworthy, consistent, and application programming interface.

On the other hand, interoperability has made it simpler to sell NFTs by enabling unfettered trade in open markets. NFTs built on blockchains allow users to migrate their nonfungible assets outside of their original contexts. They can conduct commerce in any currency, including cryptocurrencies like Bitcoin and Ether as well as stablecoins and particular digital currencies from a particular application, and they include sophisticated bargaining tools like auctions and bids.

Because NFTs built on blockchains may be sold instantly, markets become more liquid and can accommodate a larger spectrum of clients. This greatly increases the exposure of non-fungible assets to a larger pool of potential buyers.

Developers can use smart contracts to offer NFTs long-lasting properties that cannot be altered once they are created and to impose stringent restrictions on the quantity of NFTs that may be created. You can be guaranteed that an NTfs attributes won't change over time because they are recorded in the blockchain. The art market, which is predicated on how uncommon an original item is known to be, finds this to be very interesting.

Being able to programme might be a plus in the market for digital art. Programmability is demonstrated well by Async Art, a platform for negotiating and creating NFTs that enables owners to alter their graphics at any time. Another illustration of programmability is the capacity for a song to alter how it is composed. This implies that the music may sound different each time you listen to it. These two examples can be created by dividing a component into layers called stems. The purchaser of each stem has a few distinct alternatives. As a result, a single Async Music recording could contain a wide variety of unique sound combinations.

Many people are still unaware of the NFT boom's size or how blockchain is altering how we experience the arts. Maybe we ought to go into greater detail about this.

But the issue with NFTs is that blockchain smart contracts can be designed. This implies that the author is always compensated for their work anytime a piece of material is transferred.

Let's imagine that a particular work of content—music, art, a domain name, a photo of Pelé scoring a goal, etc.—is purchased hundreds of times. The creator of the content will thereafter be compensated.

Because content creators won't have to worry about who owns the legal rights to their work if a "partition of income" is incorporated into the NTFs smart contract's code, this might fundamentally alter how copyright and intellectual property operate.

In truth, there is still a long way to go until the markets for nonfungible tokens and blockchain technology can address issues like scalability, marketing infrastructure, and which laws apply to NFTs with decentralised storage. We won't lose sight of the possibility, though, of recording the rights to the digital asset underlying an NFT transaction. This makes it feasible for new businesses and markets to emerge that are managed by the people who provide the content that people enjoy in social and productive hubs rather than by institutions or other traditional trust checks.

blockchain nft
The opinions and assessments expressed in the text are the views of the author of the article and may not represent the position of Cryptogeek. Do not forget that investing in cryptocurrencies and trading on the exchange is associated with risk. Before making decisions, be sure to do your own research on the market and the products you are interested in.