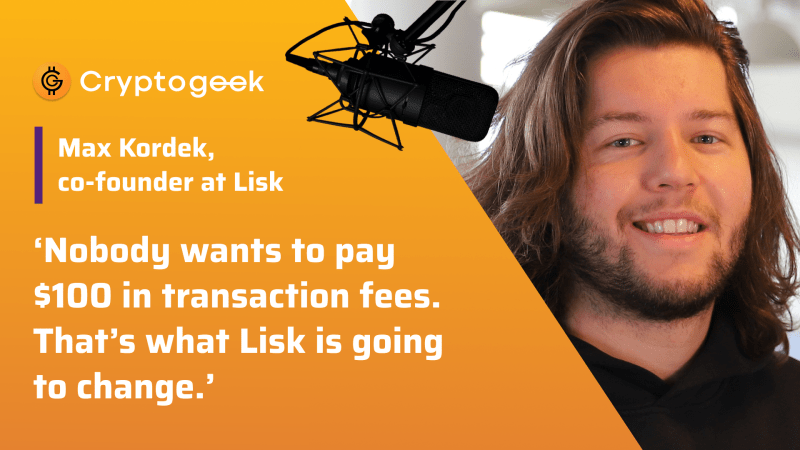 Hello. For those people who may be reading about your project for the first time, tell us what Lisk is as of 2021?

Hey! Lisk is all about making blockchain accessible. For that we have defined two target audiences and focus on two main products.

Developers are our first and main target audience as of 2021 and we are providing them with the Lisk SDK (i.e. Lisk Software Development Kit). A framework and collection of libraries and tools to easily develop blockchain applications in JavaScript.

Tell us in simple words how exactly LSK token as a currency is connected with the blockchain application platform.

Tell us about your recent migration to Lisk Mainnet v3. What are the main related changes?

Lisk v3 was a significant update for us and I assume the biggest blockchain migration ever. Due to the many changes we had to migrate to an entirely new blockchain and couldn’t simply hardfork.

With all these new features and improvements it’s 99% cheaper to send transactions, the network is much more decentralized again, after ~25 minutes transactions can never be reverted again and it’s so much more scalable.

Preparing us well for the Lisk blockchain application platform launch in 2022.

Tell us about the future Lisk v4. What can be expected from it?

Lisk v4 will mark the official launch of the blockchain application platform. With that we can finally start targeting our second defined target audience - users.

You have to imagine before developers were able to build blockchain applications with the Lisk SDK. However, they were never able to deploy it to a platform and grow their user-base. This changes with Lisk v4.

For us it marks the official launch of Lisk.

Developers will be able to register their blockchain applications.

Users will be able to send tokens around the entire platform from blockchain to blockchain, and use the blockchain applications developed.

For now, are there any real-world use cases of the Lisk platform? Have any decentralized applications already been developed with the help of your project?

There is an opinion that at this stage, decentralized applications are a somewhat utopian project. Even if you manage to find a decentralized analogue of Telegram or any other popular app, it will turn out to be an application not suitable for use, with a monstrously inconvenient interface and a bunch of technical problems. Also, many applications only claim to be decentralized, but in fact are only partially decentralized. What do you think about this?

I agree. Looking at Ethereum nobody wants to pay $100 in transaction fees. The developer and user experience is also extremely cumbersome. That’s what Lisk is going to change. With our scalable platform on which every blockchain application runs on its own blockchain, we can facilitate that.

The problem of centralization of network topology and token holders is a big problem. However, we are still in the early stages of blockchain applications and I believe that slowly but steadily we can improve the situation. It’s a process, and the entire industry is work-in-process.

Is there a real need for decentralized applications? Why is creating dApps important?

Yes, let’s just take the example of NFTs. Once the metaverse will be more prominent companies want to sell and people want to hold unique objects in it. We cannot rely on mega-corporations and centralized institutes, we have to build it in a trust-less and decentralized way. Blockchain technology is the way to go here.

Skeptics will say that true decentralization is impossible. A centralized entity and investment is needed to develop, maintain, and promote any convenient service. It's like with representative democracy: most people are not able and not ready to make political decisions, so there is a centralized body that decides for them. What would you say to such skeptical people?

I agree with that statement. Lisk is also founder-led and organized by the Lisk Foundation. However, at one stage these projects once matured can strive for more decentralization. We see that already today with dApps which are of course developed by a centralized entity but once deployed run in the decentralized world, un-interrupted by anyone, some might say unstoppable.

Again, I’d say it’s a process. Give the industry more years to develop itself.

I also think that the metaverse will play a bigger role going forward. Blockchain is the value-layer of the metaverse.

What trends in the field of decentralized applications do you think are most relevant now?

Everything around developer experience is key to on-board the next wave of blockchain developers into the industry. We need easier, better and more powerful tools. That’s where the Lisk SDK comes into play.

Else, it’s all about experimenting and discovering new use-cases for blockchain applications.

How do you see the future of Lisk at this stage? In the long term, how would you like to see your position on the market for example by 2030?

On the 2nd of December 2021 we are hosting AmpliFire, our end of year event. It sparks the beginning of us promoting Lisk to our second target audience - the users. The future for Lisk is bright, we are just launching the platform in 2022 and this is just the beginning. Everyone should tune in to the event because I’ll speak about the ultimate Lisk vision and where we want to stand in the long-run.

Thank you for the interview.

When Max first read about blockchain technology at the end of 2012, he immediately realized its great potential. That was the moment he decided to place all of his focus on crypto leading to co-founding Lisk at the beginning of 2016. Over the years he immersed himself in various crypto communities and soaked up as much knowledge as he could. Today, he is working relentlessly to help the industry gain traction by making blockchain accessible. Outside of work, Max enjoys all things science fiction, especially when entrepreneurs make fiction a reality.

crypto interview lisk
The opinions and assessments expressed in the text are the views of the author of the article and may not represent the position of Cryptogeek. Do not forget that investing in cryptocurrencies and trading on the exchange is associated with risk. Before making decisions, be sure to do your own research on the market and the products you are interested in.