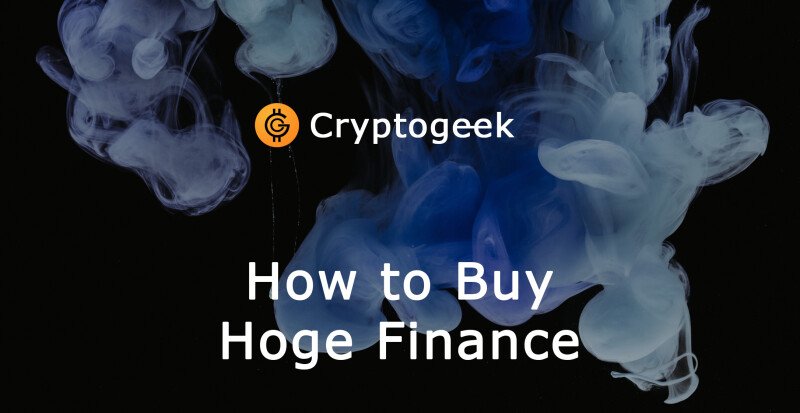 These days, meme coins are very popular. Multiple projects inspired by the success of Dogecoin emerge on the market. Some of them even get to the top of the most popular cryptos. DeFi is a thing, too. In this article, we will talk about the project embracing both trends. Please welcome Hoge – a meme-based DeFi platform and the token of the same name.

What is Hoge Finance (HOGE)?

HOGE is a community–managed DeFi coin with the ability to auto-stack, developed & based on the ERC-20 standard. First launched in February 2021, the first offer totaled 1 trillion tokens, 500 billion of which were burned after the first days of sales.

HOGE is a clone of Dogecoin on Ethereum that combines yield farming with the meme world. The project develops precisely through the connection with memes. The image of a bulldog was chosen as the logo, the developers themselves create memes with it, promote their merch store, and promote a community of Hoge Army fans.

At the same time, the project team relies on the use of the token in video games: in the future, the company has plans to create a platform that will allow token holders to donate or invest in indie games. In the future, there will even be games created that will allow community members to use and win HOGE. In this way, community members can contribute to the process of creating games both in the field of development and in the field of investment.

Memecoins are a cryptocurrency based on inspiration from a specific meme or Internet joke. HOGE developers are working not only on the cryptocurrency market. At the end of 2021 the company HogeGameLabs was founded, which develops DApp games integrated with the DeFi ecosystem.

Its main feature is that for each purchase and sale, tokens are burned, and HOGE holders receive a share of the transaction as a reward.

“The basic concept of HOGE is quite simple. It is a deflationary currency, managed by the community and based on memes. It's like DOGE, but DeFi. The coin has 1% burning and 1% redistribution, so everyone who holds a token in a standard ETH wallet is constantly farming the coin," said the founder of HOGE during the AMA session with SatoshiClub.

This makes HOGE a deflationary cryptocurrency based on the Proof-of-Value principle. This means that every time HOGE is used, the number of HOGE tokens remaining in circulation decreases and, as a result, increases in price. As more transactions occur on the network, the individual net profit of everyone who owns part of the network also increases.

As indicated on the project's website, 1% of tokens are burned during each exchange, while 1% is distributed among holders. Thus, the token shortage is growing and the entire supply provides liquidity.

There will never be more HOGE in circulation than there is at the moment. As a result, each HOGE owner has an incentive to maximize the use of HOGE.

How to Buy HOGE Coin?

Hoge Finance is an ERC-20 token, so the only way to acquire it is by using Ethereum.

If you would like to buy Hoge, the top exchanges for trading Hoge are currently PancakeSwap (V2), Uniswap (V2), Gate.io, 0x Protocol, WhiteBIT, Decoin, BKEX, 1inch Exchange, BigONE, and ZT.

At centralized exchanges — there are no intermediaries, that is, there are no increased service costs, and the commission amount is set directly by the company. And here it is quite low — only 0.01% for withdrawal of funds.

On the Uniswap decentralized exchange, the commission is 0.30%.

Can You Buy HOGE on Coinbase?

Since HOGE is an altcoin running on ERC-20, to purchase it, you will need to buy ETH first, and then use ETH to purchase HOGE using exchanges.

Don't forget to leave funds to pay the transaction fee. Confirm the purchase and follow the on-screen instructions to complete.

Is HOGE a Good Investment?

There are many meme tokens about which there is no certainty that sooner or later more attention will be paid to them. But there is such a possibility, so they can be purchased for a small amount, which it will not be a pity to lose.

Despite the success of such tokens in recent months, and before that - in 2021, it should be understood that, although in the short term "meme" tokens can bring unprecedented interest to investments, in the long term, most investors may lose up to 99% of their investments.

We can say that their growth is a real trend, but it is unlikely that it will be stable if the general trend of the market changes. If usually, the value of a coin consists of the success of the solutions proposed by its developers, then the mechanisms by which the value of meme coins is calculated are more often irrational and chaotic.

In summary, we can say that "dog coins" (such as DOGE, Shiba Inu, etc) are a speculative asset that is secured only by a large community. The trading volumes of "meme" tokens attract new investors, but there are no fundamental reasons for the price increase of such tokens — there is only the technical effect of the free market from the artificial distortion of supply and demand — more attention from the media, more demand, and hence a potential price increase.

Such coins are not so much a financial instrument in which you can invest, but rather a joke, on the success and mass character of which the price of the coin will depend. In those cases, investors usually wait for a "pump" - a sharp price increase, after which they fix profits.

cryptocurrency crypto how to buy hoge hoge finance
The opinions and assessments expressed in the text are the views of the author of the article and may not represent the position of Cryptogeek. Do not forget that investing in cryptocurrencies and trading on the exchange is associated with risk. Before making decisions, be sure to do your own research on the market and the products you are interested in.