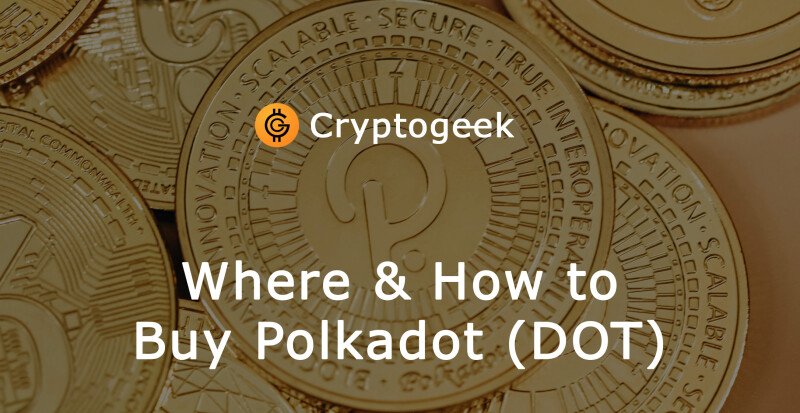 What is Polkadot (DOT)?

Polkadot (DOT) is one of the most promising projects in the crypto world for the foreseeable future. Some may even argue it’ll eventually replace Ethereum as the #2 crypto in the world, due to its faster and more scalable chain.

Polkadot offers an incredibly fast-paced blockchain for transactions while its fees are lower when compared to the ETH  blockchain.

The project has its back covered by the Web3 Foundation and the well-known Computer Scientist Gavin Wood - with a knick for blockchain technology development, he was even a part of the team that Vitalik Buterin assembled for the Ethereum project in the early beginning.

Gavin Wood is the main (key) developer of solidity (the programming language used for building DApps in Ethereum’s network) and he has made it clear that one of his main goals with Polkadot is to improve scalability and enable new cross-chain features and functionalities, bridging the gap between these achievements at the lowest fees possible.

Polkadot is an open-source project with a decentralized protocol, inspired by blockchain technology, that connects blockchains and other technologies, allowing informational and transactional exchanges between them.

Where to buy Polkadot

If reading about the wonders polkadot does for the crypto community has left you wondering where you can buy Polkadot, we got you.

Why complicate things that aren’t hard at all? Polkadot is listed on a wide variety of major exchanges, from Coinbase to Binance.

So in order to be able to buy Polakdot and add it to your crypto investments wallet, sign up for an account (let’s say you choose Binance) complete the KYC process, and deposit funds to your account (they can be Fiat or crypto). Go to the trading section of the exchange (in Binance, it’s called ‘Markets’) and choose the pair you’re trading with (BTC/DOT, USDT/DOT, etc..), and set up your order. It’s that easy. 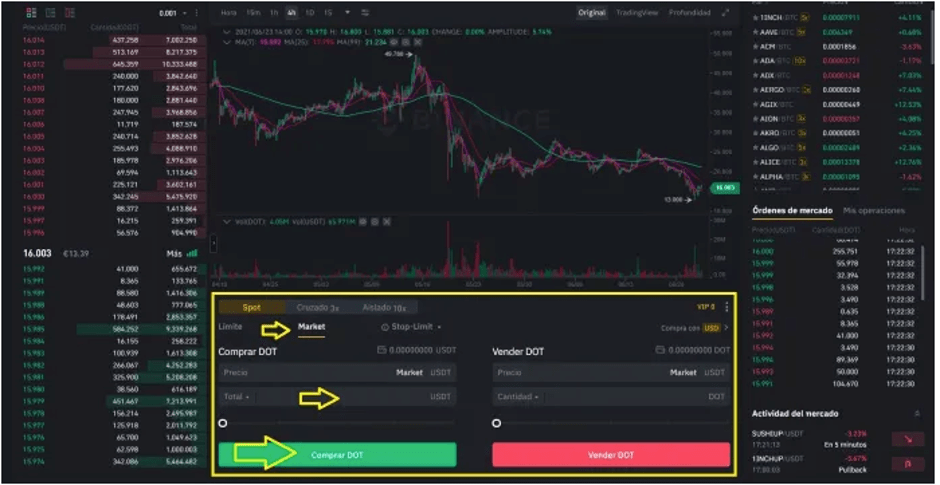 If you don’t want to go through a KYC process, you can opt to use a decentralized exchange platform (or DEX for short which do not require these procedures). Here's a list of DEXs that list Polkadot.

How to buy Polkadot in US

To be able to buy Polkadot in the US, all you have to do is find a US authorized to exchange with DOT listed on it. Where can you buy polkadot crypto in the US?

Luckily, we got your back in this matter too.

Coinbase, for a start, operates in the US and has Polkadot available for trades.

If you feel like Coinbase’s operating fees are a bit steep, Binance.US is another good choice of an exchange to go with.

Is Polkadot a good investment?

Yes. Up until this paragraph, everything we've said about DOT sounds idyllic, and it is. Obviously, there are some things to improve, and bugs and malfunctions are bound to happen even with the best technologies. But Polkadot’s project has managed to do what no other chain, network or project had been able to achieve before: connect independent blockchains, allowing them to operate simultaneously and in cooperation. That's like being able to connect Route 66 to the París-Dakar itinerary.

The project’s popularity is undeniable and the constant updates from the developers’ team help with the whole ‘growing ecosystem’ notion that Polkadot stands behind.

There can never be enough interoperability, network speed, and low fees - which means Polkadot still has a lot of ground to cover and we wouldn’t even be surprised if its reach went beyond the blockchain and into the ‘real’, physical world.

For this price prediction, we based our result on priceprediction.net’s forecast. Their past price analysis plus technical analysis of the current market and DOT price movements make this forecast a solid reference for price evolution and ROI calculations.

The fan-nominated ‘Ethereum killer’ has been showing its worth through thick and thin. At the peak of the 2021 bull run, DOT was worth a little over 51$, which shows its price growth potential to an extent - many analysts and fans alike believe the price will go up to 200$ or more in the next 5-8 years.

The developers’ team is so committed to the project that it even managed to complete Polkadot’s first development phase to the  full extent before Ethereum 2.0 arrived. This new Ethereum version integrates features that were already available thanks to Polkadot.

Will it ever surpass Ethereum in popularity and usability? Only time will tell. This project is definitely one to watch and keep close. Polkadot can’t execute smart contracts (Ethereum can), but the rumors have it that Polkadot 2.0 will be able to do so.

Polkadot’s main strength is chains and network interoperability (remember the NPoS?), which doesn’t require special hardware and is much more efficient energy-wise.

For more on the most frequent questions, go to the main source on the official website.

Is there a maximum number of chains that Polkadot can connect?

No. The whole concept of scalability is to make it this way. No limits, all of the advantages.

Where can I find a list of resources on Polkadot?

Can I be a part of the Polkadot community? How can I help?

There are several ways to do this: you can hold DOT in your wallet and participate in voting pools, you can become a developer, you can donate to the project, you can join an Ambassador Program, or even host a Polkadot Rendez-Vous. You can start here.

cryptocurrency crypto polkadot dot how to buy
The opinions and assessments expressed in the text are the views of the author of the article and may not represent the position of Cryptogeek. Do not forget that investing in cryptocurrencies and trading on the exchange is associated with risk. Before making decisions, be sure to do your own research on the market and the products you are interested in.