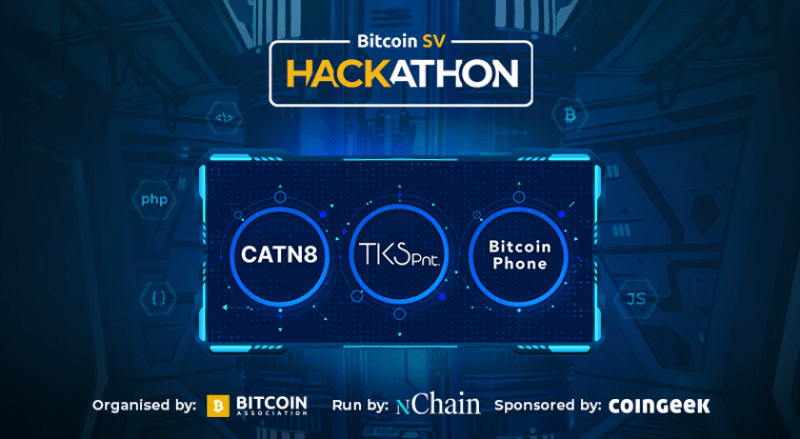 The three BSV Hackathon finalists are CATN8 submitted by Marcel Gruber, Dave Foderick and Thor, Bitcoin Phone by Joe Thomas, and TKS Pnt by Meta Taro. Each of the finalists has turned in P2P applications built on the BSV blockchain that utilize the recently released SPV Channels solution as well as the Merchant API (mAPI), according to the theme of this year’s BSV Hackathon.

Inspired by Section 8 of the Bitcoin white paper, CATN8 is micropayments-based platform that allows for video streaming content to be securely delivered and routed, offering all the features of a monetized video player, a streaming media server and an SPV streaming wallet. “Referred to as the ‘Money Button of video players’ by its creators, the project sources its inspiration from section eight of the Bitcoin white paper to realize the full potential of the BSV blockchain to empower the Internet of the future.”

Bitcoin Phone mimics the basic functions of the Voice-over-Internet Protocol (VoIP), but takes it to a higher level using the BSV protocol. It is an early application of a new Voice-over-Bitcoin (VoB) protocol that enables voice data to be broadcasted over the BSV network in near real time. “Bitcoin Phone is enabled by the unique characteristics of the BSV blockchain—namely its ability to quickly propagate and process transactions with large data payloads for minimal transaction fees.”

These three innovative P2P applications have certainly earned their right to be ranked within the top three of the blockchain competition. In addition to already being guaranteed prize money payable in BSV, the a representative from each of the three BSV Hackathon finalists will also get to attend the CoinGeek Conference that will be held on October 5 to 7, 2021 at The Sheraton, Times Square in New York, where they will present their final projects in front of a live audience.

A panel of carefully selected expert judges, as well as the live audience, will then vote for the best P2P application. Being able to attend the three-day blockchain conference not only provides these finalists with enlightening knowledge about the BSV blockchain, but also allows them to meet executives and professionals in the blockchain space. They may also be able to secure investment to launch their apps.

Finalists from previous hackathons have been successful in launching their platforms, such as TonicPow, Britevue and Kyrt. BSV Hackathon strives to provide developers and innovators with an avenue to build applications on the BSV blockchain, which is unique in its unbounded scalability, low transaction costs and high throughput.

cryptocurrency bsv crypto bitcoin sv hackathon coingeek conference
The opinions and assessments expressed in the text are the views of the author of the article and may not represent the position of Cryptogeek. Do not forget that investing in cryptocurrencies and trading on the exchange is associated with risk. Before making decisions, be sure to do your own research on the market and the products you are interested in.