The ‘Summer’ Season Of The Crypto Market: What Is ‘Altcoin Season’? 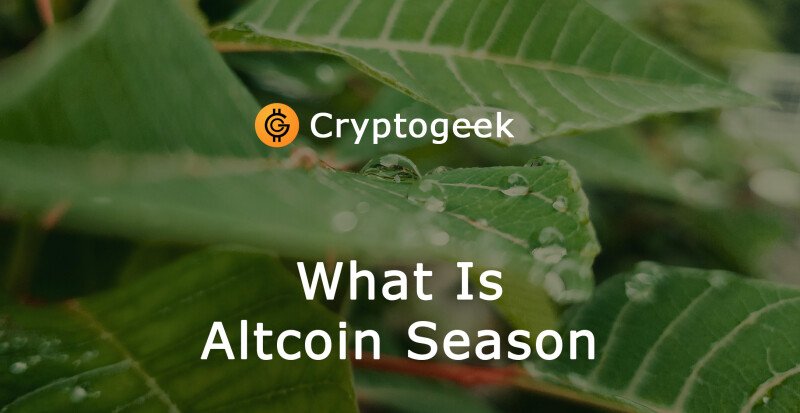 No, we’re not talking about the weather (although the title may point to that), we’re not using some exclusive, made-up word to get your attention and we are definitely not going crazy (just yet) - alt season crypto is kind of a great deal.

But, we do feel that after so many price analyses and project reviews, it’s only fair to dive into the pool (pun intended) of Altcoin season and explain a couple of things. 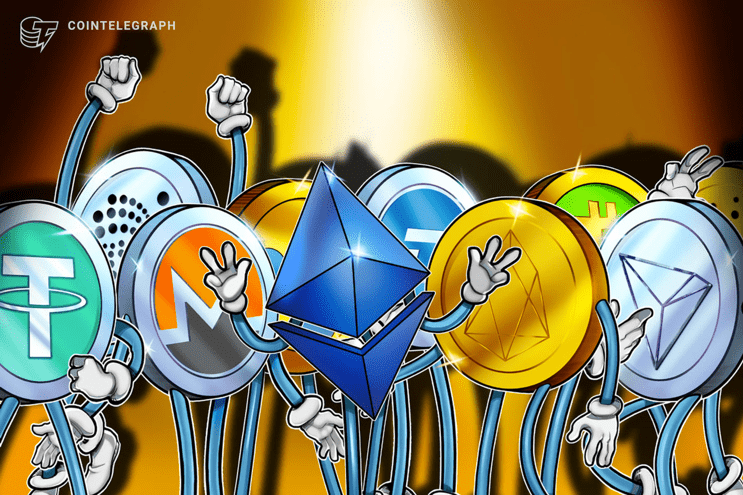 Ok, so what is Altcoin Season?

Whether you’ve just gotten your toes dipped in the crypto market, or you’re a veteran crypto geek, the altcoin concept appears really early in the game and its definition is both simple and self-explanatory (I mean, it’s right there in the name ‘alt’). An altcoin is considered to be a token that isn’t Bitcoin. This right here is the ‘purest’ and strictest definition of all. If it ain’t BTC, it’s an altcoin (alternative + coin). If you’re not so strict on definitions and kind of have a thing for Ethereum as well, although ETH is an altcoin as well per the standard definition, it’s grown so much and become so important and indispensable (as of April 2022, at least), that it can be considered as the long lost cousin of BTC and, therefore, is not just any altcoin (and it kinda feels like we’re insulting by calling it that…).

Every time you hear ‘it’s alt season’, that means that crypto side projects that weren’t shining before or getting attention are pumping and gaining popularity day by day (in Shiba Inu’s case, by the hour) in a sustained, prolonged way that establishes that it is not just a whim from investors, but an actual cycle where the alts are going off the charts. If the crypto market is volatile as it is, once the altcoin season cycle begins, it’s every holder by itself.

How long is the altcoin season?

Well, at this point it really goes without saying that markets, especially crypto markets, are volatile and unpredictable. Even the best, most brilliant crypto and financial minds alike have tried to time the market and failed time and time again.

So we really can’t give you an exact period of the duration of an Altcoin season per se. We also can’t provide an exact date for when the next Altcoin season cycle will begin (yes, the beautiful 2021 alt cycle one is long gone).

But fear not…it’s not like we’re going to leave you at your device after coming so far along in this article. ;) Here are a few tips/info on the calculations for an alt season duration:

But wait, how do you know if it's the alt season already? We can consider the alt season cycle initiated once 75% of the altcoins in the market surpass BTC trading volumes & market cap for 3 months. That’s an alt season right there - when the Bitcoin supremacy is challenged by the youngsters and all kinds of tokens and respective projects arise to claim the trading volume and price chart throne!

The altcoin cycle is not that hard to spot, because having access to endless charts and price updates by the minute, all we need to do is pay attention and compare the data.

As stated before, especially with such a cryptic and hectic market like crypto, volatility is bound to happen, and therefore, there’s no 100% accurate prediction or index that can help us tame these altcoins and gather that profit. But, thanks to the Blockchain Center, you can consult their index to try and keep your mind oriented during this game. This amazing resource measures the investor’s sentiment and determines which season is settled.

This is index is pretty easy to read and even easier to access:

Remember: this is an estimation and you shouldn’t make your investment decisions solely on this index.

Now, if you’re more of a chart person instead of Indexes and like to visualize your data with a few more metrics than a heat bar, then the altcoin season chart is for you!

Again, we’re going with Blockchain Center’s tool for this one. Just keep scrolling down after accessing the link and you’ll find a really nice chart.

Not only do you get this great chart, but you’ll also stumble upon an altcoin season bar graph, like this one: 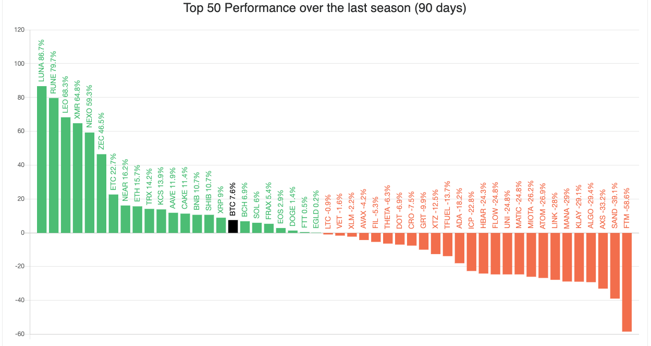 There is another very useful chart, which is the dominance chart. Remember that altcoin season is declared after their dominance is bigger than Bitcoin’s for at least 3 months in a row. So if your style is to compare and analyze instead of just reading someone else’s analysis, take a look at this chart. It uses a color scheme to quickly represent and display BTC, ETH, and USDT dominance against the other tokens:

And it presents the result in percentage and monetary values along with the corresponding dates. 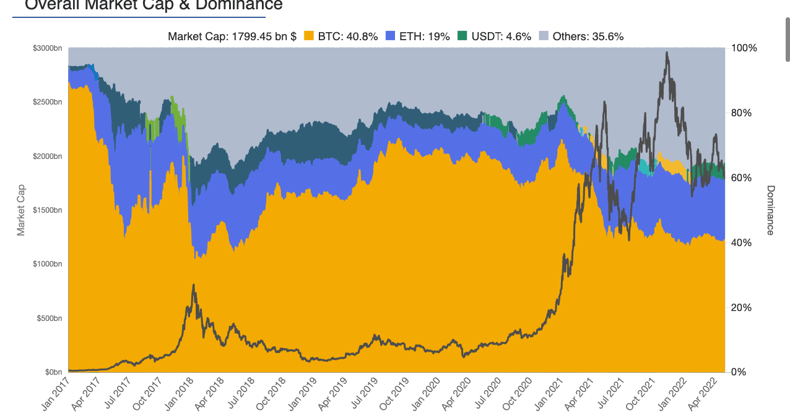 Ok so all of this has been fun and you’ve sure appreciated the resources we just shared with you and a couple of definitions. The question that brought you here is still to be answered though: when is the alt season in 2022? And the definitive answer is…we don’t know. And if anyone’s telling you they know, chances are it’s a big fat lie. You can’t time the market, especially one as volatile as the cryptocurrency market. Even the best estimates sometimes don’t make the cut or underperform. And the truth is that maybe 2022 doesn’t get to have an altcoin season at all.

Yes, you can make serious dough $$ during an alt season and we can’t wait for the next one. But remember that gains are not made during that season only and although Bitcoin’s starting to sound like ‘old news’, it is still king. Ethereum is second to the king. Solid blockchains, with solid projects and developers behind them, and even the best of altcoins sometimes depend on these tokens’ blockchains and scalability. So, in the meantime, maybe solidify your knowledge (you can never know too much), take your time researching and investigating your favorite projects, and hold - hold on for dear life. 🦾

crypto crypto market altcoin altcoin season summer season
The opinions and assessments expressed in the text are the views of the author of the article and may not represent the position of Cryptogeek. Do not forget that investing in cryptocurrencies and trading on the exchange is associated with risk. Before making decisions, be sure to do your own research on the market and the products you are interested in.