Bitcoin is criticized for being unecological. Proof-of-work consensus mechanism safeguarding the Bitcoin network requires mind-blowing levels of energy consumption. These levels are comparable to the energy consumption levels of some of the European countries. The harm of the Bitcoin network is such a huge issue that Tesla ceased accepting payments in Bitcoin until the eco-friendly solution is found.

Creators of newer cryptocurrencies came up with new ways of transaction validation that didn't require mining. However, some people still want to have this opportunity to mine coins instead of buying them. If you are one of them, you should pay attention to the Chia coin, an eco-friendly minable coin.

What Is Chia Coin?

Chia coin (XCH) is a cryptocurrency created in 2018. The following year, the company gathered $5 million in investments. The mainnet was launched in May 2021. The project is a brainchild of Bram Cohen, a creator of BitTorrent protocol, probably the most popular decentralized protocol in history. One of the main features of Chia coin is that it can be "mined" without harm to the environment. Even the word "mining" is replaced with "farming". However, the terminology change is not the only innovation of the Chia coin. The project reps even call the coin's differences from other currencies "radical". 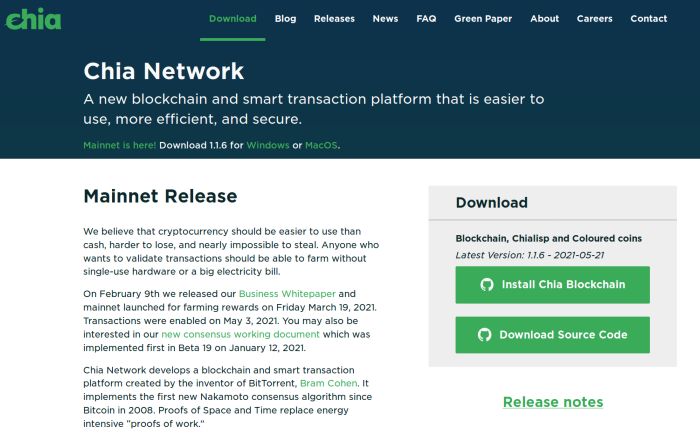 Chia coin (XCH) is a cryptocurrency created in 2018. The following year, the company gathered $5 million in investments. The mainnet was launched in March 2021. The project is a brainchild of Bram Cohen, a creator of BitTorrent protocol, probably the most popular decentralized protocol in history. One of the main features of Chia coin is that it can be "mined" without harm to the environment. Even the word "mining" is replaced with "farming".

However, the terminology change is not the only innovation of the Chia coin. The project reps even call the coin's differences from other currencies "radical". The consensus mechanism used by the Chia coin is unique. It is named Proof-of-Space-and-Time (PoST). According to the Chia COO and president Gene Hoffman, PoST is principally different from Proof-of-Stake as the network consensus doesn't depend on owning XCH coins. He says that the Chia coin is the easiest coin to validate for people without expensive hardware. For farming (validation) the spare storage space of your device is used for loading the data needed to find a new block. To increase the chances of finding a new block users should have more free space. Interestingly, a consensus algorithm used by Chia makes it impossible to mine XCH in pools. This feature prevents the centralization of the Chia network. By some accounts, today Chia is the largest blockchain based on the unallocated hard disk space. Some time ago this position was held by Filecoin.

The team behind Chia coin does not perceive Proof-of-Stake as a trustworthy protocol citing the problem of the potential centralization of PoS-based platforms. The history of PoS-based blockchain can be revised more easily than on Proof-of-Work (and Proof-of-Space-and-Time) blockchains. Additionally, the Chia coin team claims that in PoS systems quite small groups of validators tend to concentrate many tokens which leads to centralization, censorship, and other evils. PoST is more like PoW, however, Chia coin developers have managed to make "mining" (or better say farming) ecologically clean. In this measure, PoST is an improvement to Proof-of-Work, or at least the Chia team thinks so.

Unlike Bitcoin and many other cryptocurrencies, Chia coin is inflationary. Instead of uncontrolled inflation typical for fiat currencies or supply limits usual for many big crypto coins, Chia coin relies on planned continuous inflation. There is no limit to the amount of Chia coins that can be mined but the supply growth is totally predictable. 21 million XCH was pre-mined before the mainnet launch. 21 million XCH more will be added via farming by 2042. The mining reward will be splitting in two with the time, just like the Bitcoin mining reward does.

The Chia coin team is aimed at total compliance with regulators to ensure that the project isn't a scam, so users and investors can rest assured they are dealing with a company that is responsible for what it's doing. No shady activity can be expected from the Chia coin. Losing money to a scam is not the case for those who choose to invest in Chia coin or use it as a means of payment or store of value. It is guaranteed by the law. The company is going to get a public listing as an exchange-traded fund (ETF). It will allow investors and traders to use it as equity. The Chia IPO is expected to take place by 2022.

Chia is not only a means of payment. There is bank-like functionality presented on the network, too. For instance, there is a Chia lending program. The platform aims to provide its service to banks and other institutions including governmental ones.

The features that come with the Chia coin are clawback escrow, slow paper wallet, and colored coins. Clawback escrow allows you to claw the funds back in a specified time span after the withdrawal. A slow paper wallet is a wallet with the feature of scheduled smart transactions sending coins to your hot wallet. The slow paper wallet uses a separate private key. Colored coins are a tool for the creation of non-durable value so the Chia blockchain-based finance platforms can operate without using flash loans. It is an important feature as many decentralized platforms get "hacked" through flash loans. Colored coins address this problem.

Developers can build apps on top of the Chia blockchain. To do so they will have to use a dedicated Chia programming language called Chialisp. This language is supposed to provide an additional security layer and is easy for code audits.

Two important aspects should be considered before we say that Chia is safe or not. First, the project is run by established professionals and they demonstrate their strive to act in a legally clean environment. This means that there is almost no chance that the company can appear to be a scam although the huge amount of pre-mined Chia coins is already making some people doubt the Chia team's intentions. In theory, it seems that the network and the company are safe and can be trusted. However, the innovative nature of the platform creates another concern — as the POST algorithm is quite young we don't know from experience if it works well. Only after a significant amount of time will we be able to firmly say that the Chia coin is a safe platform. What we can conclude today is that Chia is not a scam entity and if you are ready to experiment with new technology you can pay attention to this project.

As for the market performance of the coin, we see that the coin had a powerful start. After the launch of the mainnet, Chia was traded at $700. After several huge ups and downs, the coin got back to the $700 mark as of early June 2021. 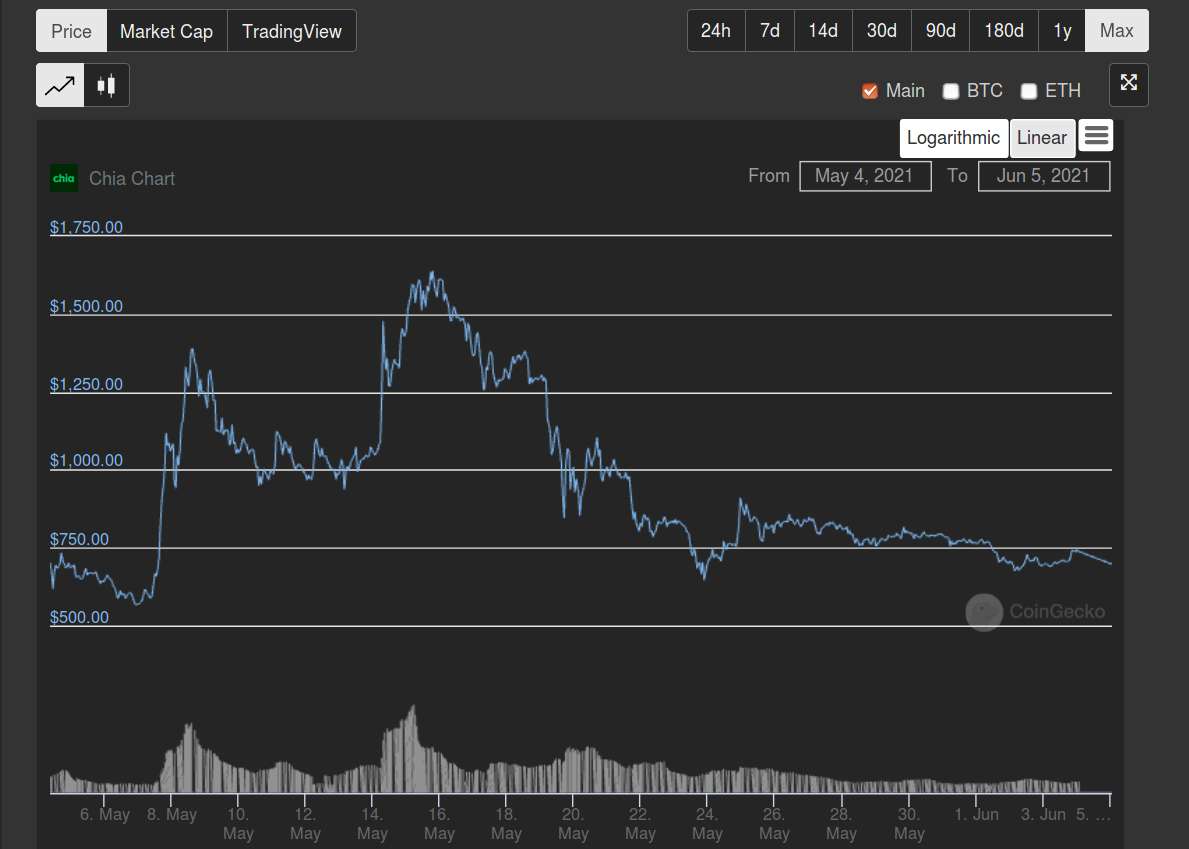 As of June 4, the coin had its peak price on May 15. That day it was traded at $1,645. As you can see, so far the coin price is in a turbulent zone which means that trading Chia comes with huge risk while allowing to earn extra profits in the case of luck.