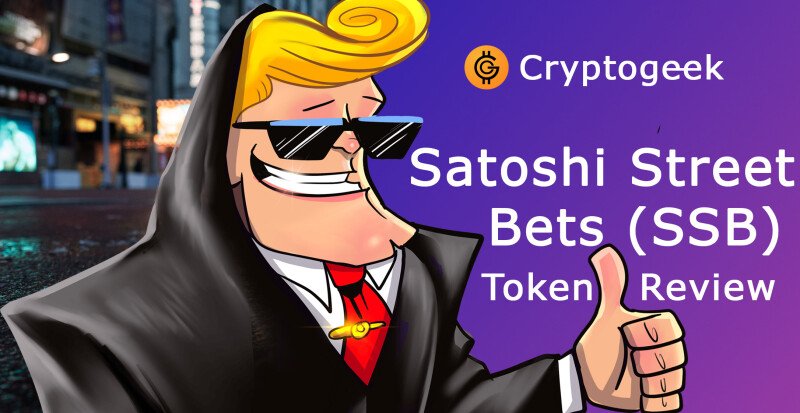 This review will answer the following questions:

● What is Satoshi Street Bets (SSB)?

● Is there a difference between SSB and Satoshi St. Bets?

● What is the Satoshi Street Bets Discord?

● What is the Satoshi Street Bets Telegram?

● How do I buy Satoshi Street Bets token?

Satoshi Street Bets draws from a rich history of memes, uncensored speech, and wild financial investments. The name derives from the WallStreetBets subreddit, which touts itself as a mix of 4chan and Bloomberg.

The visual style of SSB borrows heavily from the same subreddit. Compare the home page of the Satoshi Street Bets official website (top half of the image) and the front page of the WallStreetBets subreddit (bottom). 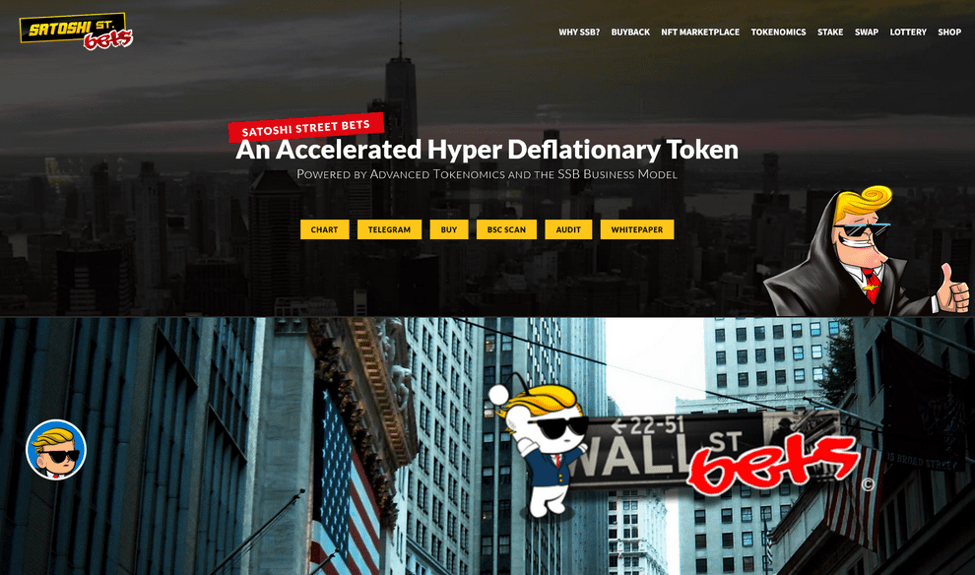 By replacing the "Wall" in the name with "Satoshi", the mystical creator of Bitcoin, the makers of SSB hint at rebelling against the financial establishment using cryptocurrencies. Presumably, they are inspired by the WSB subreddit managing to upset the stock market over the Gamestop stock, which was slated to tank in 2021. WSB subreddit users managed to prop up the Gamestop stock and cause at least $19.75bn in losses to Gamestop short sellers.

There is no difference between SSB and Satoshi St. Bets, though the latter is only used in branding imagery.

SSB Radio is another way crypto-enthusiasts can receive financial information. The official SSB website states the satellite radio broadcast will showcase promotions related to the industry, new projects, and crypto education. SSB developers claim that they will vet projects before showcasing them and implement KYC for their developers by using government IDs. 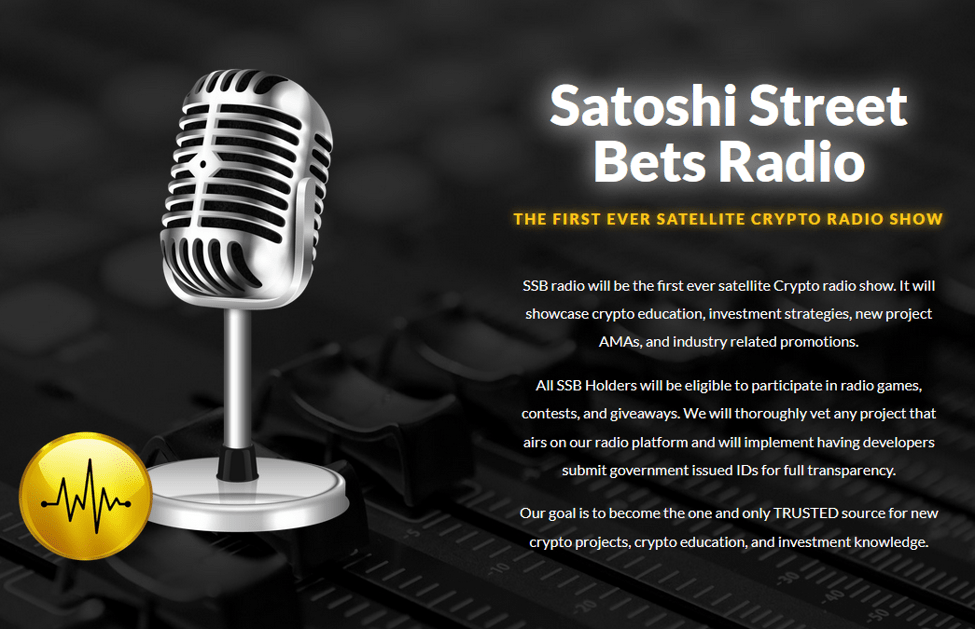 The stated goal found in the whitepaper is becoming a trusted source of information. This goes against the tenets of crypto, which is to have a zero-trust, decentralized payment system. Contests, radio games, and giveaways are also mentioned.

As of March 7, 2022, there is no more information on this feature or plans by the developer.

SSB official Twitter is found by clicking the Twitter logo at the bottom of the home page on the official website. Checking the profile on March 7, 2022, showed it has been suspended due to violating Twitter rules.

The official website also has the Telegram logo in its footer. Clicking it and mousing over the "View in Telegram" button reveals the channel is called "SSBTokenOfficial". Searching Telegram for "ssbtoken" yielded three results. 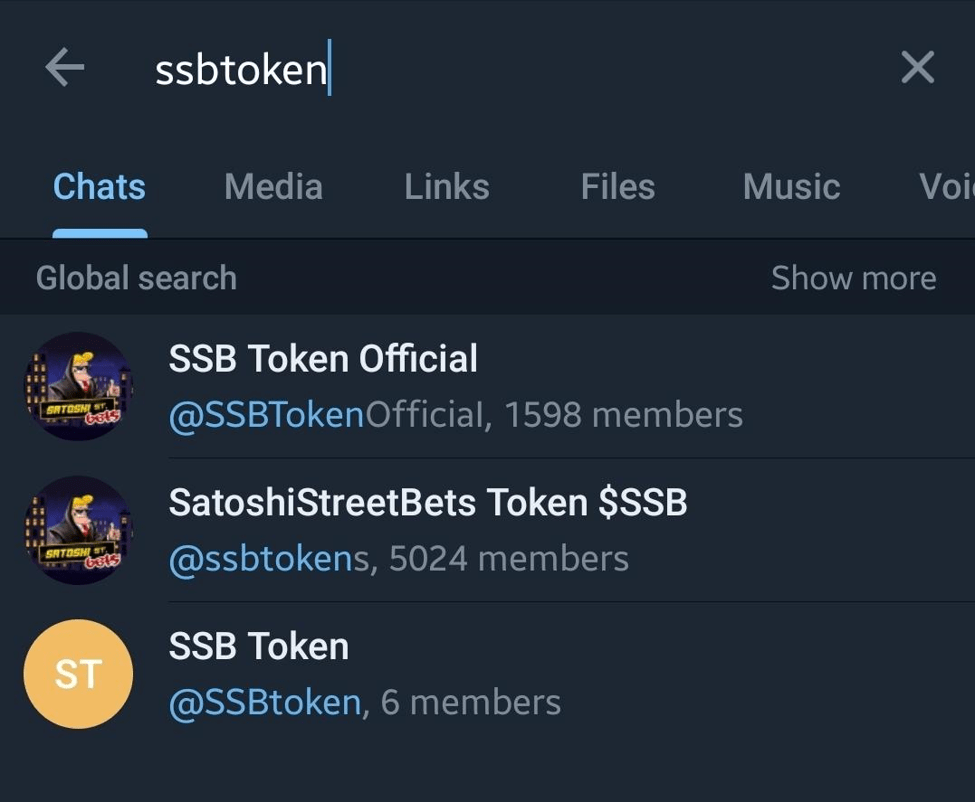 SSB Token Official consists of a bot repeating a support message, seen below.

The SatoshiStreetBets Token $SSB channel consists of assorted accounts boasting that they won money in a giveaway. This appears to be the "send X, get 3X money back" type of scam, with fake accounts trying to give legitimacy to it.

There is no official Reddit community, though there is Satoshi Street Bets, which is unaffiliated and filled with memes rather than financial information. There is no Discord link anywhere on the official website.

The SSB whitepaper is found by clicking the "Whitepaper" link on the official website. It offers a feature known as "Buy The Dip" (BTD). It appears this feature provides traders who buy SSB with a discount when the price is 10% or more below the ATH. The goal is to create buying pressure on SSB. 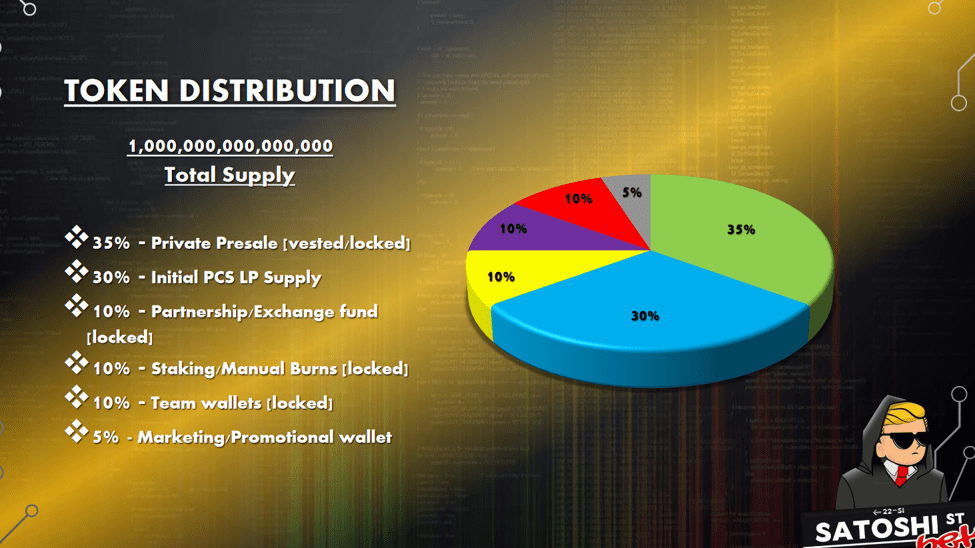 CertiK did an audit of SSB on October 8, 2021, and a revision on October 25, 2021. The audit found 9 issues, 8 of which were fixed by the time of the revision. The remaining issue is categorized as "Centralization/privilege" and marked as a major flaw.

The "View PDF" button on that web page reveals the full text of the audit. Scrolling to the heading "Global-03 | Centralization Risk" reveals the issue. In short, there is a risk of the privileged account being hacked. 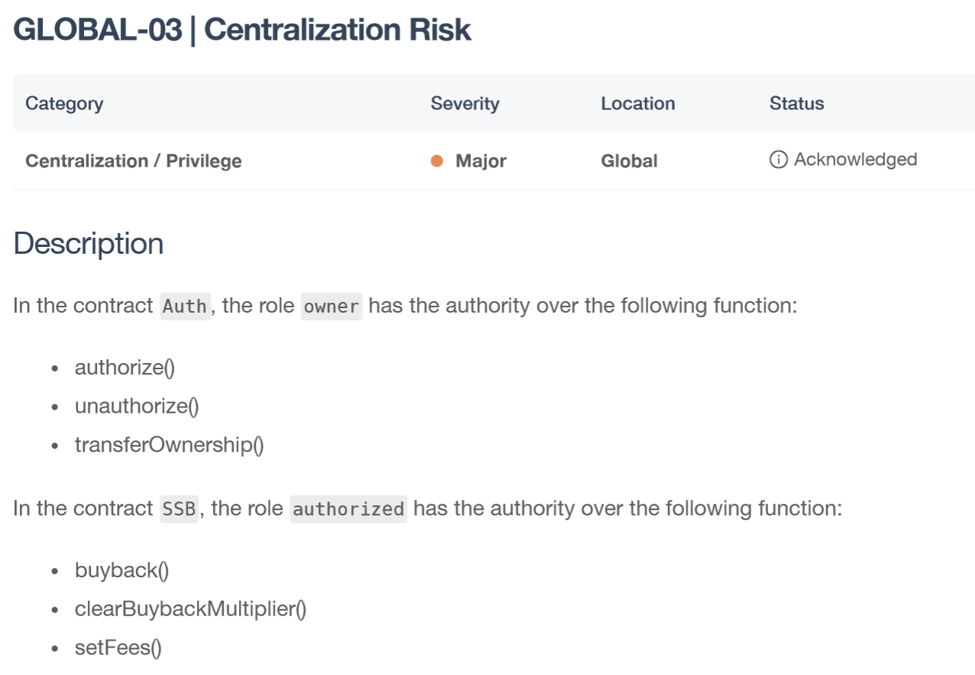 That page also reveals SSB is made in the Solidity language.

The main draw of SSB, as explained on the official website, is that it’s a deflationary token. That implies that SSB tokens are taken out of circulation, presumably raising the price of the remaining ones.

The whitepaper explains the transaction tax is 12%. The breakdown is as follows:

SSB's official website boasts Leviathan and lottery buybacks. Based on the wording, Leviathan is a smart contract that activates on occasion and executes some unknown strategy. This contract receives 6% of all SSB transactions. It can create staking pools and buy back other tokens. The whitepaper says the contract is based on automated learning.

3% of every SSB transaction goes into the SSB Lottery contract. It will not be available at launch but only once the rewards pool is filled. The whitepaper states the Lottery contract will pay out prizes, fund community events, and finance the SSB marketing. 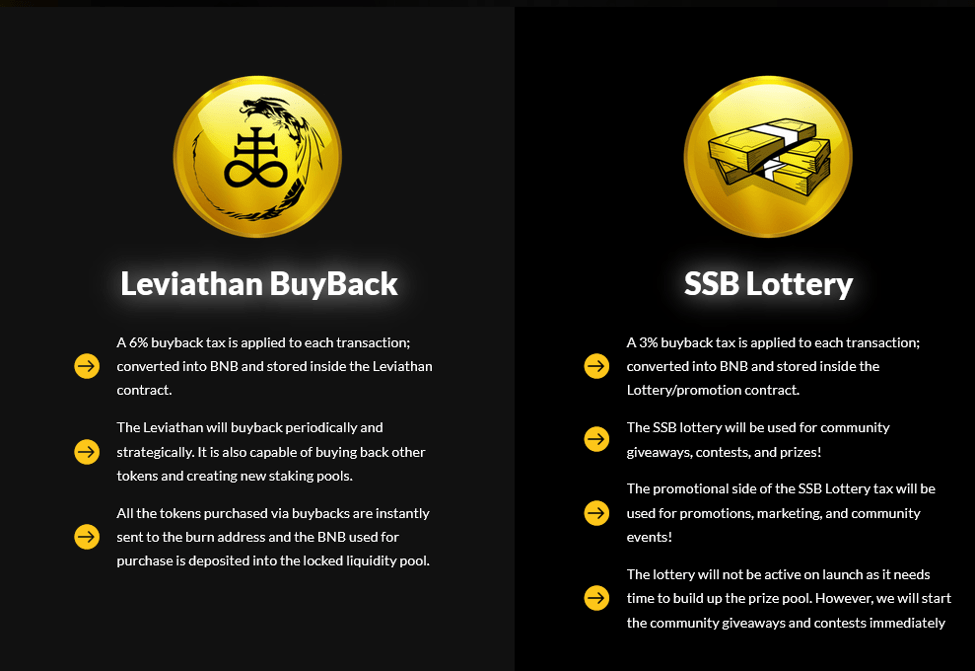 The SSB merch shop is visited by clicking "SHOP" in the top right corner of the official website. It sells apparel, decorative items, and coasters with SSB imagery.

SSB holders can stake it on Satoshi Stake to earn other cryptos. The whitepaper claims the SSB developers will hold community votes to see which projects get added to the staking pools.

Called "The Streets", the SSB NFT marketplace will be available only to SSB holders. The official website claims auctions will have discounts and lowered fees for SSB holders, hosting live auctions for them.

This feature is not yet available and there is no further information on when it will be released.

Scrolling all the way to the left on the chart and mousing over the first data point reveals SSB was first traded on October 21, 2021.

There isn’t enough data to give a long-term price prediction. However, it is safe to assume SSB will not breach the 1-cent mark in 2022 unless the SSB developers can deliver strong fundamentals.

Visit the SSB DEXchange and select one of the currencies:

Click the "Unlock wallet" button and connect one of seven wallets:

SSB appears to be safe, though the ultimate intentions of developers are not known. The whitepaper states that one goal is to set a standard of behavior for crypto communities. Based on the clues found in the developers’ description of SSB Radio features, it appears they will use SSB as a springboard for another project that involves communication.

The adoption of "buy the dip" phrase hints at SSB developers wanting to make a community they will leverage to manipulate prices of cryptocurrencies. Therefore, it is likely they will try to manipulate the public through the Radio feature, in particular by hosting projects where they have backroom deals.

In the whitepaper, the SSB developers boast of having a large network of resources and connections without naming anyone. This would indicate SSB developers have already made or are going to make deals with well-funded investors to promote earmarked tokens through Radio and then pump and dump them.

SatoshiStreetBets (SSB) is a new crypto project that holds a lot of potential. The SSB developers found a gimmick and built their messaging around it. That already puts them in the top 10% of cryptocurrency developers. The whitepaper is slick and the marketing is well made. However, there is no talk about rebelling against the financial establishment.

The fundamentals explained in the whitepaper are paper-thin; the whitepaper itself is barely 700 words long. There is nothing substantial behind SSB besides marketing. Until there is, keep track of it but beware of manipulative tactics, in particular, "buy the dip".

crypto token review Satoshi Street Bets ssb
The opinions and assessments expressed in the text are the views of the author of the article and may not represent the position of Cryptogeek. Do not forget that investing in cryptocurrencies and trading on the exchange is associated with risk. Before making decisions, be sure to do your own research on the market and the products you are interested in.