"Whatever 2030 may bring us, you can expect Orbs to be at the forefront of technological innovation" An interview with Orbs VP 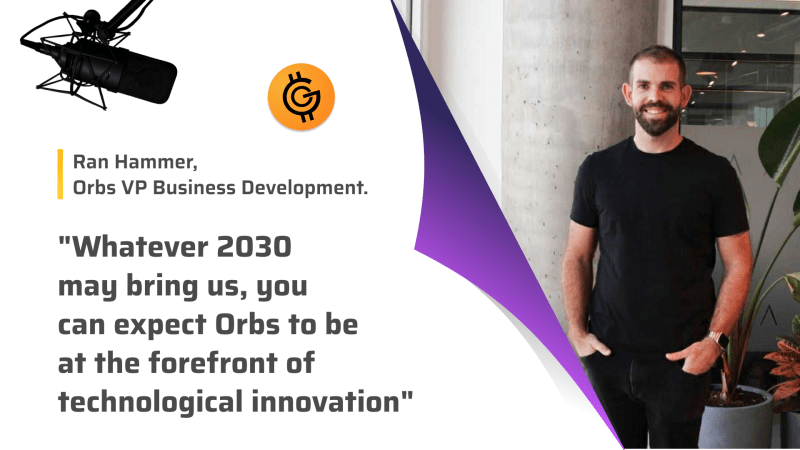 Cryptogeek: For what practical purposes can your platform be used? Could you give us some examples?

Are there already popular apps based on your platform? Could you name some of them?

With recent developments in the blockchain industry and the explosion of Decentralized Finance, Orbs has shifted much of its focus to the DeFi space. As Tal Kol, Orbs co-founder, explains in this 2 part video, we believe that DeFi will emerge as the killer app of blockchain technology. As a result, since last year there has been a major expansion of the Orbs ecosystem, with a large focus on integrations with DeFi ecosystems.

Consequently, the Orbs ecosystem has expanded beyond Ethereum to include integration with three other major chains: Binance Smart Chain, Polygon and Solana, with Avalanche being the fifth major chain. In addition, Orbs has accelerated the integration of the Orbs ecosystem with over 17 major DeFi platforms such as UniSwap, SushiSwap, Balancer, PancakeSwap, AnySwap, Kyber Networks, 1inch, Alpaca Finance, Beefy Finance, QuickSwap, DinoSwap, KogeFarm and many more....

After setting down this strong foundation for Orbs’ multi-chain interoperability, Orbs is set to advance to the next stage. Already the Orbs team is working on several exciting projects in the DeFi space to best utilize these unique features of the Orbs architecture.

Orbs unique features designed for interoperability primarily with EVM-compatible blockchains, together with its decentralized network of nodes, gives it a competitive advantage in various DeFi applications and a potential for new and exciting technological innovation as an L-3 value extraction layer.

In addition, the Orbs team recently announced its second call for grants under the Orbs Ecosystem Grant Program. For this round, the focus will be on applications that will draw on the power of the Orbs Universe, with its Guardians and Delegators, using their ability to arrive at consensus through the Orbs protocol incentive layer powered by the ORBS token.

We are very excited about tapping the potential of Orbs in the DeFi space. Already we are seeing applications of amazing innovative projects being developed on Orbs. Expect more to come in the near future!

Cryptogeek: Should your token ORBS be viewed as a stand-alone cryptocurrency that can compete with Bitcoin, or is it primarily a token to power your platform?

Ran Hammer: The ORBS token is primarily used for the Orbs Network and is not a stand-alone cryptocurrency.

The Orbs protocol is decentralized and executed by  a public network of permissionless validators using Proof-of-Stake (PoS) consensus. The Orbs protocol relies on the ORBS token used for the settlement of fees related to app execution and provides the system of incentives used to elect validators (who are referred to as “Guardians”) in a secure and decentralized manner.

As the native token for the network, the Orbs platform relies on the ORBS Token to fuel network  operation and provide the means to pay the fees involved with operation of the consensus  layer, execution of smart contracts and consensus-based storage, which are the three primary  services provided by the platform. ORBS Tokens can also be used to participate in the network’s proof-of-stake ecosystem.

Cryptogeek: The price of your ORBS token has increased significantly compared to the previous year. A particularly sharp rise in the price of the token was in March, when the price of ORBS rose by more than 700 percent over the week. What do you think is the that?

Ran Hammer: Orbs is a decentralized, permissionless network. Anyone who wishes can become an ORBS token holder and participate in the Orbs ecosystem.

The ORBS token is available on multiple CEX including tier-1 exchanges such as FTX, KuCoin and Upbit, as well as many DEX-AMMs across more that 5 chains.

The ORBS token is important for the health of the Orbs ecosystem and its use in proof-of-stake is a key component in the security of the Orbs network. There is currently more than $200M in total value locked across the Orbs staking contracts and we are glad to see this level of participation and ownership being taken by the Orbs token holders.

Regardless of the secondary markets, the Orbs team believes that continued development of  the Orbs network and the building of different uses on it represent the key value of the Orbs ecosystem

Cryptogeek: What are your plans for the near future?

Ran Hammer: These are truly exciting times for the Orbs project.

As mentioned above, the Orbs team, as well as other developers groups, are hard at work on various intriguing projects, especially in the world of DeFi. New integrations, project releases and partnership announcements are made almost every week!

The best way to stay up to date with everything that’s going on with the Orbs project is through the official Orbs telegram group, as well as the Orbs twitter page.

Cryptogeek: How do you see the future of the project in the long term, for example, by 2030?

Ran Hammer: Orbs is one of the biggest crypto projects coming out of Israel, which is in turn, home to many well known crypto projects in the industry. The Orbs team consists of more than 30 of the best and finest developers and engineers that the Israeli start-up nation has to offer.

Whatever 2030 may bring us, you can expect Orbs to be at the forefront of technological innovation and retain its status as a leading blockchain project in the crypto space.

Cryptogeek: What do you think is the reason for the current fluctuations in the price of bitcoin?

Cryptogeek: Do you have any predictions about the future of the cryptocurrency industry? What could change over time?

Ran Hammer: The crypto industry is truly a blue ocean where everything can happen!

We suspect few people could have foreseen a few years ago the way the crypto space has evolved and the explosion of applications such as DeFi and NFTs. Who knows what the future may bring, you can let your imagination run wild and still you’ll probably be far from the mark of the crypto revolution.

Whatever the future may hold, we think everyone in this industry has the conviction that crypto will fundamentally disrupt the way we live our lives. In what ways exactly? We honestly are not sure, but that is part of the excitement of being a crypto pioneer!

cryptocurrency interview orbs
The opinions and assessments expressed in the text are the views of the author of the article and may not represent the position of Cryptogeek. Do not forget that investing in cryptocurrencies and trading on the exchange is associated with risk. Before making decisions, be sure to do your own research on the market and the products you are interested in.