How to Mine Groestlcoin - Ultimate Guide 2022 by Cryptogeek 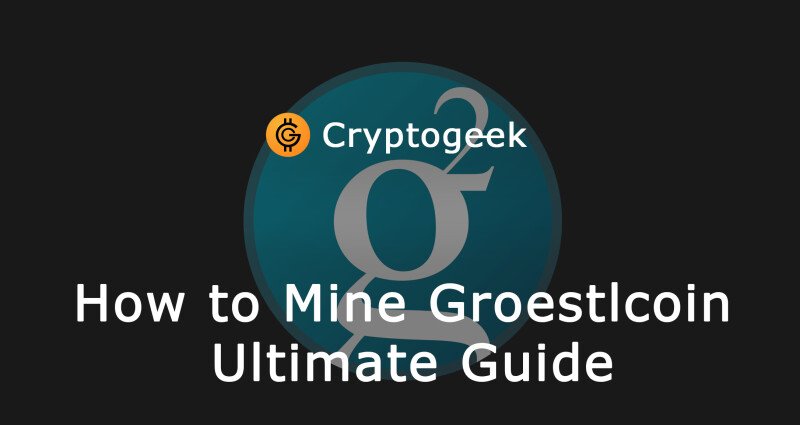 Crypto mining started to get a lot of traction as soon as Bitcoin became a thing. Initially, only a handful of people were mining the coin, and since it had no value, there was no interest in it. Once Bitcoin broke the $0-mark, people figured that there was a profit potential, so they started mining it.

In the early days, you could mine Bitcoin on anything that had a CPU, literally anything. Since the interest was low, people were mining the coins on laptops and were getting good rewards. At that time, the value was low, so even if you could get hundreds of coins, when you converted them into US dollars, the price was low.

As the years went by, the popularity of cryptocurrencies increased, and so did the number of people that mine them. Proportional to the increase in miners and coins, the value of the coins was growing. That pulled more people into mining, which at this point became a bit more complicated. While Bitcoin was mined on a laptop in the early days, later, mining rigs with GPUs or ASIC miners were needed to make a profit out of it.

At a certain point, people began experimenting with mining other cryptocurrencies, which leads me to today's topic.

There are thousands of cryptocurrencies currently available on the market, and the one I'll be talking about is Groestlcoin. Before I explain how Groestlcoin mining works, let's see what it is.

The platform is essentially the same as Bitcoin and Litecoin – a payment network relying on a peer-to-peer network. Launched in 2014, the idea behind the platform was to offer a platform with lower fees and a different set of features.

For starters, the network utilizes a mining algorithm called Grøstl-512. Thanks to that, it is referred to as the ASIC-resistant network. In other words, ASIC miners are useless for Groestlcoin mining.

In terms of the features, the main one that most people like is the low transfer fees. At the moment, you can move several thousand dollars worth of Groestlcoin, and the transfer fees would cost you less than a cent. Another feature worth mentioning is the implementation of SegWit or Segregated Witness. Groestlcoin is also the first network that successfully carried out a Lightning Network transaction.

How to mine Groestlcoin?

With the introduction out of the way, now let's dive into Groestlcoin mining.

As I mentioned in the previous section, since the coin is ASIC-resistant, it means that you won't be able to mine it that way. Your available options are CPU, GPU, and cloud mining. Since CPU mining these days is the least profitable, I will skip that. In other words, today, I'll explain how to mine Groestlcoin with a GPU, as well as outline some cloud mining options.

The first thing you'll need to find is a mining pool. The idea is to combine the hashrate of multiple miners and be the group that gets the reward. This is a better alternative to mining by yourself because you will need a very powerful mining rig, or you won't get rewards very often. You should keep in mind that when you enter a mining pool, there is a fee that isn't too big; most pools charge up to 1%.

Next up is, of course, the mining rig. This is where you have tons of options, and there are several ways you can do this. You can go with a single GPU you have installed on your computer, or you can build a mining rig with several GPUs. To see if it's worth mining Groestlcoin, I would recommend checking out WhatToMine's calculator. You can enter various information about the equipment you have or plan to have, and you'll get a rough estimate of how much profit you'll make.

How to Mine Groestlcoin with a GPU?

The type and number of GPUs you want to use are entirely up to you. A decently balanced Groestlcoin mining GPU should have a higher hashrate and lower power consumption. The better the ratio is, the more profit you can make from it. At the moment, your two options are team red or team green, so here are the best mining software for both scenarios.

There are plenty of mining software options for Groestlcoin, but the one I feel is the best is called CCminer. The app is available for Windows and Linux, and even though you'll need to run it through the terminal, setting it up and running, it is pretty simple. There is a detailed explanation of how it works on GitHub, where you can download the binaries. The best part about this miner is that it doesn't have a developer fee, something you may run into with other software. During the mining process, you can monitor various details such as GPU speed, hashrate per watt, power consumption, fan speeds, and temperature.

If you decided to go with an AMD GPU for mining, my recommendation is to use sgminer. Essentially, things are more or less the same as with the miner for the Nvidia GPUs. The software is available for Windows and Linux, and all you need to do is download the binaries from GitHub. There, you will also find plenty of information on how to set up the mining process. You will get away without a developer fee, but you may need to tweak some settings.

In some cases, a problem with the virtual memory may occur, where the miner will seem like it's working, but there will be no results. The reason for this is that you may be low on virtual memory, in which case you'll need to increase it. To do that, you'll need to go to the Control Panel, navigate to System and Security and then go into System. On the left, click on Advanced and then to the Advanced tab. Under the Performance section, click on Settings, and in the new window, navigate to the Advanced tab. Under the Virtual Memory section, click on Change. Another window will open, and you'll need to de-tick the first option.

Further down, you will need to tick the Custom Size option and enter the Initial and Maximum virtual memory. You may need to play around with the settings a bit, but I think that 16GB of virtual memory should be plenty. Also, keep in mind that the values will need to be entered in MB.

There are plenty of cloud miners out there, so I'll mention a few of them.

The first Groestlcoin cloud miner is IQMining. The service was launched in 2016 and is backed by a team of blockchain experts, meaning that you should expect an excellent set of features. In terms of mining servers, the company has servers in 6 locations: Canada, Russia, Iceland, Georgia, Algeria, and China.

For the pricing, even though there are 4 pricing plans, they are flexible, and you can pay as much as you want. Each package has a minimum contract, and once you reach a certain GH/s point, you get to the next tier. You should consider that you have a maintenance fee for the service, and it is charged as $0.001 for every 10 GH/s. The good thing about this cloud miner is that it offers daily payouts, meaning that you won't have to wait for your mined Groestlcoin to accumulate over a longer period of time.

When you open CryptoStar's website, you will feel like you went back in time. It has some retro vibe about it, but there isn't anything retro about this service at all. The service was launched in 2018, and since then, it is considered an excellent cloud mining solution, and I can say the same thing in terms of Groestlcoin mining.

Unlike most other cloud crypto miners, with Cryptostar, you won't find any pricing packages to choose from. Instead, the service says that the absolute minimum hashrate you can purchase is 20 GH/s, and the rest is up to you. The website has a calculator, where you can enter the desired hashing power and get a detailed calculation of how much profit you'll make per day, week, month, and year and how much that would cost you. There is a fixed 1% maintenance fee that is calculated from the total profit.

cryptocurrency crypto guide ultimate guide groestlcoin how to mine
The opinions and assessments expressed in the text are the views of the author of the article and may not represent the position of Cryptogeek. Do not forget that investing in cryptocurrencies and trading on the exchange is associated with risk. Before making decisions, be sure to do your own research on the market and the products you are interested in.