How to Mine Aion - Ultimate Guide 2022 by Cryptogeek 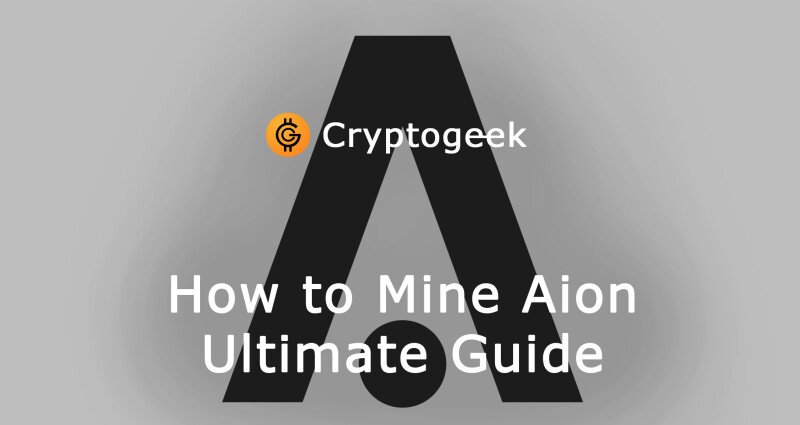 Aion is quickly turning into a popular choice. Thanks to the cryptocurrency's practical applications in blockchain space a growing number of people are turning to Aion mining or looking at how to mine Aion. The currency is easy enough to extract from its protocol, although it will always be to your benefit to familiarize yourself with how mining works.

In this guide to Aion mining we will present you with several ways of accessing Aion tokens while making sure that you are maximizing the efficiency of your mining operation.

Aion also uses the newest protocol in crypto space known as Proof of Capacity (PoC). To mine using this protocol you need enough hardware space. Let's get started by taking a look at what Aion is in the first place.

The first question we need to answer has to do with the very nature of Aion. What is it and why would you even want to mine it in the first place? Aion is an ambitious project that sets out to set many wrongs in the crypto space right.

This includes two major issues that even the biggest protocols today experience, to wit interoperability and scalability. While some currencies and tokens do better at interacting with other protocols, many third-party layers are needed to make this happen.

Understandably, that makes interoperability much more complicated and quickly adds to the second issue at hand – scalability. Scalability has proved difficult for the main protocols out there due to surges in use and blockchain that wasn't designed to support as much traffic.

Aion has managed to solve much of this, and it's slowly but steadily gaining support. It's a part of the Blockchain Interoperability Alliance, an initiative designed to bring crypto into the mainstream. Aion has already achieved a VM that is EVM compatible in a ground-breaking move for the protocol.

Now that we have a basic idea of what the currency is, we can explore it further in our detailed breakdown of how Aion is mined.

Get a Loan Secured by Your Crypto Assets

Get
Get a Loan Secured by Your Crypto Assets

How to Mine Aion – Let's Start at the Beginning

Before we get into the different methods, it's important to note a few things. Mining is an energy-intense process and every little optimization you may introduce to your system will make it much simpler for you to go through the process.

You want to make sure that all your GPU drivers are up to date and that your windows version is the latest available by the developers. In addition, an anti-virus may flag your mining software as a virus, which it is not. It's a good idea to make an exception to avoid having the process interrupted while you are not on watch.

Mine Aion with CPU

The first method will focus on CPU mining. This is a popular option that allows you to buy a series of powerful processing units that can carry out the complicated computations needed for the creation of Aion. To get started, you will need the right software, and at this point, there seems to be only two viable options:

They have both transitioned towards easy-to-use consumer software that can be set up and installed quickly. While you would still need to do some adjustments yourself, they have precompiled versions for both Windows and Linux.

Get a Loan Secured by Your Crypto Assets

Get
Get a Loan Secured by Your Crypto Assets

Unfortunately, they don't offer an OSX version as Aion doesn't offer Mac support, which is a bit of a drawback. Minergate and Nicehash will allow you to make full good use of the other available options, though. However, you ought to understand that CPU is generally considered the less optimal mining, when compared to GPU for example.

Put simply, the GPU is able to perform more calculations which, in turn, mean a greater output during the mining process. GPUs are designed to handle such computations better, but not because they are more complicated per se, but rather because they are repetitive and similar.

CPUs excel when they have to handle diversified work and put it all together, which is where their strength lies. With this small remark, we recommend stepping towards the core of the guide – GPU mining.

How to Mine Aion with GPU

Just like with CPU, you have two options when participating in Aion mining with GPU – AMD or NVidia. Both options are viable and AMD has long been touted as the more hard-hitting, albeit more energy-hungry option of the two.

However a string of streamlining moves in the past years have turned AMD into less of an energy-hungry monster while retaining the raw power of the GPU. However, Aion mining will definitely generate a lot of electricity, and more importantly – heat.

Heat can damage your hardware, so it's important to ask yourself if you can cool your installation properly. In general, NVidia seems to do little better with worse cooling, but you will equally have to ensure that you have a cooling system in place.

How Much Aion Can I Earn Every Day?

The fact you have thought of this question is indicative of the fact that you take your investment seriously. However, the best way to see if your set-up is optimal and sufficient, you need to calculate the costs and potential ROI.

This sounds like a complicated process that would require expert knowledge and it can be that, but the alternative is to use a calculator that will crunch the numbers for you. Of course, a calculator will mostly give you a rough estimate, but generally it's a good way to make sure that you are not overshooting by a lot or not quite meeting your targets

You will need to edit a few values to make sure that the calculator produces the most accurate surmise about the expected return you would be generating. Those include hash rate, power, cost and pool fee. If you like, you can enter the cost of your hardware to see little more adjusted rates that will help you run the expected return.

As you can imagine, there is a very good reason why people tend to pool their efforts and mine Aion, and most cryptocurrencies really, as part of a larger setup. A pool allows you to extract consistent small benefits from your mining.

If you choose to join a pool you will be generating constant revenue of much smaller rewards, but discoverability will be high as well, which means that you won't have downtime when you are not generating revenue. 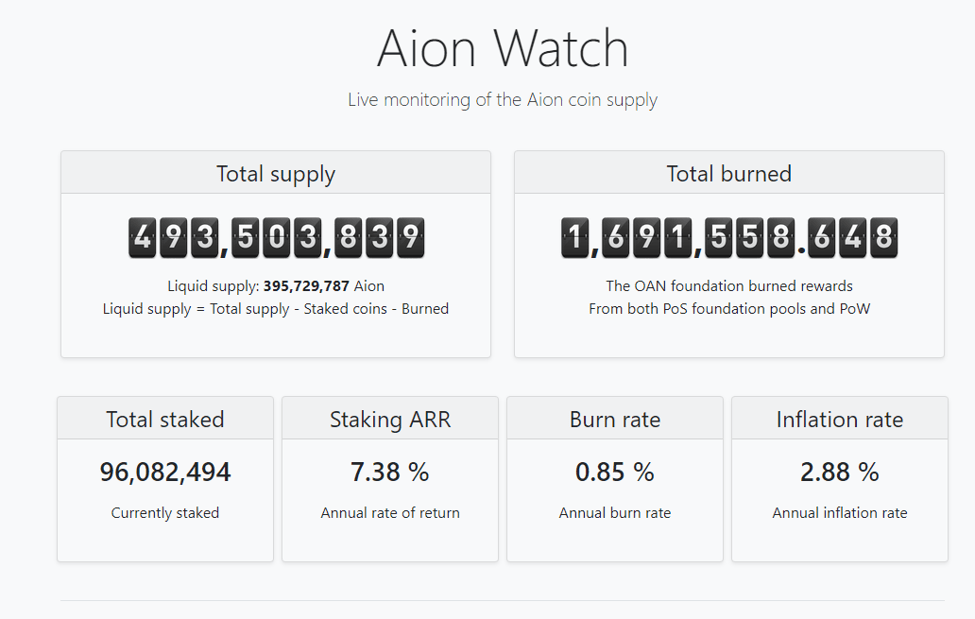 Conversely, you may opt for solo mining. That is a much more ambitious project that will require more upfront funding and a slightly better understanding of how Aion costs work. However, if you have the right setup you might just be able to generate benefits.

However, keep in mind that when mining solo, you will have a much harder time updating your software and hardware as you will want to keep the operation running, but also competitive. That requires continuous efforts in increasing the power of the setup you have handy.

A pool on the other hand will constantly attract new miners who are eager to make a low mining cost work in their favor. People who join will constantly give the pool bigger chances of discovering new blocks and claiming Aion. Yes, the payouts will be shared but this comes with the other benefits mentioned here.

Should You Mine Aion – Price Projections 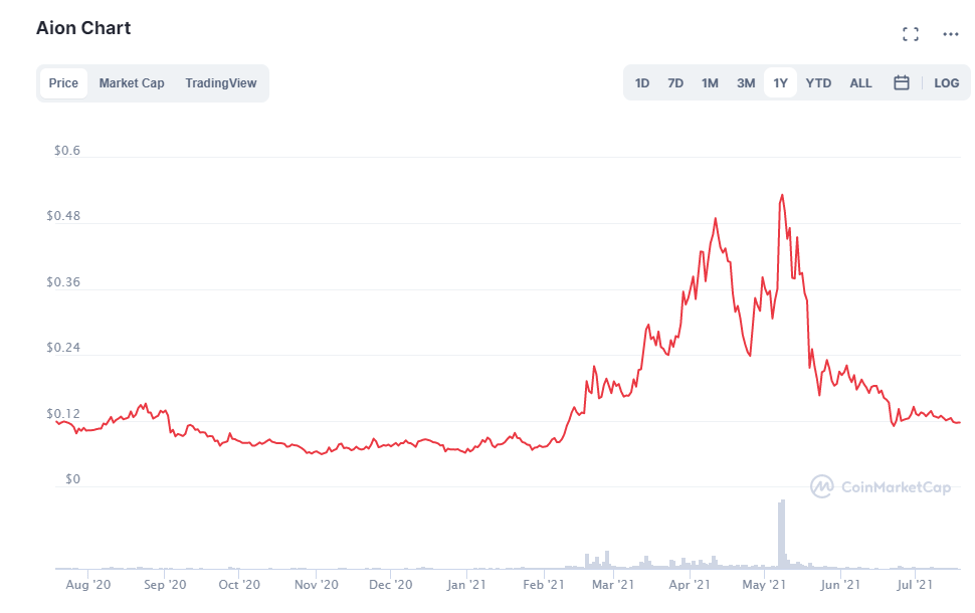 Aion price is well below its brief peak in May 2021, but it still holds ahead of the time before the massive bullish run that began and ended in the first half of the year. In light of this, Aion's core ambition is still a powerful argument as to why investing or even mining this currency is a smart thing to do. Especially when you consider the fact that the token's ecosystem allows you to participate at a very low entry cost.

cryptocurrency crypto mining guide aion ultimate guide how to
The opinions and assessments expressed in the text are the views of the author of the article and may not represent the position of Cryptogeek. Do not forget that investing in cryptocurrencies and trading on the exchange is associated with risk. Before making decisions, be sure to do your own research on the market and the products you are interested in.