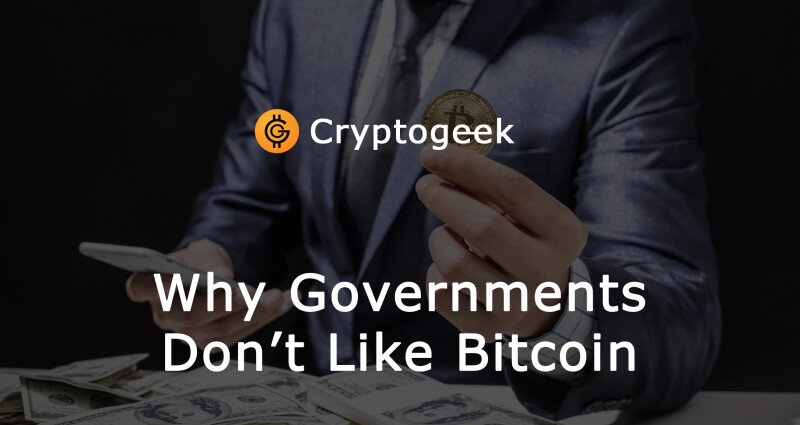 Bitcoin is slowly taking over the financial sector with many people accepting it as a reliable form of currency. This is a form of digital currency which is transferable between two accounts without the services of a middleman. Essentially, you can send Bitcoin without the help of a government body, financial institution, or a central bank. Some countries have accepted Bitcoin as a legal currency while others like Vietnam, Bolivia and big economies like China have completely banned its use. There are various reasons why many governments have resisted the use of Bitcoin. These include loss of control due to decentralization, crime concerns, the complexity of Fiscal implementations, and Bitcoin poses a threat to the business of Central Banks.

Loss of Control Due to Decentralization

When it comes to traditional currencies such as Yuan, Euros, and Dollars, governments enjoy the power to control them. For example, they can put in place monetary policies that will influence the economy. Traditional currencies are easily monitored as the government can collect taxes accordingly and also follow up on the money movements to calculate revenue.

Governments avoid the inception of Bitcoin because they lose control of the currency system. Bitcoin is all about decentralization, therefore the underlying technology denies governments the power to exercise central authority for transactions. This implies that governments may have little or no influence on their monetary policies.

The idea of decentralization has given criminals a perfect chance to engage in illegal activities. It has bred cybercrime where criminals are now infiltrating Bitcoin sites to steal money from innocent clients. Bitcoin technology has made it easy for drug barons to execute their deals in trading harmful chemicals and drugs. This digital currency has also become a favorite for extremist groups that are funding terrorism and dealing in crude businesses of dangerous weapons. Many governments have chosen to ban the use of Bitcoin to safeguard their territories and the lives of their people.

While criminal activities are the biggest concern for governments, fiscal treatment is another potential reason why they are adamant to legalize the use of Bitcoin. Online businesses such as e-commerce websites, and most gaming and betting platforms are embracing the freedom that comes with using cryptocurrencies. There are several casino comparison sites that have put focus on Bitcoin casinos, and you can find information about their legality and licenses, how to get started, and you can even get a welcome bonus when you sign up on a casino that offers cryptocurrencies like Bitcoins. Bitcoin casinos allow you to deposit and make withdrawals to your bitcoin wallet which guarantees anonymity.

Using a decentralized network and blockchain technology makes it almost impossible for governments to impose tax regulations and monetary policies. The most critical component of any monetary policy is tax, yet Bitcoin is a threat to this fundamental aspect of government revenue.

Loss of Business for Central Banks

Central banks are institutions used by governments to borrow and lend money. With the help of this bank, the government can control the economy and the borrowing patterns. Through monetary policies, governments can track currency movement, control who benefits from these movements, collect taxes, and trace criminal activities. Thus, the introduction of Bitcoin as a mainstream currency has posed a major threat to governments’ economic influence.

The Bitcoin Idea is Still Young

This digital currency was introduced a few years ago and it is still too young to inspire adequate confidence. The Bitcoin value keeps fluctuating, making it hard to determine its value. Nobody wants to use an unstable currency in their transactions and that is why countries have rejected its use. It is not clear whether Bitcoin will stabilize in the future but it is a matter of wait and see. However, based on the projected crypto trends for 2021, it seems to be on the right path and maybe it will be accepted in the future as a global currency.

bitcoin cryptocurrency btc crypto government the future of bitcoin
The opinions and assessments expressed in the text are the views of the author of the article and may not represent the position of Cryptogeek. Do not forget that investing in cryptocurrencies and trading on the exchange is associated with risk. Before making decisions, be sure to do your own research on the market and the products you are interested in.