What Are Decentralized Exchanges And Why They Are a Better Alternative? 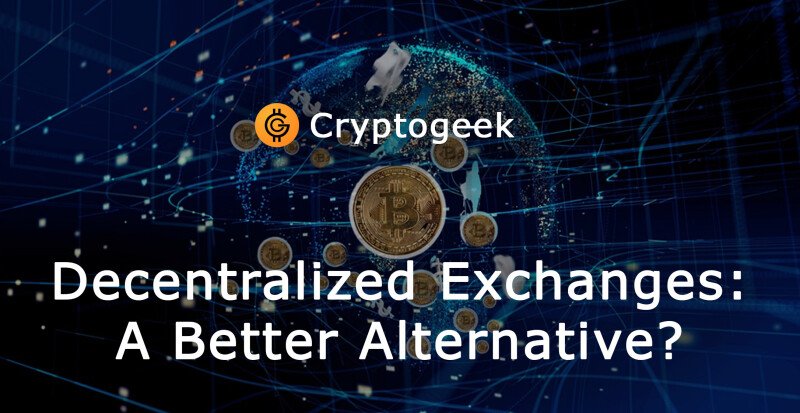 Decentralized exchanges are a relatively new concept that has emerged alongside blockchain technology. This model seeks to disrupt how a corner of the financial market works nowadays as the current infrastructure is dominated, in most part, by a handful of institutions that centralize all transactions.

These blockchain-based exchanges rely on algorithms and advanced consensus mechanisms to generate liquidity and process and execute transactions fast and without human involvement.

In this article, we dig deeper into this innovative business model that is aiming to revolutionize a segment of the financial markets that is relatively unknown to the common public. For more information on decentralized exchanges and other DeFi concepts visit defipedia.com.

The history of centralized exchanges

In the United States, the New York Stock Exchange (NYSE) was the first to be established in 1792 to operate as a centralized marketplace in which certain assets could be traded.

Only a handful of operators, also known as broker-dealers, were authorized to make transactions on behalf of their clients and that is still the way things work nowadays.

For a certain financial transaction, whether that is buying or selling a stock or a bond, to make its way to the exchange, there are at least two or three institutions involved in the process that make sure that orders are routed so they can be executed the fastest.

However, the involvement of so many players in this particular operation makes it costly for end-users and it can, in some specific cases, present a conflict of interest.

In essence, the role of an exchange is to process and execute trade orders in an organized fashion while also securing the highest level of liquidity possible for every listed security.

The rise of decentralized solutions

With the launch of Bitcoin (BTC) in 2009, the world was presented for the first time with an alternative to the traditional financial system, which involves the participation of an intermediary to oversee that transactions are completed.

In contrast, the Bitcoin network is a peer-to-peer system that operates through a set of nodes that are in charge of validating transactions and adding them to a distributed ledger.

Through the use of cryptography, blockchain technology can preserve records unaltered and guarantee that they will not be modified over time as once these blocks are validated and added to the chain they are considered immutable.

Years after the dawn of Bitcoin, a handful of developers have devoted their time and effort to build the next generation of blockchain-based applications that operate independently from a centralized institution through the use of smart contracts.

The future of high finance is here

Decentralized exchanges are what blockchain supporters have come up with to revolutionize one of the financial industry’s less known corners – the trading industry.

There are multiple types of decentralized exchanges but, in essence, they all accomplish the same function. They allow investors to exchange assets freely and without the intervention of a third party.

Let’s say a person owns 1 ETH and would like to trade that asset for 2,000 USDT. In an ideal scenario, a decentralized exchange would match both the buyer and seller of the two assets.

However, since cryptocurrencies are still relatively illiquid compared to other financial assets, the exchange can act as a market maker by using a pool of digital assets at its disposal to make sure the transaction is executed.

This pool typically comes from investors who stake their tokens with the decentralized exchange and are compensated accordingly.

Trading fees are low as there are no shareholders that need to be compensated for the activities performed by the exchange. Instead, all commissions go to those who provide the liquidity required for the system to function.

The pace at which blockchain is being adopted is faster than anyone could have expected, even though it is not entirely mainstream yet. The same thing happened to the internet many years ago and it has now become something that the entire world relies on to function. If centralized exchanges are the equivalent of what the telephone guide was years ago, decentralized exchanges could turn out to be the next Google of the financial industry.

exchange decentralised exchange blockchain crypto crypto exchange
The opinions and assessments expressed in the text are the views of the author of the article and may not represent the position of Cryptogeek. Do not forget that investing in cryptocurrencies and trading on the exchange is associated with risk. Before making decisions, be sure to do your own research on the market and the products you are interested in.