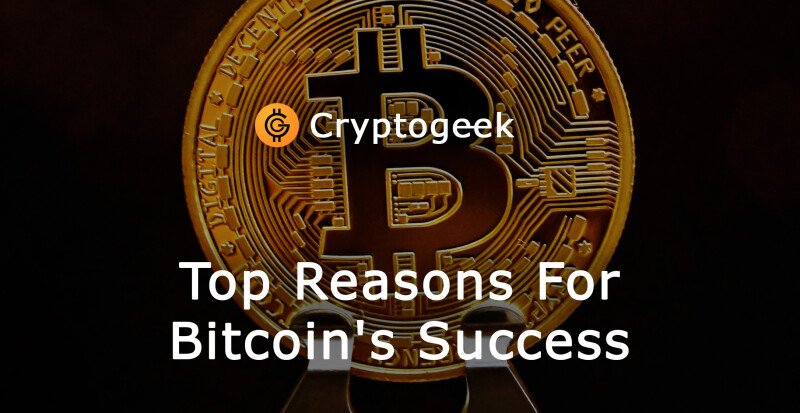 Like any other new technology, Bitcoin had its fair share of criticism on its arrival. Some people called it a dark web initiative, while others associated it with online scammers. Surprisingly, many people still don't believe that Bitcoin is a legitimate currency, just like the printed ones they use. Despite the earlier opposition, Bitcoin technology has gained immense popularity lately. Even though its value has decreased by almost half from the previous all-time high of $65,000, the cryptocurrency is still worth any investment effort.

Various countries and organizations worldwide have approved Bitcoin as one of their transaction means. There's also an ever-growing trend to invest in Bitcoin among global business icons. The appetite for Bitcoin will constantly increase even in the future. However, the critical question is, why has Bitcoin been so successful? This article explains four genuine reasons behind Bitcoin's inevitable success.

The concept of demand and supply applies to Bitcoin too. A decrease in the collection in the market results in a corresponding price increase. Only a few Bitcoins are in circulation today, which means their supply is low. The Bitcoin protocol stipulates that there can only be 21 million Bitcoins. If you compare this number against the world's amount of fiat currencies, you'll notice an extreme scarcity of Bitcoin.

The immense scarcity makes potential investors scramble for the few available Bitcoins. As a result, the value goes up, making the Bitcoin concept exceptionally successful. Projections indicate that the value of one Bitcoin would soon become too big to afford. However, people will use a fractional Bitcoin unit to achieve manageable prices.

Initially, accessing Bitcoin assets was difficult and impossible in most places. Mining was the most popular way of getting Bitcoin, and people could even mine the cryptocurrency with personal computers. However, increasing competition among miners made Bitcoin mining unprofitable. The situation improved with the emergency of crypto exchanges, like bitcoin trader , that connects willing buyers and sellers. Also, some merchants now accept Bitcoin payments, thereby increasing its circulation. For this reason, some entities argue that Bitcoin may replace the US dollar as the reserve currency.

A Better Currency Alternative for the Developing World

Most developing countries struggle with inflation problems, making commodity prices skyrocket. Workers in such countries don't adequately enjoy their salaries because the currency consistently loses its value due to rampant inflation. With Bitcoin, value fluctuations might never again be a problem for the upcoming economies.

Bitcoin has immunity against inflation because its protocol is unchangeable. It's a deflationary currency that can't lose its value due to economic uncertainties. Also, no single government, central bank, or any other entity can manipulate Bitcoin's value. Its ability to withstand financial turmoil is why some countries legalize it and make it a legal tender.

Reports reveal that nearly 2 billion people globally have no access to banking services. They can't borrow, save, or participate in some economic activities. It worsens for those in remote areas because some can't even access cash. Another 4 billion individuals use banking services but are extremely underbanked. The inability to borrow or save money in banks denies the victims the opportunity to establish and build impressive credit scores. As a result, they are poor, with nothing to do.

Bitcoin has recorded tremendous success because it addresses the banking challenges in countries that have embraced it. With a smartphone, Bitcoin enables everyone to transfer and receive funds seamlessly. People can also join the Bitcoin network to trade this cryptocurrency for profits.

Bitcoin is a global disrupter of conventional financial systems. People might no longer worry about declined loan requests or poor credit ratings with this electronic money. Developing countries can diffuse inflation effortlessly and give their citizens better lives with this innovation. Embracing Bitcoin could mean forgetting centralized currencies that governments manipulate at will. The above traits and trends could make Bitcoin's success inevitable.

bitcoin cryptocurrency btc crypto top
The opinions and assessments expressed in the text are the views of the author of the article and may not represent the position of Cryptogeek. Do not forget that investing in cryptocurrencies and trading on the exchange is associated with risk. Before making decisions, be sure to do your own research on the market and the products you are interested in.