Crucial Things to Know Before Venturing into Bitcoin Mining in 2022 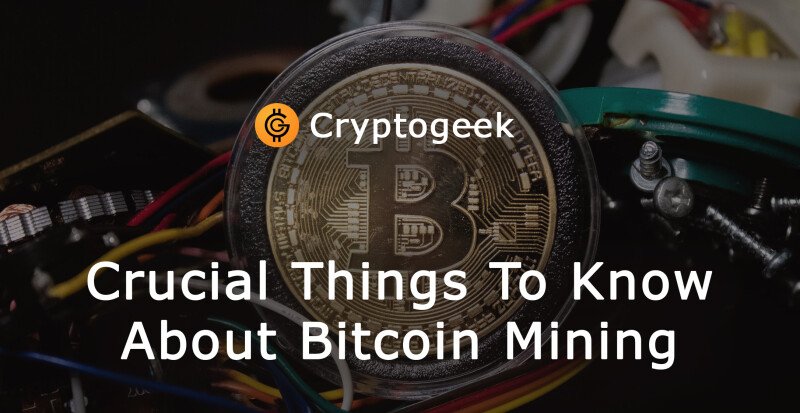 As the world increasingly moves towards a digital future, more and more people are looking for ways to invest in Bitcoin and other cryptocurrencies. And you can do this through mining, which allows users to earn new Bitcoins by verifying and recording cryptocurrency transactions on the blockchain. If you decide to go trading instead of mining, then you may use https://cryptotrader.software/ as it is trusted and proven to help novice traders with their trading journey.

While Bitcoin mining can be a great way to earn extra income, you should know a few things before getting started. This article will go over things you need to know about Bitcoin mining in 2022 to make the most out of your investment.

What is Bitcoin Mining?

Bitcoin mining entails verifying and recording cryptocurrency transactions on the blockchain. The Bitcoin network rewards miners with new Bitcoins for their work, which helps to decentralize the system and keep it secure.

Bitcoin mining is undoubtedly a computationally-intensive process that requires powerful hardware. Initially, it was possible to mine Bitcoin on your home computer. However, as more people have started mining, the difficulty has increased, and now it's necessary to use specialized hardware called ASICs.

ASICs are expensive and require a lot of energy to run, which is why most Bitcoin miners join mining pools. A mining pool comprises several miners who share their computing power and split the rewards. Others opt to trade Bitcoin on platforms instead of mining it.

What You Need to Start Mining Bitcoin

If you're thinking about starting to mine Bitcoin, there are a few things you'll need. First, you'll need to buy an ASIC miner, which can be expensive. Therefore, it's crucial to research before buying one.

You'll also need to set up a mining pool and join a team of other miners. Mining pools allow you to share your computing power and split the rewards.

Finally, you'll need to set up a Bitcoin wallet so that you can receive your rewards. Different types of wallets are available, so choosing one that's right for you is essential.

How Much Can You Earn From Bitcoin Mining?

The amount of money you can earn from Bitcoin mining will depend on several factors, including the amount of computing power you contribute to the pool, the current difficulty of the Bitcoin network, and the BTC price.

However, with the increasing difficulty of the Bitcoin network, it's becoming more and more difficult to mine new Bitcoins. As a result, many miners are joining mining pools so that they can share their computing power and split the rewards.

Mining pools typically charge a small fee (usually 1-2%) and require you to pay for the electricity used to power your miner. As a result, your actual earnings will be lower than the reward you receive from the pool.

What Are the Risks of Bitcoin Mining?

There are a few risks to keep in mind if you're thinking about starting to mine Bitcoin. First, it's important to remember that mining is a computationally intensive process that requires a lot of energy. And this means your electricity costs will be higher than if you used your computer for general purposes.

Additionally, the price of Bitcoin can fluctuate wildly, impacting how much money you make from mining. If the Bitcoin price goes down, you'll earn less money. However, you could earn a lot more if the price goes up.

Finally, it's important to remember that mining is a competitive process. As more people start mining, the difficulty will increase, and you'll need to contribute more computing power to the pool to earn rewards.

Is Bitcoin Mining Worth It?

Whether or not to mine Bitcoin will depend on several factors, including the current price of Bitcoin, the difficulty of the Bitcoin network, and the amount of money you're willing to spend on electricity.

If you're thinking about starting to mine Bitcoin, it's essential to do your research and understand the risks. However, if you can invest the time and money, it could be a profitable endeavor.

crypto mining bitcoin mining
The opinions and assessments expressed in the text are the views of the author of the article and may not represent the position of Cryptogeek. Do not forget that investing in cryptocurrencies and trading on the exchange is associated with risk. Before making decisions, be sure to do your own research on the market and the products you are interested in.