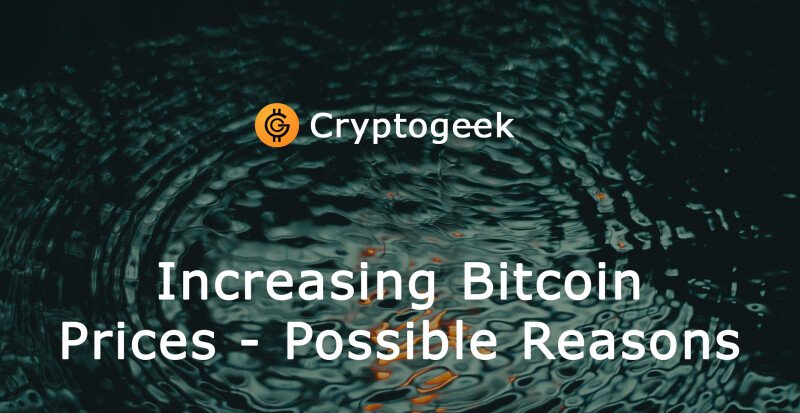 Are you wondering why Bitcoin prices have been increasing over the years? If so, here are the possible reasons for the rising Bitcoin value.

COVID-19 pandemic wreaked havoc on almost all economic sectors. Even the largest economies in the world felt the impact of the pandemic. But one thing that captured the investors' attention was the rising Bitcoin value. At the same time, several crypto startups emerged during the pandemic, catering to the increasing demand for virtual currencies like Bitcoin.

Platforms like the bitcoin code website, where people and institutions can purchase and sell this virtual currency, also have noticed an increase in users. Bitcoin's growth has also fueled the crypto market capitalization, crossing the $1 trillion mark. After being on a bull run for some time, Bitcoin accounts for about 69% of the total crypto market value.

While Bitcoin's price has dropped after hitting an all-time high price of around $65,000 per coin, experts predict that the cryptocurrency's value will eventually increase. Here are the possible reasons for the increasing Bitcoin prices.

Bitcoin has experienced extreme price increases and falls during its existence. At some point, critics have even dismissed Bitcoin as dead due to low prices. However, this cryptocurrency has always surprised critics and investors after emerging and breaking its price record.

Therefore, many investors and traders are confident that Bitcoin's price will increase even when it falls. Perhaps this explains the trend of buying Bitcoins when prices are low and holding them in their crypto wallets to sell them when the value peaks.

For this reason, some public companies have begun converting cash treasures into Bitcoin. For instance, Square, a payment company in the US, purchased Bitcoins worth $50. MicroStrategy, another US public listed firm, converted cash reserves worth $425 million into Bitcoin. Essentially, such companies consider Bitcoin better value storage.

And many more companies are following the trend, giving more investors confidence in Bitcoin. Growing confidence among corporate giants adds merit to this cryptocurrency as a value store and a currency.

Bitcoin's protocol limits its supply in the crypto market. And Bitcoin halving is an event restricting the number of Bitcoins entering circulation. Ideally, the Bitcoin network introduces new coins into the market via the mining process. Miners verify Bitcoin blocks or groups of transactions.

The Bitcoin network awards a specific number of coins to a miner every ten minutes for verifying a block before including it in the blockchain. But the reward that miners receive for verifying transactions and adding blocks to the blockchain reduces by half every four years. And that's what is called Bitcoin halving.

Also, it doubles the stock-to-flow ratio, making Bitcoin a highly scarce commodity. Halving is among the critical factors contributing to Bitcoin price. Since the world can only have 21 million Bitcoins, market currency circulation reduces as the reward decreases. The demand increases, leading to a higher price for this crypto asset as more people learn about Bitcoin scarcity.

With Bitcoin holding over half of the total market capitalization, its price variation can also impact other digital currencies.

These are primarily the possible reasons for the increasing Bitcoin prices. However, increasing accessibility of this digital currency and the move by countries like El Salvador to legalize Bitcoin could make it a mainstream currency or asset. Therefore, more people and institutions might want to trade or invest in Bitcoin. So, if you're yet to jump into the Bitcoin bandwagon, now could be the right time to do it.

bitcoin cryptocurrency btc crypto
The opinions and assessments expressed in the text are the views of the author of the article and may not represent the position of Cryptogeek. Do not forget that investing in cryptocurrencies and trading on the exchange is associated with risk. Before making decisions, be sure to do your own research on the market and the products you are interested in.