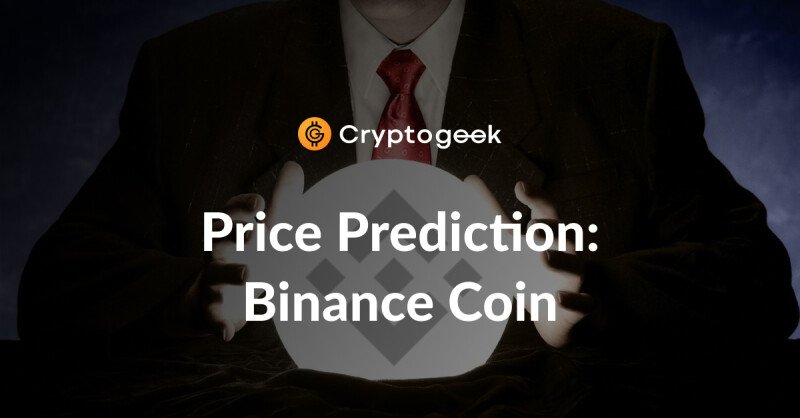 Predicting the future prices of these or that cryptocurrencies is not an easy task. We can learn a lot from the past rises and falls of certain coins but many circumstances influencing the market are barely predictable. It doesn't mean that the prices can't be predicted at all because some of the upcoming events are highly probable. For instance, we are witnessing a cryptocurrency resurgence and know about the upcoming long global economic crisis. These factors are supposed to fuel the cryptocurrency market in general and will definitely influence the price of Binance Coin in a certain way. We only should consider some other factors.

What is Binance Coin?

Binance is one of the most popular cryptocurrency exchanges. It was launched in 2017 in Hong Kong. Binance Coin (BNB) is the Binance native token created the same year. BNB is an ERC20 token that can be used to pay fees on Binance exchange. If traders choose to pay fees in BNB they get a discount. On Binance DEX many most currencies are traded against BNB so having this coin in the portfolio gives wider opportunities. It's fair to say that Binance Coin is one of the most popular native tokens. Moreover, Binance Coin is one of the top 10 cryptocurrencies by market cap.

The quick success of the token is easily explained by the huge popularity Binance managed to gain very soon after the launch. Binance Coin was distributed during the ICO campaign. Half of the tokens were bought by the public and 10% was given to angel investors. The rest BNB coins went to the Binance team. The exchange has good liquidity, provides hundreds of trading pairs, and is capable of processing a high amount of transactions per second. All these qualities have made this exchange one of the leaders on the market of cryptocurrency exchanges. The trust of the community in this exchange and the privileges provided to traders using BNB coin resulted in the popularity of this asset.

Binance Coin was made available in the summer of 2017 — not long before the historic peak of the entire cryptocurrency market. Even without looking at the details, we can already guess that the coin's price has gained its all-time-high by the end of December 2017, nosedived in the spring of the next year and is oscillating around the value much lower than the peak price but better than it was in "crypto-winter". That's pretty much a typical trajectory of the price of any coin launched in the second half of 2017.

In the first days, BNB was traded at around 11 cents per coin but by the middle of August, the price had surpassed the $1 level and almost reached $3 on August 23. There was a correction in early September when the price has dropped below the $1 mark again. By the end of the month, it has grown a little surpassing the $1 level once again. Until the beginning of December, the BNB value was moving up and down between $1 and $2. In December the price has suddenly taken off updating new heights daily.

On December 26, the price reached $10 for the first time (although it didn't last long). In early January of 2018, the BNB price was fluctuating around $8. On January 5 the price had skyrocketed reaching around $16 at maximum. In the next few days, the token was trading at over $20. The maximum for BNB of that period was reached on January 13 when the price peaked at $23.67. On January 16 the trading was closed at $13.89. In the next few days, the price continued to drop gradually. That wasn't solely Binance Coin's decline as the entire cryptocurrency market began to lose its value those days. One of the key factors for that was the ban of cryptocurrency-related business in China — a significant player in the global cryptocurrency industry. It is also important to realize that the price of Bitcoin was allegedly manipulated and the value of $20k was unnatural. The prices of many altcoins that became popular those days (including BNB) were reflecting the BTC's peaking price. The fact that after this rally the prices of most altcoins didn't manage to reach the same or bigger values is absolutely OK.

In February the price had dropped below $10 and was fluctuating in $8 to $10 range until late March. Since March 31 the price was always above $10, reaching up to $15 at times. The resurgence continued the whole spring through and finished only in late June. During that period the BNB price was moving from $12 to $17. In July there was a little step back and in August the token price had dropped below $10 again. For most of the fall, the price was quite stable — around $9 or $10 but in late November it has fallen harder.

On November 24 the price dropped below $5. Throughout December it was as low as $4 — $6. That was quite alright considering the fact that altcoins are normally dependent on the price of Bitcoin. BTC had experienced a serious downfall in November, too. It caused the overall decline of the cryptocurrency market and Binance Coin was only one of many altcoins affected by this crash.

Until the beginning of 2019, most of the time the price was around $5. In 2019 the value began to climb up. On April 3 it hit a maximum of $20. Understandingly, it coincided with Bitcoin's price growth. Later in April, the price broke a new record reaching $25.5. Note that Bitcoin didn't manage to regain its historical maximum while Binance Coin did it! In the following months, the price was rising and the maximum was updated several times reaching nearly $40 in June. In July the price started to decrease rolling back to $30 and then later to roughly $20. In late September the price declined further to around $16 but reached $20 again one month later. However, one more month has passed and the BNB was once again trading below $20. By the end of 2019, its price was $13 to $14. In the new year, the coin started to rise quickly. In February 2020, the price peaked at $27.

However, the later February days were quite shaky and then the infamous March of 2020 has come and brought the most disastrous downfall in the history of the cryptocurrency market. The lowest value was reached on March 12 when the BNB price dropped below $7. Since then, together with many other cryptocurrencies, Binance Coin was gaining value. The beginning of 2021 saw an incredible BNB price spike. In the first half of 2021, Binance Coin was growing quicker than most other big cryptocurrencies. In May of 2021 BNB was over $650 with market cap exceeding $100 billion (the third position among other cryptocurrencies). June, August, and November saw lower peaks. Nevertheless, the currency established itself among the absolute leaders in the industry as of February 2022.

The overall future of Binance Coin looks bright as this asset is associated with the most successful cryptocurrency exchange in the times when cryptocurrencies get popular and sustain value better than many fiat currencies affected by the financial crisis which is not going to end very soon.

As the next few years will be crawling out of the shadow of the economic problems of 2020, the cryptocurrency market will keep on rising against the fiat money market. We will say it again — the success and growth of the cryptocurrency market automatically mean the success of the Binance exchange's native token. Binance is not likely to lose its market dominance (or at least significance). The very fact that the company provides both centralized and decentralized platforms strengthens its potential. By the end of 2022, the price has a big chance to exceed $600.

More people affected by the crisis will turn to cryptocurrencies and will probably start with the established brand which is Binance. BNB token makes the use of Binance cheaper and more comfortable. These circumstances don't leave a chance for the BNB price to drop. This price will keep on rising. By the end of 2023, the value will be a bit above $900. The worst scenario is around $825 per 1 BNB. Most experts see that in 2024 BNB token will finally cross the $1,000 line. At best it will climb up to $1,397. The following year, the price is likely to reach $2,000.

It's hard to say if Binance will manage to keep its significance until 2030. The landspace is changing and yet Binance keeps up with the trends. If it continues to be a modern platform, the price of BNB token can reach the $15,000 mark by the end of 2030.

Jul 27, 2022 0
altcoins bnb price prediction binance price prediction cryptocurrencies binance coin cryptocurrency market native tokens
The opinions and assessments expressed in the text are the views of the author of the article and may not represent the position of Cryptogeek. Do not forget that investing in cryptocurrencies and trading on the exchange is associated with risk. Before making decisions, be sure to do your own research on the market and the products you are interested in.