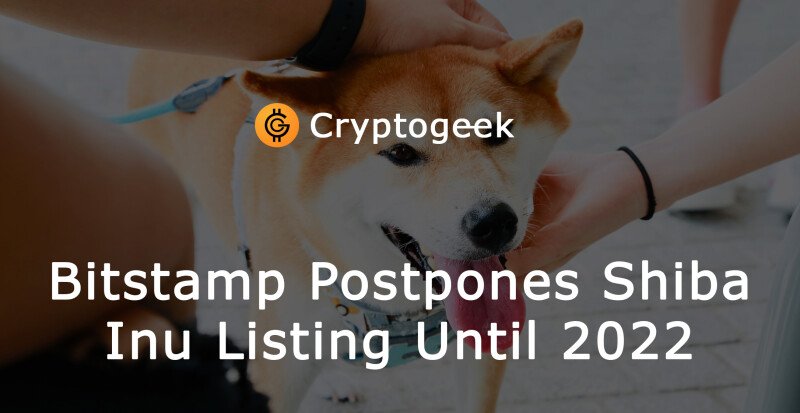 Europe's one of the largest crypto exchanges has earlier announced the listing of Shiba Inu, a famous meme cryptocurrency that has been under the spotlight for much of 2021. However, recently, the crypto exchange published a special update on the matter.

The crypto exchange announced that it has experienced some technical difficulties with Shiba Inu. According to the announcement made by the crypto exchange, Shiba Inu was put under some pressure as a result of this news, and the cryptocurrency continued to fall in value.

Bitsamp wrote on Twitter that there should not have been any worries among traders, as the crypto exchange has not changed its mind regarding the listing of Shiba Inu.

According to the post, the main reason for the decision is some technical difficulties with integration. The crypto exchange also added that they will continue this journey towards listing Shiba Inu, but it will be finalized in 2022.

However, it is yet unknown how the market participants will decide to deal with the Shiba Inu listing. Due to the huge interest of individuals in Shiba Inu, the price movement of this cryptocurrency has been truly amazing. Many believe that the listing on Bitstamp will make other crypto exchanges take similar steps in regard to this cryptocurrency as well.

When the exchange faced technical difficulties uploading the cryptocurrency meme, the integration of Shiba Inu onto the Bitstamp platform came to a halt. As a result, the platform's token listing has been discontinued. The list, which had been eagerly awaited by the community, has been put on hold indefinitely due to difficulties that the exchange is attempting to resolve.

When the coin was supposed to be live on December 9th, Bitstamp advertised it to the community, but they were having trouble getting it into their platform. The crypto exchange mentioned technical challenges that took longer to list in a tweet.

Once the integration process is done and the technical issues are resolved, Shiba Inu will be available on Bitstamp, Europe's largest cryptocurrency exchange. Shiba Inu has now visited all ten of the biggest crypto exchanges and is making its way down the list.

Impact of the Issues

The meme cryptocurrency's acceptance percentage skyrocketed in 2021, therefore delaying until 2022 to post it on Bitstamp will not detract from the project's success. It's the breakout star of 2021, and it's already made a few crypto billionaires.

Every coin's position on the exchange is significant since it increases the number of possible investors. A successful listing is frequently followed by a rally. Shiba Inu, for example, jumped from $ 0.000039 to $ 0.00054 when Kraken announced it would be accessible on their exchange in late November.

However, the Shiba Inu's subsequent listing on Kraken did not give long-term support to the cryptocurrency, and the currency now trades downward following its initial rise.  Shiba Inu's inclusion on Bitstamp had a huge influence since SHIB was able to achieve this capability less than two years after its launch.

Bitstamp is more than simply a trading platform. Although there are many crypto exchanges available in the market, Bitsamp is different as t it is the most trusted and user-friendly instrument for European investors. Bitstamp is Europe's largest cryptocurrency exchange, with 4.4 billion users globally. In 2021, however, Shiba Inu will no longer be available at Europe's largest crypto exchange.

But, as Europe’s leading crypto exchange noted, individuals should not be worried about this development as the crypto exchange will continue its efforts towards listing the cryptocurrency, which should happen in 2022.

Bitstamp is one of the largest crypto exchanges available in the market. It was created back in 2011 and it is offering traders numerous opportunities to trade cryptocurrencies. As of now, the cryptocurrency exchange offers individuals access to over 45 cryptocurrencies with very competitive trading conditions, including low fees.

The crypto exchange was first launched in Slovenia and it has expanded throughout the world over the years, first in the UK In 2014 and then in Luxembourg in 2016. The company also functions in the United States, where its office is based in New York. With over 4 million customers around the world, Bitstamp is an amazing crypto exchange for individuals around the world.

There are numerous cryptocurrencies available on the trading platform, including bitcoin, ethereum, litecoin, and many others. Because of such huge popularity around the world, the listing of Shiba Inu is a very important step towards a larger adoption of cryptocurrency.

cryptocurrency crypto bitstamp Shiba Inu
The opinions and assessments expressed in the text are the views of the author of the article and may not represent the position of Cryptogeek. Do not forget that investing in cryptocurrencies and trading on the exchange is associated with risk. Before making decisions, be sure to do your own research on the market and the products you are interested in.