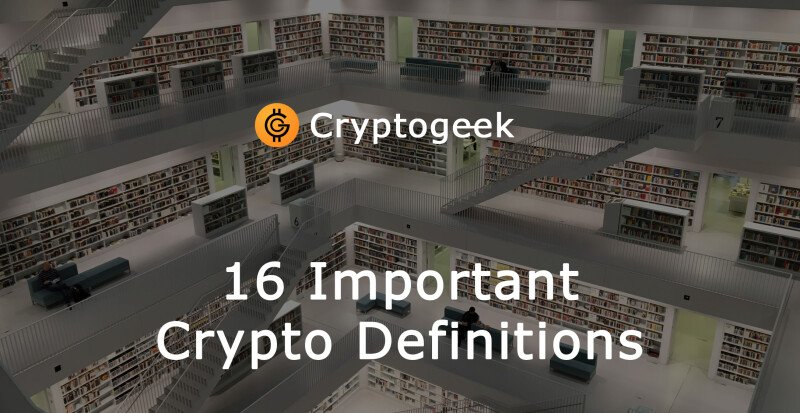 Here are sixteen crypto definitions for the beginners:

Altcoins (alternative coins) are cryptocurrencies that are not Bitcoin. While Bitcoin is the most famous and most valuable cryptocurrency, there are others that are also worth investing in. Altcoins include Ethereum, Litecoin, Ripple and many more.

However, each altcoin has its own unique features and challenges. The creators created some alternative digital currencies with a specific purpose in mind. For example, Litecoin came to the market to be a faster and more affordable alternative to Bitcoin. Others simply came for fun, and some you can use as a store of value.

A cold wallet is a storage device that stays offline or gets disconnected from the internet. The cold wallet is the opposite of a hot wallet, which is connected to the internet and is used for daily transactions. Investors and traders often use cold wallets to store large amounts of cryptocurrency.

They are often made of paper or plastic, and they can be paper money, USB sticks or even paper copies of private keys. A cold wallet is any type of wallet that has been created offline and then stored securely in a location where nobody can access it.

This is a process of distributing or dispersing functions or activities away from a central location. It is one of the most common buzzwords in the cryptocurrency community. This procedure conveys a number of different meanings depending on the context.

In general, the procedure refers to systems that are under a network of stakeholders. It can take the form of distributed ownership, where multiple stakeholders own and control different parts of the system. For example, in a decentralized financial system, individual investors would own and control their own crypto wallets.

Users can trade digital assets on numerous online exchanges. You may also purchase the assets with traditional currencies like US dollars. Digital assets are tradable 24 hours a day, 365 days a year.

The term Double spend refers to an attempt to make two different transactions on the same cryptocurrency. The attacker first spends the money once by sending it to one address, then he or she sends the same money to a different address. By doing this, the attacker hopes that both transactions will be confirmed on the blockchain and become a permanent part of it. If you're aware of double-spend attacks, you can protect yourself against them by waiting for confirmation of all transactions before releasing your goods or services.

A genesis block is the first block of a blockchain. It acts as the first transaction in a new chain. The genesis block gets hardcoded into a cryptocurrency's (i.e., Bitcoin, Litecoin, Dogecoin, etc.) client or wallet.

An Initial Coin Offering (ICO) is a fundraising mechanism in which new projects sell their underlying crypto tokens in exchange for bitcoin and ether. The majority of ICOs sell their tokens to raise money for a blockchain project, with the tokens acting as an alternative to shares in that company.

A node is a computer, linked to other computers and follows rules and exchanges information. Nodes in Bitcoin's peer-to-peer network host and synchronize an entire copy of the Bitcoin blockchain. They keep a bitcoin network operational.

The consensus technique Proof-of-Stake processes transactions and adds new blocks to a blockchain. A consensus mechanism is a way of verifying and securing entries in a distributed database. To become a validator on the network, users need to stake their cryptos.

Crypto rug pull is a new sort of cryptocurrency fraud. The phrase “pulling the rug out” inspired the name. A developer invites investors to a new cryptocurrency project, then withdraws before the project is complete. As a result, the investors get a useless currency.

The idea of trustlessness is fundamental to the blockchain, cryptocurrency payments, and smart contracts. Trustless implies you don't need to rely on a third party, including a bank or any other middleman between you and your crypto payments or holdings. You remain the sole owner of your funds.

A stablecoin is a digital currency linked to a stable reserve asset, such as the US dollar or gold. It intends to lessen volatility in comparison to unpegged cryptocurrencies, such as Bitcoin. Stablecoins better suit anything from day-to-day business to inter-exchange payments.

It is the procedure through which a network user gets selected to add the most recent set of transactions to the blockchain. In return, the user gets some cryptocurrency. The blockchain puts your crypto to work, which is why it receives incentives when staked.

Whales are the largest HODLers, with over $1 million in bitcoin in their wallets. HODLing is an industry name for people who hoard significant quantities of cryptocurrency without selling them with the expectation of profiting in the future. A whale can be a person, an organization or an exchange.

Whales occasionally place a large order to sell a large portion of their crypto tokens. They maintain a lower price than other sell orders. This produces volatility, which leads to a general decrease in the values of digital currencies.

The British daily newspaper Financial Times explains digital assets in detail. Their articles highlight the fundamentals of crypto assets. You can also go through their crypto glossary for more information. The team at Trading Browser explains also everything related to cryptocurrency for investors and traders in a full glossary and terminology list and if you're thinking of jumping into the crypto market, you need to learn about the common definitions and glossary.

cryptocurrency crypto glossary definitions
The opinions and assessments expressed in the text are the views of the author of the article and may not represent the position of Cryptogeek. Do not forget that investing in cryptocurrencies and trading on the exchange is associated with risk. Before making decisions, be sure to do your own research on the market and the products you are interested in.