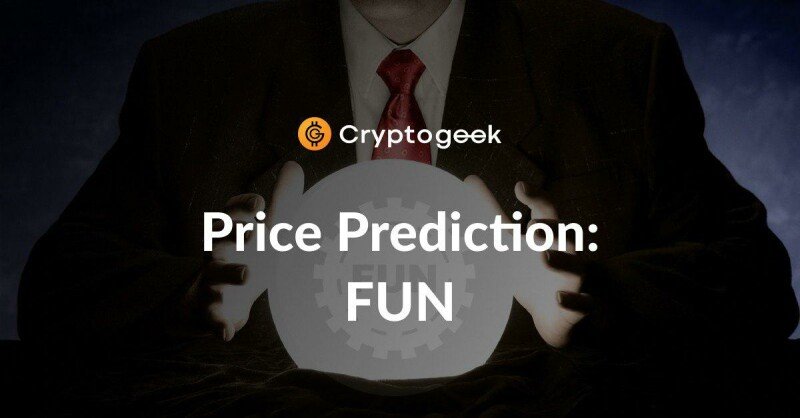 Nowadays, we are presented with a huge number of cryptocurrencies for investment. But how to invest profitably? Today we'll talk about FunFair. Should I buy FunFair in 2020? Will FunFair bring profit in 2023? Where the FunFair price comes in 2025? Will the FunFair price rise or go down in the future? The platform has something to show and has something to brag about.

FunFair (FUN) - the platform uses the Ethereum blockchain protocol to simplify the creation and Casino launch. This allows users to quickly create a casino and immediately start accepting players and making payments. Since the system is decentralized and does not have a server, there is no risk of interference from operators, or players, or hackers. The work of the platform is completely transparent, thanks to the use of blockchain and smart contracts. FunFair uses Fate Channels technology, which provides online games on demand. The effectiveness of games is ensured by the relatively low costs (10%) for network processing associated with other block casinos.

At the heart of FunFair is a peer-to-peer blockchain running on open-source Ethereum. Using the FunFair platform, companies can organize and support all kinds of online casinos and other areas of web entertainment and betting.

As everyone knows, the majority of online casinos use fraudulent algorithms that allow game organizers to intervene in the process and reduce the percentage of probability of winning. So, in the FunFair system, such fraud is completely excluded. And this, in turn, significantly increases the trust on the part of users, which means it improves the attendance and profitability of betting in the end. Using Ethereum smart contracts, the FunFair team has created a platform for the operation of safe and transparent game projects, and today it is worth a lot. FunFair platform and cryptocurrency developers had successful ICOs and have already launched an application for web browsers running on WebGL and HTML5 standards. Also, versions for mobile platforms are available, which significantly expands the scope of use of the created system. The above factors allow you to evaluate the positive prospects of FunFair 2020-2025 and provide the FUN cryptocurrency exchange rate with long-term trend growth.

In addition to the stated advantages, the following positive features of the FUN system and cryptocurrencies can be highlighted:

As part of the ICO held in 2017, the FunFair team raised more than $ 25 million, and not only ordinary investors, but also serious investment funds invested in FunFair tokens.

Then, in the entire crypto industry, the crypto winter came. After such an impressive rise, there followed a decline in the price of FunFair and at the moment its price is in the range of $ 0.005. At the time of writing, the price of FanFair cryptocurrency is $ 0.003982.

In accordance with the previous dynamics of Fun price growth and the advantages of FunFair described above, the prospects for 2020-2025 can only be towards the further development of the platform and the growth of the FunFair rate. We can see that the crypto winter is coming to the end and FunFair is starting to grow in value slowly. The closest target marks, which are likely to reach the price of this cryptocurrency in 2020 could be $0.01, in 2023 - $0.25 and 2025 - $0.4.

What does the FunFair rate depend on?

The platform’s native currency is the ERC-20 FUN token, available on Bitfinex, HitBTC, Binance, and other exchanges.

Like most other cryptocurrencies, the value of FunFair depends on the dynamics of the market, the activity of speculators and changes affecting the blockchain platform. The digital currency market has a direct impact on the value of Fun, even despite the activity and uniqueness of the platform, which could contribute to a rise in price.

The maximum cryptocurrency rate was recorded in January 2018 at $0.181780 in the wake of the rise in the price of Bitcoin during the correction in December 2017.

Altcoins are inextricably linked with Bitcoin, due to which digital gold has an impact on the entire cryptocurrency market, being the most famous and popular asset. Because of this, when trading FunFair it is important to keep track of the news related not only to the blockchain industry as a whole, but also to Bitcoin. Important for a detailed forecast on the cryptocurrency rate will also be news in the gaming industry and casinos, in particular.

How to get profit from FunFair?

As with most other cryptocurrencies, two strategies can be applied to FUN tokens:

- Long-term investment - purchase of cryptocurrency on corrections or simply on the market with an investment horizon of 2 years or more.

- Short-term/medium-term speculative - purchase of FUN tokens at the time of their local correction for a period from 1 day to several months.

The FunFair has become a clear example of the correct and accurate implementation of the blockchain in the economy. They began to consider it reliable, so today FunFair is considered the most suitable option for long-term investments. Considering that the FUN cryptocurrency forecast for 2020-2025 is a growth stage, you will not wait long for the result.