The richest Americans will become crypto investors by 2030! 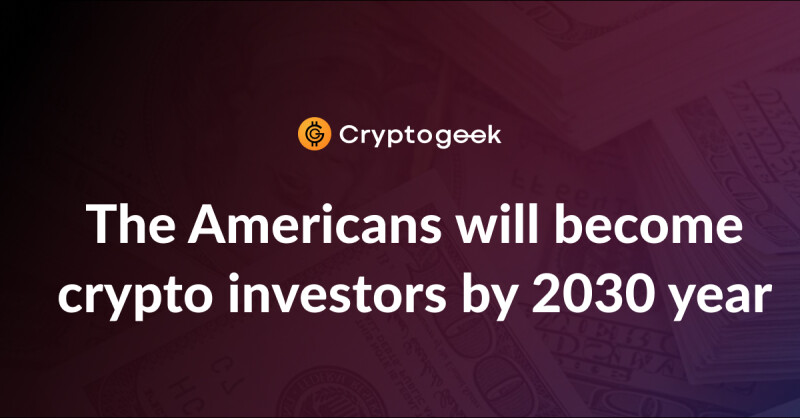 We are used to having Wall Street banks and stock markets at the head of the financial system. The main flow of US funds passes through them, and cryptocurrencies are still just at the dawn of a new financial era. But do not forget about one thing - now there is a change of generations and stereotypes as a result. According to Forbes, already by 2030, the standards of the American economic movement will determine millennials (people born from 1981 to 1996), to whom more than $ 68 trillion of capital will be transferred from their parents in a couple of decades. They will become the richest generation in US history. But most notably, millennials do not believe in banks and stock markets - they like digital technologies and cryptocurrencies more. This can fundamentally change the global financial system and provoke the growth of Bitcoin and other crypto assets to such heights that "to the moon" of 2017 will seem like a petty prank. Let's take a closer look!

Generations are replaced one after another, and each brings with it something new. They are classified by year of birth:

Historically, baby boomers, the richest generation in United States history, are now running the show. Their youth passed in the heyday of the American economy, when getting a quality education was cheap, and finding a well-paid job was easy. They have brought into the world the exponentially expensive real estate and the rapid rise of the stock market.

If the baby boomers made millions on this, then the millennials generation is forced to reap the negative fruits of the “prosperity” of that time. Studying is fabulously expensive, most of the apartments can only be obtained on credit, and compulsory insurance takes a huge part of the income. The problem was especially acute after the 2008 crisis. The life of millennials is more complicated than that of their predecessors, but soon they will occupy a crucial role in the economy and become the richest generation in history.

Research by real estate firm Coldwell Banker, referred to by Forbes, suggests the start of the Great Wealth Transfer. This means that the richest generation of baby boomers today is gradually transferring assets to their descendants - the millennial generation:

Changes await the economy because the views of Generation Y are very different from those of their predecessors. Millennials do not trust either banks or stock exchanges. They like new technologies, blockchain and cryptocurrencies.

So how will generation Y handle the money received? No, they won’t carry all the money to the bank, they won’t invest it in gold and they won’t  buy the assets on the stock market, as their grandfathers and fathers did. Most millennial Americans (71%) would rather go see a dentist than listen to long tirades of eloquent bankers.

And for good reason they do not trust the banks. Their childhood and youth fell on the zero years with all the ensuing consequences. During the first decade of the new century, the economy suffered from instability, and banks were the main culprits. The Millennials caught the 2008 crisis - the worst economic collapse since the Great Depression. From an early age they saw how banks burst and stocks on the stock exchanges collapse, how their relatives and friends lose their jobs.

"Stable" financial institutions, promising the "American dream", left many people penniless and even without a roof over their heads. US citizens lost $ 13 trillion dollars, 11 million Americans lost their homes, and another 9 million lost their jobs. The worst thing is that, in order to prevent the collapse of the entire financial system, the state solved the problems of banks and large companies at the expense of money from already affected taxpayers. But the conscience of the perpetrators of the crisis did not appear. For example, a couple of years later, Wells Fargo began opening credit and deposit accounts in the names of customers without their consent. Given all these "charms", it is difficult to disagree with the position of youth.

Almost twelve years have passed since 2008, but the opinion of the millennials has not changed:

But if most representatives of generation Y do not want to keep money in banks and invest in the stock market, then where will those $ 68 trillion of baby boomers inheritance go? That's right: they intend to invest part of the funds in digital assets. It is amazing how much youth confidence in cryptocurrencies has grown in recent years.

According to an independent research company Provoke Insights:

It is noteworthy that even if we move away from the issues of growing trust in crypto assets and assume that it remains the same, the situation around Great Wealth Transfer is still extremely attractive for the cryptocurrency market.

The beginning of the crypto era

The millennials generation is different from all previous ones. It was brought up on the digital evolution: the children of the 90s met the mass Internet, the transition from landline phones to smartphones, the advent of laptops and, of course, the emergence of cryptocurrencies. They really see how much the world has changed with the advent of innovations, and they feel the development prospects better than others.

Why do they need outdated gold and unprofitable stocks, if you can create a crypto wallet in a couple of clicks and trade on exchanges 24/7 without filling out a bunch of documents, not waiting for the opening of trading and not trusting centralized companies that are ready to get rid of shares for 1 cent thousand hardworking employees? Why make such sacrifices? For the sake of 10% per year? Are these worthy prospects? Cryptocurrencies for millennials are another matter. This is a chance to multiply investments and at the same time contribute to the creation of a new financial system - decentralized and honest.

Apart from 2014 and 2018, Bitcoin for all the time of its existence brought investors tremendous profits, even if the purchase was made during the price peak:

It is more than any stocks, bonds, derivatives or currencies. Invested in 2009, $ 50 would bring $ 100 million of income at the peak in 2017. After the crypto winter 2018, Bitcoin again began to grow and attracted increased interest from institutional groups.

Millennials believe in a new digital world of impartial mathematics. Undoubtedly, this faith will seriously affect today's economy, which will move from established principles to new high-tech solutions. There is a place for cryptocurrencies along with blockchain technology, which are developing more and more every year and are more readily accepted by the financial system.

Based on the above analyzes, it is safe to say that part of the $ 68 trillion received as a result of the “great transfer of wealth” will definitely go to investments in the crypto industry. Of course, there are risks that things will not go so smoothly. The stock market could collapse, real estate could become cheaper again, banks could burst. At the same time, older people ’expenses on medicine may increase, new unpleasant taxes and laws may appear, as well as other factors that will reduce the amount of money transferred. But at the same time there is an equally probable chance that the current state of baby boomers, on the contrary, will not fall, but will rise in price.

In any case, the old generation will be replaced by a new one. This cannot be avoided, and the process of the "great transfer of wealth" has already begun. A transfer of $ 68 trillion will not only change the life of the US millenials, but will also affect the entire global economy, as well as the state of the crypto industry. For clarity, if at least 1% of this amount is invested in digital assets, then the price of bitcoin will jump to $ 50.000, and maybe even higher. And if it is not 1%, but 10% −20%?